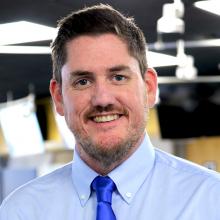 He previously served as night editor and copy-desk chief for the Arizona Republic, editing a wide range of award-winning stories, including two series — on the 2014 Yarnell Hill wildfire and the 2011 mass shooting near Tucson — that were Pulitzer Prize finalists. Before that, Snow, an Ohio State University graduate, worked as a reporter in Ohio and an editor for the East Valley Tribune in Mesa.

He has taught editing at Arizona State University; lectured at the Maynard Institute for Journalism Education and other organizations on credibility and accuracy, headline writing, and editing on deadline; and served as a judge for the Edward R. Murrow and Public Media Journalists Association awards.