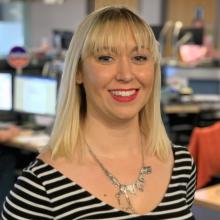 Monahan is a native, and growing up in the East Valley gave her an intimate familiarity with the Valley of the Sun. Eager to experience a new city, she left Phoenix for Tucson to earn her degree in classical studies from the University of Arizona with an emphasis in mythology. Several years later, her focus transitioned from history to history-in-the-making and news. Monahan went on to earn her master’s degree in international journalism from City University of London.

In London, Monahan worked with CBS News and The Times covering international news. On her return to Arizona, Monahan was the art and entertainment editor for the East Valley Tribune, before moving into broadcasting, where she worked in commercial radio as an anchor and reporter.

Outside of work, Monahan spends her time reading historical novels, exploring new restaurants in the Valley, and watching movies. Her love of film led her to create a movie review podcast and website. Monahan is also the vice president of the Phoenix Critics Circle.