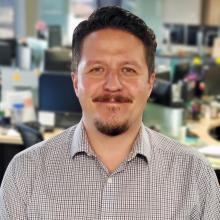 Rodrigo Cervantes is KJZZ’s bureau chief in Mexico City, where he was born and raised.

He has served as opinion writer, contributor and commentator for several media outlets and organizations in Mexico and the United States, including CNN, Georgia Public Broadcasting and Univisión. Cervantes previously worked as the business editor and editorial coordinator for El Norte, the leading newspaper in Monterrey and a publication of Grupo Reforma, Mexico’s premier news group.

Cervantes also held the editor position at MundoHispánico, a division of The Atlanta Journal-Constitution and Georgia’s oldest and largest Latino newspaper. He also participated as one of the first members of the Diversity Advisory Group for Cox Media.

In 2012, Cervantes was appointed as fellow for the Leadership Program of The New York Times/Nieman Foundation for Journalism at Harvard, as well as for the "Líderes Digitales" program from the International Center for Journalists. In 2010, he was awarded with the Poynter-McCormick Leadership Fellowship.

Cervantes graduated with honors in communication sciences and journalism from the Instituto Tecnológico de Monterrey (ITESM), Mexico City Campus. Later, he was granted the Fundación Carolina Scholarship from the Spanish government to obtain an MBA degree at San Pablo-CEU School of Business (Madrid).

Other awards include: the Power 30 Under 30 Award for Professional and Community Excellence in Atlanta, the Outstanding Alumni Medal from ITESM, and several José Martí Awards for Journalism Excellence from the National Association of Hispanic Publications (NAHP).