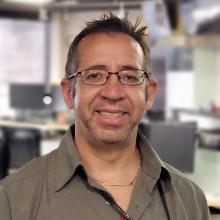 He leads a diverse team of reporters who work in the vast and remote Navajo Nation, in quiet immigrant communities in Phoenix and along the Mexican border.

Their work focuses on the enterprising efforts in these regions to bring them into the 21st century’s global marketplace; the cultures, curiosities and tensions as these places change; and on those weird, wild stories that make the U.S.-Mexico border such an inherently fascinating region.