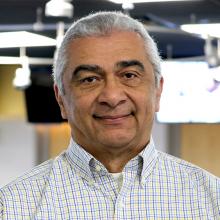 KJZZ’s News Director Al Macias is part of an elite class of trusted, veteran journalists who have covered Arizona news for more than 30 years.

Macias helps oversee daily operations for the KJZZ newsroom and Fronteras: the Changing America Desk. This is second nature for Macias, who is a National Association of Television Arts and Sciences Silver Circle Society member and an inductee of the Society of Professional Journalists Order of the Silver Key Society.

Macias began serving the KJZZ news team in October 2010, helping the station launch Fronteras: The Changing America Desk as the project's managing editor. He became the news director in January 2015. Macias, who has an extensive television background, is helping Fronteras Desk reporters disseminate reports using a multimedia platform that includes radio, web, video and social media tools to engage listeners across the globe.

He also is no stranger to building a news team from the ground up. Macias was part of the management team that launched the KNXV newsroom in 1994 and oversaw its growth from a staff of twenty to more than sixty in less than a year.  Additionally, he served in managerial roles at KPNX from 1981-1994 and as an assignment editor and manager for KTVK.

Macias takes great pride in his public service work, as well. He is a founding board member of the Arizona Latino Media Association and is part of the Raul H. Castro Institute Advisory Committee. In addition, he served Maricopa County’s communications department and spent time as a Partnership Specialist with the U.S. Census Bureau.

A Phoenix native, Macias earned a journalism degree from Arizona State University. He has been married since 1978 and has two adult daughters.