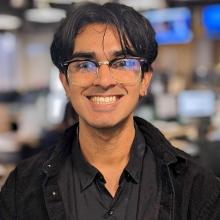 Rithwik Kalale is an intern for KJZZ. He graduated from Arizona State University with a bachelor’s degree in journalism, and is currently in his last semester of graduate school.

Kalale has worked as a community and culture reporter for the State Press, as a health reporter for Arizona PBS and as an editorial assistant for Zócalo Public Square. He also produced and hosted his own show called "POP48" for Blaze Radio, ASU’s student station. His goal is to cover both digital and audio stories that spotlight underrepresented groups.

Kalale is a Bay Area native, but splits his time between the U.S. and India, where his family lives. In his free time, Kalale likes to play video games, binge TV shows and attend concerts.