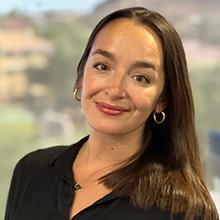 Alisa Reznick is a senior field correspondent covering stories across southern Arizona and the borderlands for the Tucson bureau of KJZZ's Fronteras Desk.

Prior to joining KJZZ, she covered border and immigration at Arizona Public Media, where she was awarded a regional Edward R. Murrow Award for her coverage of Indigenous-led protests against border wall construction.

Reznick started her career working in bilingual newsrooms and as a freelance journalist in Amman, Jordan. Her reporting on migration, refugees and human rights has appeared on PRX’s The World, Al Jazeera and Nova PBS, among others. As a recipient of the International Labour Organization's FAIRWAY Reporting Fellowship, she spent six months reporting on labor migration issues across Arab States.

Originally from Flagstaff, she likes climbing, being outdoors and Pluto.