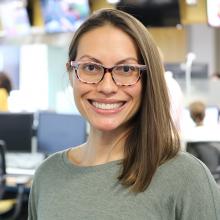 Kathy Ritchie has 20 years of experience reporting and writing stories for national and local media outlets -- nearly a decade of it has been spent in public media.

Most recently, she was the health and caregiving editor at Next Avenue, a national digital publication geared toward people 50-plus. While there, she oversaw a team of contributors, identified opportunities for new feature stories and series, and oversaw the completion of the 2021 John A. Hartford Foundation grant, one of Next Avenue’s largest active grants to date. Next Avenue is part of the Twin Cities PBS system.

Ritchie has spent most of her public media career in radio as a senior field correspondent at NPR member station, KJZZ in Phoenix. While there, Ritchie was responsible for the station’s largest newsroom collaboration, a 10-part series The State of Aging in the Valley. She also pitched and produced a four-part podcast, The Recovering Caregiver, based on her own personal experience with her mother who had frontotemporal degeneration and what life is like after dementia. The final episode was nominated for a Regional Edward R. Murrow Award.

Over the years, Ritchie has reported on the challenges facing LGBT elders, the topic of aging and intimacy, senior homelessness, ambiguous loss and grief, grandfamilies, and what it means to age in our society. Many of these stories have aired on NPR’s national magazine show, Here & Now.

And throughout the Coronavirus pandemic, Ritchie reported on the myriad challenges facing families, older adults and caregivers. That work led her to create a miniseries called, Caring in Crisis, in which she documented the experiences of “the helpers.”

Besides her professional experience in the aging space, Ritchie wrote about her mother’s journey living with dementia in a blog.

Ritchie got her start in television at ABC News and later at FOX News in New York City.