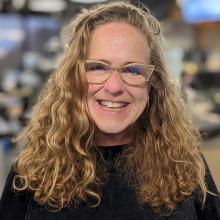 Amy Silverman is a journalist, author and teacher based in her hometown, Phoenix.

Over the last 30 years, she has covered everything from juvenile justice to the history of the Valley's food scene to the John McCain only Arizonans knew.

Her work has appeared on KJZZ, as well as the radio shows Here & Now, The Pulse and This American Life, and in The Forward, Literary Hub, The Guardian, New York Times, Washington Post, Lenny Letter, Motherwell, and Brain, Child. Previously, Amy worked for 25 years as a staff writer and managing editor at New Times, the alternative weekly in Phoenix.

Amy co-teaches the long-running Mothers Who Write workshop and is the co-curator of the live reading series "Bar Flies" at Valley Bar in downtown Phoenix as well as the co-editor of the essay collection "Bar Flies: True Stories from the Early Years."

Along with Phoenix, Amy's work has focused on issues related to disability, often weaving narrative with investigative reporting to tell stories about her daughter, Sophie, who has Down syndrome, and others with intellectual and developmental disabilities (IDD).

In spring 2021 Amy was a Visiting Nieman Fellow at Harvard University, where she developed Wordslaw, a storytelling workshop for people with intellectual disabilities.

In 2020, Amy worked with the Arizona Daily Star and Pro Publica's Local Reporting Network on "State of Denial," a year-long project focused on services for Arizonans with intellectual and developmental disabilities with an emphasis on making the work accessible to people with IDD.

Amy is a three-time winner of the Arizona Press Club’s Journalist of the Year award, most recently for State of Denial. The series was a finalist for the Anthony Shadid Award for Ethics in Journalism and the Online Newspaper Association’s Gather Award for Engagement Journalism. It also won first place for public service from the Arizona Press Club and first place in community service from the Arizona Newspaper Association, as well as the President’s Award from Lee Enterprises.

She’s a member of the advisory board of the National Center on Disability and Journalism, where she has updated two editions of NCDJ’s disability language style guide.

Amy's first book, "My Heart Can't Even Believe It: A Story of Science, Love, and Down Syndrome," was published by Woodbine House in 2016. A graduate of Scripps College (B.A. American Studies) and Columbia University’s Graduate School of Journalism (M.S.), she lives in Tempe with her husband, Ray Stern, the state politics and issues reporter for the Arizona Republic. They have two daughters.