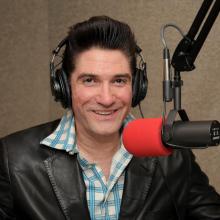 Spotlight on Bob Corritore: 30 Years of “Those Lowdown Blues”

It’s hard to believe it’s the 30th anniversary of “Those Lowdown Blues.” This popular KJZZ Sunday night show airs every week with five packed hours of blues music. For host Bob Corritore, 30 years at the microphone has been a happy whirlwind.

I talked to Bob about his experience producing “Those Lowdown Blues”.  He said, “It’s one of the things I really enjoy in my busy, busy life.  It gives me five hours that I get to sit and be with the music I love, and it’s such a joy to pull records and discover new songs each week”.

He produced his first prerecorded broadcast back in February 1984 and is thrilled to stop by the KJZZ studios every week. “I live life at KJZZ as kind of an outsider in a sense. I come in on Sunday nights, I don’t really see what goes on during the day,” Corritore said. “I just stay out of the way and do my thing and I’ve been allowed to do this for 30 years now.”

Corritore grew up in Chicago or as he calls it, “the hotbed of the blues.”

“When I was quite young I heard Muddy Waters on the radio, I think I was not even quite a teenager at that point. I fell in love with the music and from that point forward I followed it every way I could” he explained. Listening to Muddy Waters and other local talents like Otis Rush and Big Walter Horton lit a fire in him. He began hosting “listening parties” for his friends and playing DJ.

It was a natural progression to hosting his own show after moving to Phoenix in 1981. One day Corritore accompanied musician friend Louisiana Red to a performance at KJZZ.  This event inspired him to call KJZZ where he met the DJs from the “World of Music” show who helped him get his own blues show in 1984.

The show immediately found a huge audience.  “There are people that religiously listen to the show.  It’s really powerful that people have decided to block out five hours of their busy week to listen to what I have to offer,” Corritore said. “I’m only a small part of it.  I’m just the guy that chooses these wonderful selections that exist, pushes the buttons and announces the songs.  It’s the music I love and the music that’s the real star.”

His love of the blues does not end when he leaves the studio. “I have two rooms in my house that are filled from floor to ceiling with nothing but music” said Corritore. Bob is also the owner of the Rhythm Room in Phoenix and, in his spare time, he is an internationally touring harmonica player.

Blues are part of every aspect in his life but his number one joy is interacting with fans.  “It’s really pretty amazing when I see posts on Facebook and there are comments from all around the world,” Corritore shared. “I’ll walk into a blues event or a blues festival here in Phoenix and people will tell me how important the show is to them.  That means a lot to me.”

Here’s to the fans and the great blues music in the next 30 years.