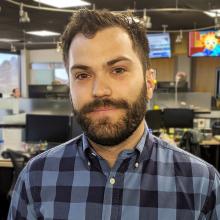 Scott Bourque is a reporter at KJZZ. He got his start in radio working as a reporter, photographer and producer for the American Forces Network, covering the tsunami relief operations in Japan, naval exercises in the Pacific, and combat operations in Afghanistan. He graduated from Northern Arizona University and earned a master’s in journalism from Arizona State’s Walter Cronkite School of Journalism and Mass Communication.

While at Cronkite, he helped produce the Robert F. Kennedy Human Rights Award-winning investigative project “Hate in America” as a fellow for News21. For this project, he traveled to Charlottesville, Virginia, to interview parties on both sides of the 2017 “Unite the Right” rally, and Portland, Oregon, where he embedded with the Proud Boys, a far-right activist group, as they held a rally that turned into a riot.

As a second-generation native Phoenician, Bourque loves finding and telling the stories that define and shape his hometown. In his spare time, he manages an Instagram page for Chloe, his father’s clumber spaniel, and enjoys the Phoenix area’s vibrant restaurant scene.