To Find A Plus-Size Prom Dress Bring Luck, Perseverance And Your Best Friend

Dozens of teenage girls dig through the racks to find a perfect prom dress and dozens more are lined up outside waiting for their turn on a Saturday in March.

Most of these dresses are donated and nothing has a price tag. Girls walk away with a free dress, shoes, purse and jewelry.

She’s in search of a long, poofy and ideally pastel dress that looks great with her skin. 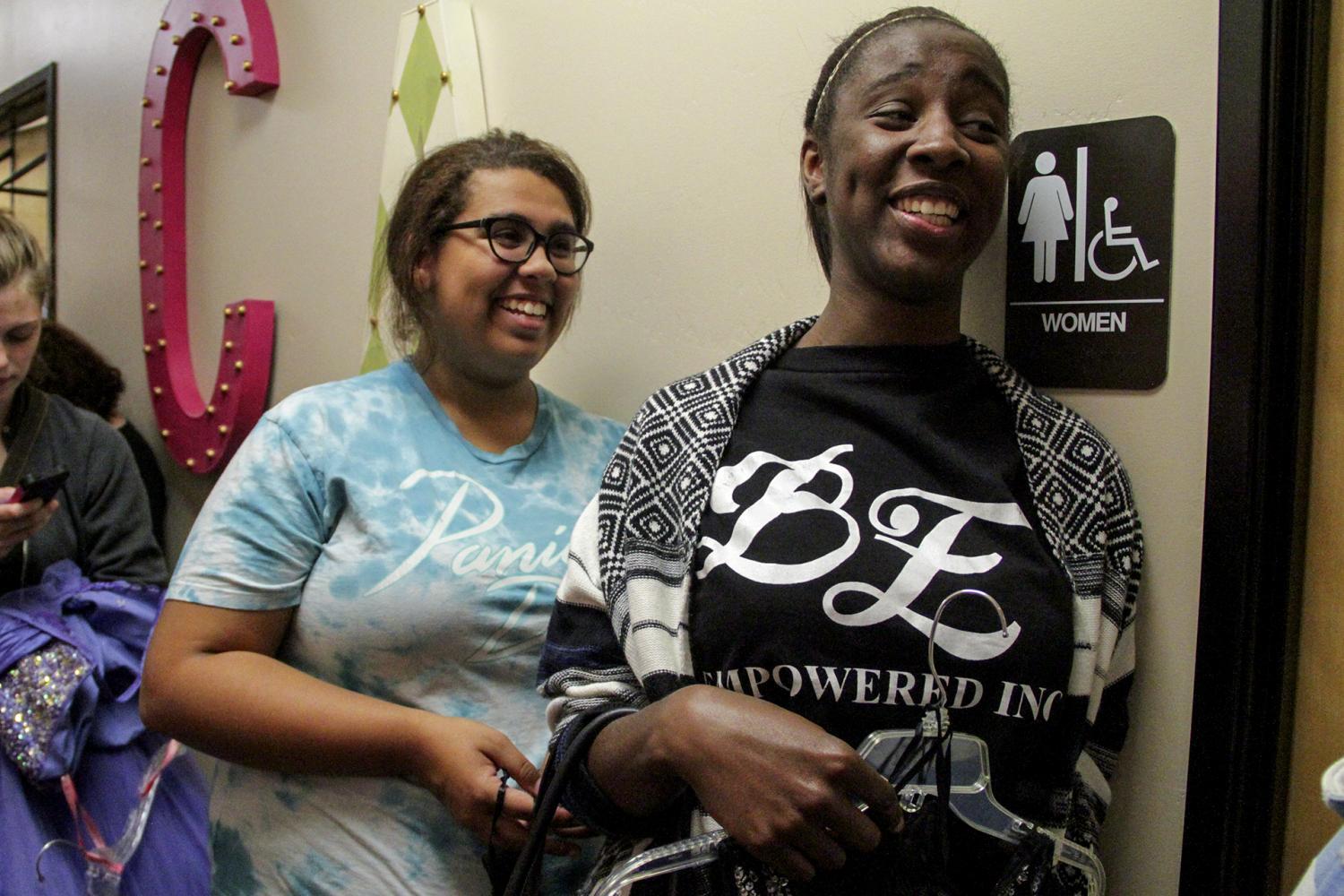 (Photo by Mariana Dale - KJZZ)
Shawna (left) and Daisha (right) are going to prom together with a group of friends. “I’m still expecting my promposal so I can reject you,” Shawna jokes.

Her friend Daisha Harrington doesn’t have a specific silhouette in mind, but is thinking bright and flashy.

“I just want to stand out,” Harrington said. “I don’t want to look like everybody else.”

She’s already done her shopping in the room for smaller sized dresses next door and has come to help Henry wade through the size 12 and larger room.

“I was like, I can feel her struggling and it’s a problem,” Harrington jokes.

“What about this?” she said, holding up a short white dress with rhinestones cutouts at the neck.

“Come on, you have really nice legs.”

“I know, I work really hard on them,” Henry said later in the dressing room.

She’s exasperated, her vision is a long gown.

“She always thinks that because she’s bigger that she can never find anything, but that’s not the case,” Harrington said of her friend. “She’s just difficult.”

Henry has been looking for her dress since last year.

“I’m definitely not the same size that everybody else is, so I’ve always dealt with the struggles of not having as many options as everybody else,” Henry said.

“You know I’m going to settle today,” Henry said after an unsuccessful trip to the dressing room.

“Yeah, you have no choice,” Harrington said.

This isn’t the first year of slim pickings for larger sizes.

“We do fundraising,” Morris said. “The money is used actually to buy the big dresses. We don’t buy any other size because there’s so many donations.”

This year they tried another new effort to get bigger sizes on the racks.

A non-profit called the Arizona Apparel Foundation sponsored a contest for high school fashion designers to create a plus-size dress to donate.

Nicole Begay is that student.

She’s a senior at the East Valley Institute of Technology and the winner of the contest.

“Sometimes designers just throw something out there, like ‘Kay, that looks good,’ but really you know they don’t really take consideration or do research on how the body is shaped,” Begay said.

She asked her cousins, who shop plus size, about their favorite pieces of clothing.

What Begay created with their inspiration was a long, black number with a sweetheart neckline and a sheer lace overlay she hopes will make the girl who finds it very happy.

“I want her to feel like everybody else feels when they find that perfect dress and they try it on like ‘this is so pretty and I look good in it,’” she said.

But Begay’s creation can’t be everyone’s dream dress. Back at the Cinderella Affair Shawna Henry is still searching.

Patty Morris dons her alter ego and steps in to help.

“They call me the dress whisperer, because I always look at the girl and I can find them a dress,” Morris said.

She reaches Henry with an armful of dresses pulled from the back.

“The dream, Daisha!” Henry exclaims to her friend.

A few don’t fit, the colors are too much on another. Then Shawna pulls on a long fuchsia gown with an empire waist.

Without resistance, it zips.

“It fits!” Henry said and grins before immediately turning to Harrington. “Do you like it?”

Henry mulls it over and weaves down the hallway to a bigger mirror before making her final choice.

“I feel a lot better about this one,” Henry said. “My only thing would be that if it were poofier it would be cool, but it’s flowy so it’s also cool.”

The girls wait in another long line, pick up matching silver clutches.

“We could match,” Harrington said. “We could be like matching attitudes, matching clutch.”

They laugh and leave with arms full of prom-ready finery.

Henry went above settling, but she has a message for prom dress makers and the fashion industry.

“They think that people who are plus sized, they just want to wear a tarp and that’s not really how it works,” Henry said. “We all have different shapes and body types.”