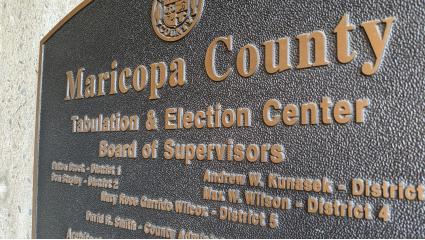 Maricopa County Board Challenges Senate To Enforce Its Latest Election Subpoena, If They Can

The Maricopa County Board of Supervisors rejected the latest subpoena of election-related materials made by two top Arizona state senators, in part because the Republicans in charge of the Senate don’t have enough votes to enforce the subpoena anyway.
41 minutes ago

Ducey: Universities Can Require Other Vaccines, Just Not COVID-19

Arizona Gov. Doug Ducey doesn’t plan to change current requirements for MMR vaccines despite his move this week to block state university requirements for students to get vaccinated against COVID-19. Press aide C.J. Karamargin told Capitol Media Services that’s because the MMR vaccines are in a different category.
June 18, 2021

Ducey Tries To Drum Up Support For $12.8B Budget And Tax Cut

Unable to advance his proposed $1.9 billion permanent tax cut at the Arizona Capitol, Gov. Doug Ducey is now going public — or at least to business interests — in a bid to build public pressure.
June 17, 2021

After more than a year, Scottsdale will resume in-person City Council meetings on Tuesday.
June 17, 2021

After the recent Mexican midterm elections, Mexico City got its first migrant congressperson, who will represent citizens living abroad. The elected official lives in New York City and promises to build stronger ties between Mexico’s capital and the U.S.
June 17, 2021

No Masks Required At Most Phoenix City Buildings

Effective Thursday, masks and social distancing are no longer required for fully vaccinated people in most city facilities in Phoenix.
June 17, 2021

President Joe Biden and Vice President Kamala Harris are speaking at the signing of a bill to make Juneteenth a federal holiday and commemorate the end of slavery in the United States. Watch their remarks live.
June 17, 2021

What The Endless Frontier Act Could Mean For Arizona's Universities

The U.S. Senate just did something relatively unusual in Washington, D.C., these days: It passed a bipartisan bill. It was originally dubbed the Endless Frontier Act and it amounts to a big investment in U.S. technology and innovation so that we can compete with China. I
June 17, 2021

The Arizona Senate’s audit of the 2020 presidential election in Maricopa County is ending — or at least the hand recount at the Veterans Memorial Coliseum is wrapping up. But the first-of-its kind audit, which was met with widespread derision, has drawn interest from politicians in other states — and its legacy is likely to be long-lasting.
June 17, 2021

Senators Would Stop 'Micropolitan' Label For 144 US Cities

Some lawmakers are trying to stop 144 American cities from losing their designations as “metropolitan areas.” The federal government wants to update the standard from at least 50,000 residents in a city's urban core to a minimum of 100,000 people.
June 17, 2021

Phoenix is moving forward with plans to turn a former Kmart store into a center that offers education and workforce training. The City Council wants to transform acres of asphalt and an empty 118,000-square-foot building into an innovation center.
June 17, 2021

A hotel in central Phoenix will honor an Arizona Republic reporter killed by a car bomb 45 years ago. In June 1976, Don Bolles drove his white Datsun to the Clarendon Hotel. The investigative reporter, known for covering corruption in the racing industry, thought he was meeting a potential source.
June 17, 2021

Mexico’s elections on June 6 were historic for the sheer number of open seats to be filled at the federal, state and local levels. But after votes were tallied, another milestone emerged: A record number of women were voted into office this year. It’s one more step in a years-long battle for political parity in the country. But there’s still a long way to go.
→ More News From The Fronteras Desk
June 17, 2021

Former U.S. Rep. Matt Salmon announced Wednesday that he is running for governor of Arizona, a post he narrowly lost 18 years ago to Democrat Janet Napolitano.
June 16, 2021

A trial court judge has thrown out several legal challenges to a new voter approved tax on high-earning Arizonans. Tuesday's ruling leaves just one additional issue raised by challengers to Proposition 208 in play at the trial court.
June 16, 2021

Debate continues in D.C. over the proposed For the People Act, which deals with issues like voter access, election security and redistricting, among many others. Among its supporters is former U.S. Attorney General Eric Holder, who served in the Obama administration and is currently chair of the National Democratic Redistricting Committee.
June 15, 2021

Brnovich To U.S. AG: Stay Out Of Election Audit

In a letter, state Attorney General Mark Brnovich is warning his federal counterpart to stay out of the way of the Maricopa County ballot audit. Last week, U.S. Attorney General Merrick Garland suggested ballot reviews, like the one in Arizona, are “based on disinformation.” He also said his agency is watching and may take action.
→ Why Republican Mike Broomhead Has Soured On The Election Audit
June 15, 2021

The Yavapai County Recorder’s Office is warning residents about solicitors trying to obtain personal voting information by impersonating county employees. Both Prescott police and the Yavapai County Sheriff’s Office have been alerted to the incidents.
June 15, 2021

Sonora, Arizona's neighbor to the south, recently elected a new governor — and did so in a fairly convincing fashion. To get a better sense of how that election played out and its implications for the Arizona-Sonora relationship, The Show spoke with KJZZ's Murphy Woodhouse, who is based in Sonora's capital Hermosillo.
June 14, 2021

In a column over the weekend in the Arizona Republic, author and Brookings Institution Senior Fellow Jonathan Rauch wrote that the current process is part of creating public doubt about broader U.S. norms — not just our elections.
June 14, 2021

Why Mike Broomhead Has Soured On Election Audit

The counting continues at Veterans Memorial Coliseum, as do the headlines generated by the state Senate’s ongoing audit of Maricopa County ballots and election equipment. Mike Broomhead, host of the Mike Broomhead Show on KTAR, was OK with the audit when it started, but has since soured on the process.
June 14, 2021