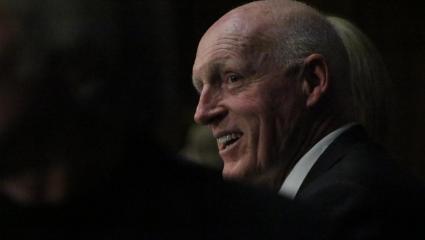 A campaign to recall House Speaker Rusty Bowers failed on a technicality. Petitions to recall the Mesa Republican were turned into state officials without a crucial form as required by law.

The leader of Democrats in the Arizona House of Representatives is stepping aside amid criticism within her own caucus and a challenge in leadership elections planned for this week.
Nov. 9, 2020

President Donald Trump made up more ground on President-elect Joe Biden in Arizona on Sunday. Biden led Trump by nearly 17,000 votes as of Sunday evening. The Secretary of State’s Office reported that roughly 77,000 ballots remained uncounted as of that time.
Nov. 8, 2020

Prominent elected Democrats from across Arizona are excited to get to work under a Biden-Harris administration. But with a divided congress, Democrats and Republicans will have to find some common ground if they want to get anything done.
Nov. 8, 2020

Attorneys for the Trump campaign and the state and national Republican parties have filed a new complaint over ballot-counting procedures in Maricopa County. The lawsuit, filed Saturday, followed the withdrawal of another lawsuit.
Nov. 8, 2020

Phoenix Mayor Kate Gallego welcomed the election of Joe Biden and Kamala Harris to the White House. She says that Biden faces a historic number of challenges, and one of the biggest challenges is dealing with coronavirus.
Nov. 7, 2020

The Navajo Nation voted for Biden by a margin of 97%, according to early data. Navajo Nation President Jonathan Nez credits Indigenous turnout and outreach efforts with Biden's victory, and says he looks forward to working with a Biden Administration.
Nov. 7, 2020

Joe Biden is addressing the American people as president-elect after a win in Pennsylvania put him over the 270 electoral-vote threshold needed on Saturday. Watch his remarks live. Video is expected to begin around 6 p.m. Arizona time.
Nov. 7, 2020

Democrat Mark Kelly is Arizona’s senator-elect, defeating the incumbent Republican Martha McSally, who was appointed to the late-Sen. John McCain’s seat after losing the 2018 Senate election. Washington Post exit polls from 2018 and 2020 showed that health care may have been the common denominator in McSally’s losses.
→ More Arizona Election News
Nov. 6, 2020

Political pollsters took a lot of flak for getting predictions about the 2016 presidential election so wrong, and it’s happening again this time around. Like the weather, political campaigns can shift quickly, making it tough to know where they'll end up.
Nov. 6, 2020

Penzone Sets Record For Most Votes For County Official

Maricopa County Sheriff Paul Penzone is declaring victory in his race for reelection against Republican Jerry Sheridan. Penzone has broken the record for most votes received in Maricopa County, and for two elections in a row, he's received more votes than either presidential candidate.
Nov. 6, 2020

Faith Leaders Pray For Patience During The Election Process

Valley faith leaders are asking for patience and prayer as the final votes are tallied in the general election. Community leaders from Arizona held a virtual interfaith prayer service Thursday evening to celebrate successful voter engagement and mobilization of local organizations.
Nov. 6, 2020

In a statement, Senate President Karen Fann and House Speaker Rusty Bowers said, “The people of Arizona want leaders who are focused on economic prosperity and safe communities, not progressive politicians who support the failing policies of California and Illinois.”
Nov. 6, 2020

Maricopa County Races: Where Do They Stand?

The latest iteration of election-related misinformation in Arizona took an unexpected form this week. "SharpieGate" has an amusing, if not unimaginative ring to it, but the nickname given to fast-flying rumors of uncounted ballots that were filled out with Sharpie markers.
Nov. 6, 2020

#AZNumbers is a weekly segment featuring thoughts and insight into Arizona's economic news. This week's number: 207. Listen to the KJZZ business block with Heather van Blokland weekdays at 6 p.m. on 91.5 FM or stream it on KJZZ.org.
Nov. 6, 2020

An attorney defending election officials in metro Phoenix in a lawsuit over the use of Sharpies to complete Election Day ballots said the remedies proposed by those behind the challenge are unworkable.
Nov. 6, 2020

Arizona voters have approved a new tax on high-earning residents that could bring in nearly $1 billion of new revenue annually to the state’s underfunded school system. The approval of Proposition 208 came after the state’s business community spent more than $18 million trying to defeat the measure backed by many educators and progressive groups.
→ More Arizona Education News
Nov. 5, 2020