Monitor Invites Public To Give Feedback On MCSO 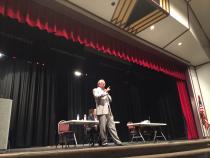 The public had its first chance on Thursday night to meet the court-appointed monitor in the racial profiling case against Sheriff Joe Arpaio's office. Community members aired their grievances with the sheriff's office in a public comment period.

Robert Warshaw led the bilingual meeting. After U.S. District Judge Murray Snow’s 2013 ruling that the sheriff’s office had discriminated against Latino drivers, Snow appointed Warshaw as monitor. That means it is Warshaw’s job to oversee whether the sheriff's office complies with court-ordered reforms.

Warshaw is a former deputy drug czar under President Bill Clinton. He has served as the independent monitor for police departments in the cities of Oakland, Niagara Falls and Detroit.

At the meeting, Warshaw said he and his team want to hear from the community.

Warshaw said his team has established an office downtown and will respond to emails and phone calls.

During a public comment period on Thursday night, community members expressed deep distrust of the sheriff’s office, and doubts about the possibility for change.

"He hasn't learned his lesson," said one young man from the audience, referring to Arpaio. "I doubt more police officers policing each other is the answer. I have faith in you guys, the people. We were the original monitors and I want to tell you the monitors that we are going to be monitoring you guys."

Warshaw responded without missing a beat.

At Warshaw’s invitation, several members of the sheriff’s executive staff attended the meeting, including Chief Deputy Jerry Sheridan. Attorneys from both sides of lawsuit also attended, as did a plaintiffs in the case, Lydia Guzman.

Arpaio was not there.

Spokeswoman Lisa Allen said Arpaio felt his presence would be a distraction, so he had opted to watch a streaming video of the meeting instead.