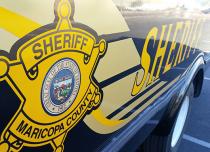 The Maricopa County Sheriff’s Office is 40 percent compliant with a 2013 court order to end racial profiling.

While many hoped more progress had been made toward compliance, Warshaw said some of the agency’s efforts have yet to be felt in the community.

“I just wish the citizens of Maricopa County would know the massive effort by the Sheriff’s Office to get into compliance,” said Joe Popolizio, one of Sheriff Joe Arpaio’s civil contempt attorneys who attended the meeting.

“No matter how hard people in the middle levels of the agency, down through the rank and file, are working to try to respect constitutional rights and to get in compliance with the federal court order, if the sheriff is blocking, you’re not going to see progress,” Wang said.

The ACLU will soon file court motions to try to speed up MCSO’s efforts to comply, Wang said.