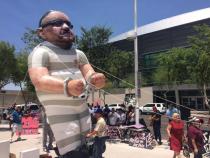 Jude Joffe-Block/KJZZ
Outside the courthouse, where the judge is deciding contempt remedies against Sheriff Joe Arpaio, protesters held a rally.

The federal judge who found Maricopa County Sheriff Joe Arpaio in civil contempt of court for violating his orders in a racial profiling case said at a Tuesday hearing that he is still considering whether to refer the sheriff and others for a possible criminal contempt prosecution.

A final ruling on civil remedies is not expected until later this summer.

Tuesday’s hearing came after U.S. District Court Judge Murray Snow issued a searing ruling on May 13 finding Arpaio and others intentionally violated his orders, including a 2011 order to stop making immigration arrests. The judge found the sheriff’s office never implemented the order, meaning deputies arrested and detained suspected unauthorized immigrants who could not be charged with crimes for 17 months after the judge ordered the practice must stop.

Outside the courthouse protesters sang “We Shall Not Be Moved” in both Spanish and English and chanted for Arpaio to be arrested and face criminal charges. They floated a giant balloon of the sheriff wearing prison stripes.

At the end of the hearing, Snow gave the parties the next month to reach common ground on some civil remedies for the contempt finding, including procedures for redoing certain internal investigations into misconduct, reforming internal affairs policies, and giving some of the sheriff’s internal oversight authority to an independent entity.

Heading into the hearing the parties had already made some progress agreeing on details for one civil remedy: a compensation program to provide money to people who were wrongfully detained by sheriff’s deputies in violation of that 2011 order.

Snow said successful claimants should get a minimum payout of $1,500. He also indicated he believed Maricopa County would likely be liable to pay for the program, despite arguments from the county’s lawyer to the contrary.

Taxpayers have already spent $40 million to date on the litigation and reforms related to the underlying racial profiling case that began eight years ago.

Lawyers representing the plaintiffs in the racial profiling case have asked the judge to find the county liable and make Arpaio pay $300,000 out of pocket toward the compensation program. At Tuesday’s hearing Snow questioned the plaintiffs about his authority to make the sheriff personally pay for it.

“People who commit contempt are liable for harms resulting from the contempt,” said attorney Stanley Young, who represents the plaintiffs.

Snow said that he planned to have a third party redo some compromised internal investigations that did not adequately examine whether sheriff’s commanders had engaged in misconduct. He said that means a handful of the department’s leaders, including Chief Deputy Jerry Sheridan, could be subject to discipline and possibly termination.

But Snow acknowledged that Arpaio as the elected sheriff would be exempt from that discipline, and the judge said that inability to punish Arpaio with civil remedies may be a reason to refer the matter to a prosecutor to pursue criminal contempt charges.

“If we are going to reinforce the authority of this court to protect the constitutional rights of the members of the plaintiff class … the sheriff has to have some personal interest in the process so he doesn’t engage in this behavior again,” Snow said.

Arpaio’s lawyers argued the sheriff’s offer with Sheridan to donate $100,000 to a Latino civil rights organization was an adequate alternative.

Masterson told reporters afterward the offer reflected Arpaio had “skin in the game.”

He also said the sheriff is willing to adopt many other reforms that plaintiffs and the judge want.

Arpaio’s criminal defense lawyer Mel McDonald told Snow a criminal referral would be devastating for Arpaio and for the county.

“Anytime you have the top law enforcement officer and possibly others involved in a trial, that is going to take away from his duties and responsibilities to the taxpayers,” McDonald told reporters after court.

But Cecillia Wang of the American Civil Liberties Union disagreed with McDonald’s characterization.

“There are a lot of people in this county who have been harmed and injured and terrorized by this sheriff thumbing his nose at federal laws, and this court’s orders,” Wang told reporters. “They are the county too and they deserve justice.”

The plaintiffs had asked the judge to refer Arpaio and Sheridan for criminal contempt charges, as well as possibly perjury and obstruction of justice charges.

Snow said in court that he had not asked plaintiffs to weigh in on whether there should be a criminal referral. He also said the U.S. Attorney’s Office can choose to prosecute those crimes without a referral.

While many expected this hearing to be one of the last steps in the civil contempt proceedings that began more than a year ago, there were indications on Tuesday that there could be more civil contempt matters in the future.

Lawyers for the plaintiffs also raised new questions about whether the sheriff’s office had violated the 2011 order for longer than 17 months. They said they had discovered new records suggesting the prohibited immigration detentions may have extended into 2015.

The judge indicated there could be further contempt hearings to evaluate that matter as well.