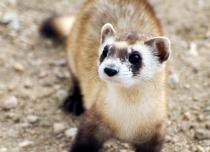 (Photo courtesy of U.S. Fish and Wildlife Service)
The black-footed ferret was added to the endangered list in 1967.

The Tucson-based Center for Biological Diversity this year celebrated Endangered Species Day by highlighting 10 places saved by endangered species in them. These areas include Arizona’s San Bernardino Wildlife Refuge, Lake Erie and the Pacific Kelp Forests.

Randy Serraglio is Southwest conservation advocate for Center for Biological Diversity, talked about the report found about the role of the Endangered Species Act beyond the actual species being protected.

For another perspective, we turn to Audrey Mayer, an associate professor of ecology and environmental policy at Michigan Technological University.