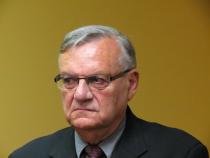 Maricopa County Sheriff Joe Arpaio has agreed to a list of proposed remedies after a federal judge found him and three of his aides in contempt of court. Meanwhile, the plaintiffs in the case are asking the judge to refer the case to a prosecutor to pursue criminal charges.

Snow set a hearing for May 31 to determine what must be done to ensure the sheriff’s office follows court orders, as well as how to compensate people who were wrongfully detained during a 17-month period in which the sheriff’s deputies continued making immigration arrests after the judge ordered that practice must stop.

Snow proposed making major changes to the Internal Affairs division in charge of investigating officer misconduct, including appointing an independent entity to assume control over certain investigations and resulting discipline. He invited all parties involved in the case to weigh in on his proposals by Friday.

The filing from Arpaio’s attorney began by saying the sheriff and his aides were “devastated” to read the court’s contempt finding.

“They desire to do everything in their power to restore the court’s and community’s confidence in them and the Maricopa County Sheriff's Office,” Arpaio’s attorneys wrote.

So far, Arpaio and Chief Deputy Jerry Sheridan have volunteered to personally donate $100,000 to a Latino civil rights organization and publicly acknowledge their violations of the court order.

The sheriff agreed to cede a limited amount of control over certain internal investigations to an outside party. He said in cases of officer misconduct involving Latino motorists, an outside entity could review the investigation and determine the final discipline.

Arpaio, however, said he wants to retain control over any decision to terminate an employee, which promises to be a sticking point with the plaintiffs in the case.

The sheriff agreed that individuals who can prove they were unlawfully detained by his deputies in violation of the 2011 order should get monetary damages, though the various parties are at odds over several details — including who should pay.

A lawyer for Maricopa County argued in his filing that if sheriff’s employees willfully violated court orders, the county was not liable for those actions.

“The county respectfully requests that the court, in fashioning remedies, bear in mind the inherent unfairness of saddling taxpayers with substantial financial burdens for the misdeeds of a few individuals the court has found to have engaged in contemptuous conduct,” attorney Richard Walker wrote.

Lawyers representing the Latino plaintiffs who initiated the underlying racial profiling lawsuit are asking the judge to make Arpaio personally pay $300,000 toward the program. They also argue the three aides found in contempt, along with the county, should also be liable to pay for the program's costs beyond the $300,000 cost.

“[F]or more than eight years, Sheriff Arpaio has defied this Court and his obligations in the litigation,” lawyers for the plaintiffs wrote. “He has proved unwilling to comply with the law.”

They argued civil remedies alone will not be adequate to address the sheriff’s wrongdoing. They requested the judge ask the U.S. Attorney’s office to investigate Arpaio and Sheridan for criminal contempt, and possibly other federal charges — including perjury and obstruction of justice.