Letters To FLDS Leader In Prison Come Under Scrutiny 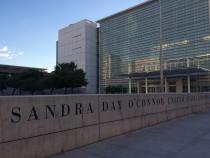 New details emerged Monday in federal court about mail that Warren Jeffs, the incarcerated leader of the Fundamentalist Church of Jesus Christ of Latter Day Saints (FLDS), receives in prison.

This information came out in testimony in a civil rights trial against the towns of Colorado City, Arizona, and Hildale, Utah, on the Arizona-Utah border. The U.S. Department of Justice alleges that the towns’ police forces and elected officials worked as arms of the church and that city officials discriminated against non-FLDS members.

Jeffs is in prison in Texas for child sexual assault and at one point received approximately 1,000 to 2,000 pieces of mail a day according to court testimony by Jennifer Smith, an employee of the Texas prison system. Smith oversees technical operations of criminal mail rooms for the Texas Department of Criminal Justice, and one of those mail rooms is at the Powledge Unit in Palestine, Texas, where Jeffs is incarcerated.

Smith also said some of the letters Jeffs wrote could not be sent out of the prison because they were not understandable or appeared to be written in code.

The federal government presented a letter written to Jeffs by former mayor of Colorado City George Allred, asking Jeffs who should be made a city marshal. It said, “If the lord has some men prepared who he wants to go into the police academy, their names would be helpful.”

The Department of Justice is using this to build its case that city officials and police worked under the direction of church leaders, even during Jeffs’ incarceration.

During cross-examination of Smith, Colorado City defense lawyer Jeff Matura read Smith an exhaustive list of current town officials and members of the police department, asking her if she had ever seen a letter to or from Jeffs and any of them. She said no for each one.