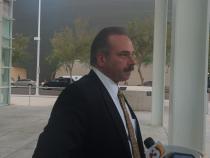 A volunteer posse leader called to testify in the contempt of court case against Maricopa County Sheriff Joe Arpaio broke his silence Thursday afternoon to say the sheriff had not ordered an investigation of the judge in the case.

The unexpected testimony came after Cold Case Posse leader Mike Zullo spent the entire morning refusing to answer questions and invoking his Fifth Amendment right to not incriminate himself.

Zullo is a key witness for that question, since he was assigned to the sheriff’s mysterious Seattle investigation that enlisted the help of confidential informant Dennis Montgomery, a self-proclaimed CIA and National Security Agency whistleblower. Montgomery provided the sheriff’s office with flowcharts and timelines that attempted to link Snow in a purported anti-Arpaio conspiracy with the U.S. Department of Justice and the law firm of Covington & Burling, which represents the plaintiffs in the racial profiling case.

Arpaio and his chief deputy have denied they asked Montgomery to create those documents.

They previously testified they hired Montgomery as a confidential informant because he claimed to have evidence he had taken from the CIA that proved the federal government was illegally obtaining sensitive identity information on Maricopa County residents, including breaching their banking records. They also testified they no longer believed Montgomery was credible.

All Thursday morning, plaintiffs’ lawyer Stanley Young asked Zullo about the Seattle investigation, and about looking up information on Snow.

Young also played long audio segments that Zullo had recorded of various meetings. Those audio segments included discussions with Montgomery, as well as an October 2013 meeting between Arpaio and Timothy Blixseth, a former billionaire who encouraged the sheriff to begin working with Montgomery.

Each time Young asked Zullo a question, Zullo said he was taking the Fifth and didn’t answer. By lunch time, Zullo had invoked his Fifth Amendment right more than 200 times.

After lunch, though, Zullo broke his silence. First he responded to a line of questioning by the sheriff’s lawyers in which he denied looking for information on Snow.

Then it was Young’s turn to ask a final round of questions. Young asked Zullo about a reference Montgomery made in an email to Zullo about receiving mixed messages about whether to produce information on Snow.

In response, Zullo erupted with an unexpected outburst.

In a loud voice that sometimes seemed to be on the verge of tears, Zullo said the plaintiffs had it all wrong: Snow was a victim of identity theft, not the target of the Seattle Investigation.

“Mr. Young, Judge Snow was a victim in that database, like I am a victim,” Zullo said, adding the names of other people he alleged were also victims, including Donald Trump and one of the sheriff’s lawyers, Michele Iafrate.

“Sir you were a victim,” Zullo said directly to Snow. “I never did anything to hurt this man.”

Arpaio also previously testified that Snow was a victim.

According to Zullo, Snow’s name came up after Montgomery claimed federal judges were among those being victimized by the government’s illegal surveillance program. To test the claim, Zullo said they looked up the name of the judge who had ruled against Arpaio in the racial profiling case. He said once they found Snow’s full name, they entered it in Montgomery’s database and saw the judge’s personal information had been collected.

Zullo said it was his job to try and gain Montgomery’s trust and convince Montgomery to produce enough evidence about the government’s data harvesting program so the sheriff’s office could hand over the investigation to the FBI.

Zullo referred to his work with Montgomery as a “brain-damaged dance.” He mentioned he was never paid for his work, which he did as a volunteer. “I did it because this is my community ... you are sitting here trying to paint me a criminal.”

“Sheriff Arpaio didn’t do this, he didn’t instruct us to look into this judge,” Zullo said outside the courthouse. “I think you can see from my rather emotional testimony that this was about the people of Maricopa County. There were 150,000 people who had the potential to be victimized.”

Zullo told reporters it was never his intent to invoke the Fifth Amendment, but he had done so initially because he does not have a lawyer and wanted to protect himself.

Zullo has said in his motions to the court that he fears criminal prosecution since the plaintiffs in the case suggested in a court filing that some members of the sheriff’s team may be guilty of certain federal crimes for working with Montgomery with alleged classified records taken from the CIA.

But Young said after court there is evidence the sheriff’s team was in fact interested in finding information on Snow.

For example the plaintiffs have presented a text message that Zullo sent to an MCSO sergeant at the end of 2013 that references Snow. In the text, Zullo referred to Montgomery as “OZ.”

“Received this from OZ just a little while ago,” read the text. “He’s mapping out cell phone calls and then line calls back to 2009 involving Judge Snow. The stuff looks promising.”

Months later in an email Zullo wrote to Montgomery, Zullo accused him of “phony information you handed MCSO about Snow.”

Plaintiffs have also shown that Arpaio jotted down notes focused on Snow after receiving a timeline from Montgomery linking Snow in the purported conspiracy.

“If you have a court ordering you to obey the law, your reaction should not be to dig up information on the judge, and that is what happened in this case,” Young said. “And we think that is wrong and ought to be the basis for an additional remedy.”

Zullo is expected to return to the stand on Friday morning in what will be the 20th day of testimony in the contempt hearing. It is also supposed to be the final day of testimony.

Closing arguments are scheduled for Nov. 20. After Snow determines what remedies should be imposed on the sheriff’s office for civil contempt, he will decide whether to refer the matter to a criminal prosecutor to pursue criminal contempt charges.