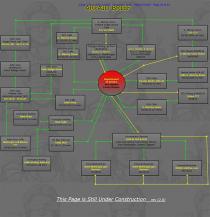 Documents like this one apparently produced by Dennis Montgomery alleging a conspiracy involving Judge Murray Snow were circulated in a 2014 meeting the sheriff attended, according to witness accounts in depositions.

Court testimony on Friday in the contempt of court case against Maricopa County Sheriff Joe Arpaio revealed the sheriff’s office improperly used federal drug interdiction funds to pay the confidential informant who apparently tried to link the judge in the case in a conspiracy with the U.S. Department of Justice.

Sheridan is also facing contempt of court, and is the first witness to testify in this round of hearings that began Thursday.
out it during the first round of contempt hearings.

In April, Arpaio confirmed he had hired Montgomery after U.S. District Court Judge Murray Snow directly asked him about it in the first round of contempt hearings.

Since then, the sheriff’s office had to turn over documents to the court related to Montgomery’s investigation, known as the “Seattle investigation.” Those documents include timelines and flowcharts Montgomery apparently made that link Snow, the U.S. Department of Justice and a law firm representing plaintiffs in an anti-Arpaio conspiracy.

Sheridan reiterated his testimony from April that the sheriff’s office did not hire Montgomery to investigate Snow, but rather because Montgomery said he had evidence of the CIA hacking into 150,000 Maricopa County residents’ bank accounts.

Sheridan said the sheriff’s office was well aware that Montgomery was a “questionable character” when they began working with him.

“All you have to do is Google him,” Sheridan said.

Several high profile media accounts have accused Montgomery of being a scam artist who conned the U.S. government into purchasing bogus counter-terrorism software. Montgomery has denied those allegations.

Sheridan said Montgomery had been a contractor with the CIA and NSA and grew concerned about overreach by those agencies concerning bank records.

“He made a copy every night before he went home of this data so some day he could become a whistleblower,” Sheridan said. But the chief deputy said Montgomery wasn’t able to get recognized as a whistleblower and was ignored when he went to the American Civil Liberties Union for help.

“The sheriff was the one who had the guts to take some time and spend the money to investigate this issue,” Sheridan testified.

He said if the sheriff’s office could prove Montgomery’s allegations were credible, it would be worth the $250,000 they spent on the investigation.

“Don’t forget the time period we were looking into this, Edward Snowden I believe was his name, was a huge story, he was making the same type of allegations,” Sheridan said.

Plaintiffs’ lawyer Cecillia Wang of the ACLU asked Sheridan if he had any concerns that Montgomery had illegally obtained data from federal agencies. Sheridan said the sheriff’s office was coordinating with the Arizona Attorney General’s Office because of those legal concerns. In October 2013 they brought Montgomery in for a “free talk” with that office, which allowed Montgomery to share information with immunity from prosecution.

Sheridan said only after the sheriff’s office had doubts about Montgomery’s credibility and threatened to stop working with him, did Montgomery produce information on his own about the U.S. Department of Justice contacting Snow. Sheridan said it was a strategy by Montgomery to entice the sheriff to keep paying him.

He guessed that Montgomery was likely thinking that since the sheriff was in Snow’s court, “Maybe this would be sexy for us to know this, thinking we will bite — and we don’t,” Sheridan said.

There is evidence a sheriff’s office posse member was trying to get overdue information from Montgomery as recently as April 20, 2015, the day before the last round of contempt hearings began.

In November 2014 the sheriff’s office had two outside experts examine the credibility of Montgomery’s work.

“We have found that he is a complete and total FRAUD,” one of the experts, Thomas Drake, wrote to an MCSO detective in an email that was presented in court.

“All he has done is provide you with readily available lists of email addresses, names, phone number of both individuals and businesses and a lot of framed up information, data and code. But no proof of whence they came and a whole lot of faked and made up documents and analysis,” Drake wrote.

Sheridan suggested he no longer believed Montgomery was credible but said some of Montgomery’s information about government tampering in bank accounts appeared to check out.

The sheriff’s office assigned a detective, a sergeant and a posse member to work with Montgomery on the so-called Seattle investigation. That included extended visits to Seattle by MCSO personnel.

Plaintiffs’ lawyers asked Sheridan about a conversation he had with Cpt. Steve Bailey, who apparently said he could not in good faith authorize more payments to Montgomery because he did not believe he was credible. Sheridan admitted this frustrated him and the sheriff at the time.

“In my opinion Captain Bailey was whining about the Montgomery investigation and this was something the sheriff and I wanted to continue,” Sheridan said.

According to evidence presented in court, the sheriff’s office apparently also tried to use federal drug interdiction grants from the High Intensity Drug Trafficking Area program to pay Montgomery. But the sheriff’s office ultimately had to return those grants since that was an improper use of those federal funds.

Plaintiffs’ lawyers also presented some insight into some of the Seattle investigation expenses. A 2014 email from a sergeant in the three-person team working with Montgomery requested to rent a four-bedroom house while the team spent 44 nights in Seattle. The sergeant wrote the fourth bedroom would be used to store materials from the investigation, presumably the hard drives Montgomery would turn over.

In another email the sergeant requested funds for computer equipment.

“It is estimated that the potential cost for such hardware over the duration of this investigation could exceed 50 thousand dollars,” the sergeant wrote.

Records released from the investigation suggest Montgomery ultimately gave the sheriff’s team 50 hard drives that they drove back to Arizona, but the drives were full of useless information. Last month the U.S. Department of Justice copied one of Montgomery’s drives to check it for classified content.