This year, the Maricopa Association of Governments estimated that more than 6,200 people will go without shelter on any given night. Those numbers are derived from the annual Point In Time Homeless Count held every January.

This year, volunteers found homeless individuals increasingly sleeping in plain sight. For instance, at the corner of 7th Street and Thomas, they came upon a crown of hair peeking out from under a tattered sleeping bag laid over a bed of rocks underneath a bus stop. Inside was 41-year-old Jessica Osornio.

"I've been homeless for about 20 years," she shared when offered a cup of hot coffee. "Maybe a little longer, on and off."

She is just one of thousands of chronically homeless people seen but left alone. 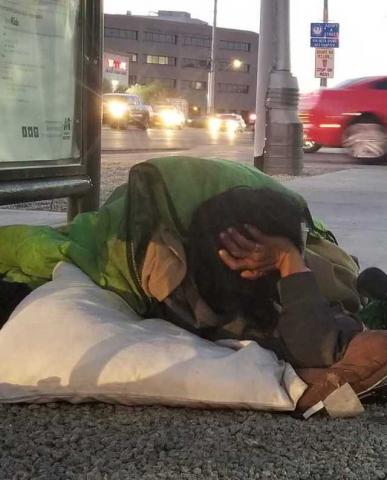 Haddi Meyer
A homeless woman sleeps on the corner of 7th Street and Thomas under a bus stop.

On that morning, temperatures were dropping into the low 40s as Kelly Taft with the Maricopa Association of Governments directed a team of volunteers to primarily observe and take notes.

"These outreach teams are not providing services today. If they do see people in critical situations they will call in for some help," said Taft.

Typically, that's where the mental health contractor Community Bridges comes in. Lauren Walker and her associate Anne Marie Johnston help the county's homeless find their way off the streets.

"Sometimes their needs are, you know, a shower, washing their clothes, getting connected to a halfway house shelter recovery home," Johnston said.

Lisa Glow is the CEO of CASS. She said they focus on providing shelter for newly evicted Arizonans, an increasing number of whom are elderly.

Recently, Glow said CASS received an 89-year-old woman, "which is outrageous," Glow said. "She came in with her walker."

Her son, she said, "had been stealing the woman's pension."

Glow said the number of seniors seeking shelter grew 6 percent last year, adding to the growing masses expected to fall through the cracks this year.

Those who eventually make it to CASS for services are entered into the Homeless Management Information System or HMIS.

Using a magnetic badge, clients can check in and out of various campuses and shelters around the county.

"So if the clients use the badge to go to the welcome center that day or to access meals at St. Vincent de Paul, then it would trigger in HMIS that they came for services that day," Johnston said, explaining the complex system for keeping track of individuals and their well being.

When a homeless client disappears for a few weeks, "we can see if they have they utilized any other service providers."

Glow walked through the coordinated entry point where a scanner beeps as homeless clients are first processed.

"Coordinated entry is the intake place where they assess and try to divert people from homelessness, and then they would assign them a bed at CASS," she said.

Lately, beds are hard to find at CASS, where nearly 400 people a month are routinely turned away. And the number is expected to grow.

"We don't have enough emergency shelter beds in our community for the fifth-largest city in the nation," Glow said, "We are pathetically under-sheltered."

As word spreads that there is no more room inside, people who were waiting move into the neighborhood parks, preserves and abandoned lots where Community Bridges caseworkers are soon sent out to follow up and offer help.

"Most people know who Community Bridges is. We've been around for so long," Johnston said. When caseworkers can convince the chronically homeless to get help, then they get the ball rolling.

"But if they refuse services," she said, "then it makes it difficult for us."

On Seventh Street and Thomas, Osornio declines their services.

"I stay away from everybody," she said scooting back down into her sleeping bag. As hard as they try, Walker said, they can't force her or anyone who refuse their assistance.

Sometimes they will open up, she said, when asked about other needs such as getting IDs. But when that doesn't work, the volunteers patiently do their best to figure out what they do want to talk about.