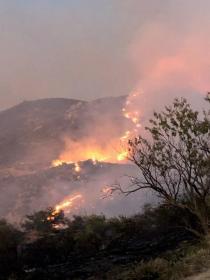 The Woodbury Fire has spread to over 1,400 acres and remains zero percent contained. The terrain of the area is hampering the efforts of fire crews.

The fire is burning a thick brush area a few miles northwest of Superior, and triple-digit temperatures are not conducive to firefighting. Carrie Templin with the U.S. Forest Service said it’s too risky right now to send in firefighters.

“We don’t wanna get any firefighters into the wilderness area and have them get injured or go down with heat-related injuries or illness and we can’t rapidly get them out of there," Templin said.

Templin said crews have prioritized a ranch structure in the area, but she did not say what efforts were being used to protect it.

“There are some ranch structures out in the vicinity ,and we’re working with the ranch owner and permittee to protect his assets," Templin said.