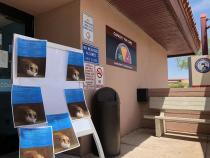 Grayson Schmidt/KJZZ
Maricopa County Animal Care and Control had to euthanize 19 dogs in just over a week due to a recent outbreak of distemper at its East Valley shelter.

Only days after Maricopa County Animal Care and Control announced a suspension on all activities bringing new dogs into the shelters, the county announced that 19 dogs have been euthanized in just over a week because of the distemper virus.

On Thursday, outside of the county’s East Valley shelter, Dr. Nancy Mayer, chief of shelter medicine for the county, also announced that the east location currently has seven confirmed cases of distemper, and the West Valley shelter has one.

“This virus is so contagious that we've got typically a three-day turnaround time on the test when they're submitted to the lab, and in that three days they’re a risk of further contamination within the shelter,” Mayer said.

According to the American Veterinary Medical Association, distemper is caused by a virus that attacks the respiratory, gastrointestinal and nervous systems of puppies and dogs.

Mayer said distemper is extremely contagious, and anyone whose pets are not up-to-date with vaccinations should get them vaccinated immediately. She also said pet owners should be on the lookout for symptoms like eye or nose discharge, tremors, teeth chattering, loss of appetite or lethargy.

She said that task is more difficult for shelter employees, who are tasked with distinguishing distemper from other non-fatal illnesses.

“The troubling thing about distemper is with those first signs that are shown it looks absolutely the same as the upper-respiratory disease that dogs typically come down within the shelter that isn't distemper virus,” Mayer said. “So there's no way in the early stages of the disease to know is it distemper or not, without testing.”

Earlier this week, Maricopa County Animal Care and Control announced that the shelters would not be accepting dog surrenders for a week, and that canine meet-and-greets and public dog walks would also be suspended for a month.

Despite the recent cases, Public Information Officer Jose Santiago wants to remind the community that distemper affects only dogs and that the shelter still had plenty of other animals and non-infected dogs that are looking for homes.

“We don't want people to be fearful of coming out to adopt an animal,” Santiago said. “We have plenty of healthy animals, and we're getting as good a grasp of this as we can. As a matter of fact, we need more people to come out and adopt because we need the space.”