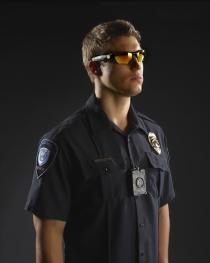 (Courtesy of TASER International)
The AXON Flex cameras can be worn on an officer's uniform, hat or sunglasses.

The Maricopa County Sheriff’s Office has ordered 700 body cameras for its deputies. A federal judge required these cameras, along with many other changes, after finding the sheriff’s office had racially profiled Latino motorists.

Originally the plan was to get vehicle-mounted cameras, but both the plaintiffs in the racial profiling suit and the sheriff’s office ultimately agreed to opt for cameras that would be worn by deputies. The sheriff’s office purchased body cameras and a data storage plan from TASER International, which is headquartered in Scottsdale.

Judge Murray Snow mandated the camera purchase in an October 2013 order, along with training for bias-free policing, new protocols for documenting traffic stops and other changes.

The cameras are anticipated to be delivered in the last week of February or the first week of March, said TASER spokesman Steve Tuttle. Snow is expected to provide guidance for how sheriff’s deputies must use them.

In recent months it has come to light that some deputies in the sheriff’s office had cameras they were using to record traffic stops, though that information was previously unknown to the court or the plaintiffs in the suit. The discovery was made after videos of traffic stops were discovered in Deputy Ramon "Charley" Armendariz’s garage. He was found dead in his home days alter, and his death was ruled a suicide.

The revelation indicated the sheriff’s office had violated discovery rules by failing to turn over video evidence to plaintiffs when they had requested it before the trial. Then in May, sheriff’s leaders failed to follow a plan outlined by the judge and the monitor to recover any existing video footage recorded by deputies in the Human Smuggling Unit.

Snow has grown increasingly frustrated with the sheriff’s office and cited these incidents for why he may pursue contempt of court charges against Sheriff Joe Arpaio and other leaders.