Pennies From Heaven: Arizona Mom Continues Legacy Of Son Who Died By Suicide 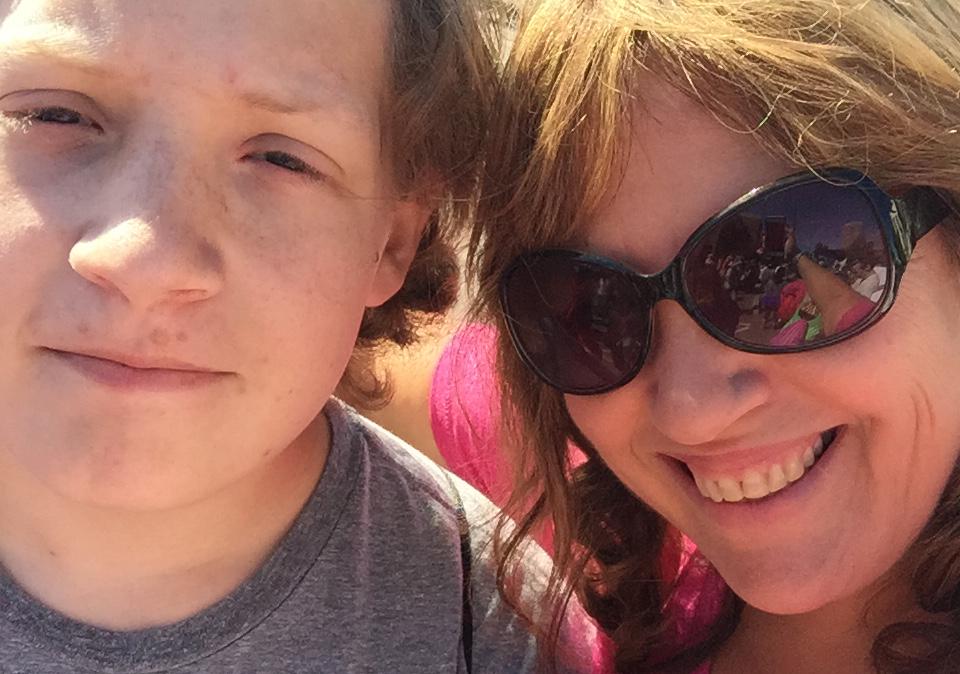 Suicide is being talked about now more than ever – in popular culture, in classrooms, at the dinner table. And yet the number of people taking their own lives across the United States continues to climb.

In Arizona, 1,304 individuals took their own lives in 2017, the most recent year for which numbers are available.

One of them was Zachary Sumner. He was 16.

This is a story of the people he left behind, particularly his mom, Francine.

Part I: 'Talk To The Kid In The Corner'

On a hot August night in 2017, Francine Sumner threw her son, Zachary, a birthday party at the north Phoenix cemetery where he’s buried. He would have been 17.

Two months earlier, he shot himself.

Experts say that for every suicide, there are 147 people left behind. Tonight, a dozen or so of those 147 — Zach’s older sister, his schoolmates, family friends and his mom — have gathered on the grass at Paradise Memorial Gardens with ice cream cake and rocks painted with messages of love. More than one rock has a semicolon.

In the months before he died, Zach and his mom sought treatment for his severe depression, which she says came on suddenly in late 2016. On several sheets of spiral bound notebook paper labeled “Timeline,” Francine has detailed the struggles leading up to Zach’s death, including:

March — Went back to school half day.

Within a month, Francine would found a group called Kid in the Corner — devoted to carrying on her son’s legacy. After Zach died, his older brother Jacob found his penny collection. Family members had holes drilled in the pennies from 2000, the year Zach was born. That led to the penny pledge, in which kids are asked to promise to be kind, to look out for that kid in the corner.

Francine Sumner
Zach and his dog, Lily, on vacation at Long Lake in Minnesota.

Francine steps into the hallway of her home and reaches in a closet for a large can of pennies. Slowly, she spills them out onto the coffee table.

“These are Zach’s pennies,” she said. New ones have been added in the last few months, mixing in with Zach’s collection.

In the eulogy Francine gave at her son’s funeral, she talked about how depressed Zach was when he returned home after his treatment, how no one at temple or school said anything. There were no messages on his phone.

“I believe that people just don’t know what to say,” Francine told those assembled for the funeral, “and I am begging you — talk to the kid in the corner.”

Zach stood up for people. When Francine went searching on her phone for his voice, she found a video of him taking the “ALS Ice Bucket Challenge.” He stands in the pool on a sunny day, nominating friends and gasping with laughter as ice water is poured over his head.

It’s not surprising that the video depicts Zach trying to do something good for someone else. At the cemetery, stories were told of Zach’s love of animals, his goofy side, his favorite traditions — like cinnamon rolls on birthday mornings. Someone brought along a paper lantern, and several people struggle to unwrap it, locate matches and read the instructions. Finally, the flame is lit, the lantern set loose into the night. Everyone cheers — until the lantern flies into a tree.

The small crowd grows quiet, waiting for the tree to burst into flames on this sweltering, dry night.


"I believe that people just don’t know what to say ... I am begging you — talk to the kid in the corner."
— Francine Sumner

Part II: Helping The Community With Zach's Name In Mind

When parents die, the child left behind is an orphan. When a spouse passes, there’s a widow, or a widower. But there is no word in the English language for a parent who survives a child.

Francine Sumner walks the halls of Temple Chai in north Phoenix on a recent Sunday morning, as the second anniversary of Zach’s death approaches. She pauses before a photo of Zach with his confirmation class, his red hair combed neatly. She winces.

Francine taught preschool at this synagogue for years. It’s where Zach was bar mitzvahed, and it’s where she gave her son’s eulogy after he took his life in June 2017.

Now she holds board meetings here for Kid in the Corner, the nonprofit she founded to limit the stigma of mental illness, particularly among teens.

This work has occupied Francine almost full time since the day Zach died.

Today, more than a dozen high schoolers have crowded into a pre-school classroom, standing around awkwardly, chatting and waiting for instructions. Francine stands to the side, watching.

“You know, it’s weird to see these kids because I haven’t really seen them in a while,” she says. “And it’s hard because the last time I saw them, Zach was alive. And they look so different and I know he would, too, and that’s really hard for me.”

The lanky teens line up at the low tables to assemble dozens of mishloach manot, a treat bag given out during Purim, a Jewish holiday celebrated with carnivals, parades and kindness to others. This year, a special batch is being made in honor of Zach.

“Growing up, Zach was always here helping out, doing things, and so we want to do things to help out our community with his name in mind,” said Erin Wynn, the director of youth and family programs at Temple Chai.

“Do you want to add anything thing?” she asked Francine.

The bags include snacks and candy, as well as a pin for Kid in the Corner. There’s also a card with contact information for a suicide hotline.

Francine estimates that the organization has reached more than 5,000 kids.

She’s the first to admit that she doesn’t have a background in suicide prevention or mental health care. There are a lot out there who do.

Michael Rhinehart is a crisis outreach administrator at EMPACT Suicide Prevention Center in Tempe. He ticks off the programs available, just through his small nonprofit agency, which has been around for more than 30 years.

“I’m not necessarily thinking that you shouldn’t start your own program and go out on your own, but maybe there’s already programs doing exactly what you’re looking for,” Rhinehart said.

“We have really great programs that are just aimed at helping individuals,” he said. “Our Signs of Suicide programs in the schools, our Survivors of Suicide … We also have the Loss Team that goes out, and we’re not the only one. The city, the community, Maricopa at large, is doing amazing things.”

Why are the numbers of people taking their lives going up, even as awareness and support increase?

Rhinehart pauses for a long time — then says he doesn’t know.

Back at Temple Chai, things are wrapping up for the morning.

They’ve run out of “Happy Purim” cards, so the project is over.

For Francine, it will never end.

But at the end of the day, she doesn’t want anyone else to be the mother of a dead kid, either.