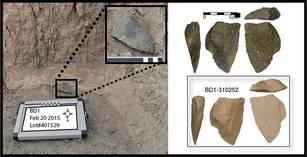 The development of flaked stone tools marked one of the most important milestones in human prehistory.

The research appeared in the journal PNAS.

Scientists found more than 300 stone Oldowan tools in the Afar region of Ethiopia, best known for its Australopithecus skeleton Lucy.

No human ancestral remains were found with the tools, however.

Oldowan tools get their name from Olduvai Gorge in northern Tanzania, where the Leakeys began finding the crude stone tools in the 1930s.

At 2.6 million years old, the new collection is younger than a 3.3-million-year-old assemblage of non-Oldowan tools found in Kenya. 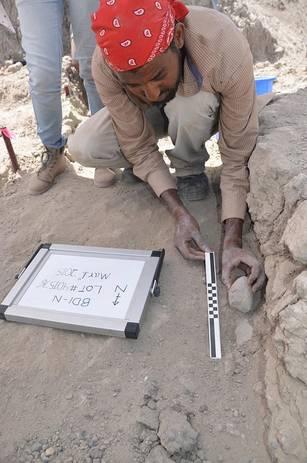 David R. Braun, License: CC-BY-SA 2.0
Blade Engda of the University of Poitiers lifts an artifact from 2.6 million year old sediment exposing an imprint of the artifact on the ancient surface below.

But co-author Chris Campisano of Arizona State University says the sheer number of artifacts sets this find apart as the first known example of systematic toolmaking.

"It is a geographic difference, but it's also a temporal difference and a definitive change, and/or difference, in how they were producing the stone tools," he said.

The find could mean that various members of the human ancestral tree invented tools multiple times in different areas.