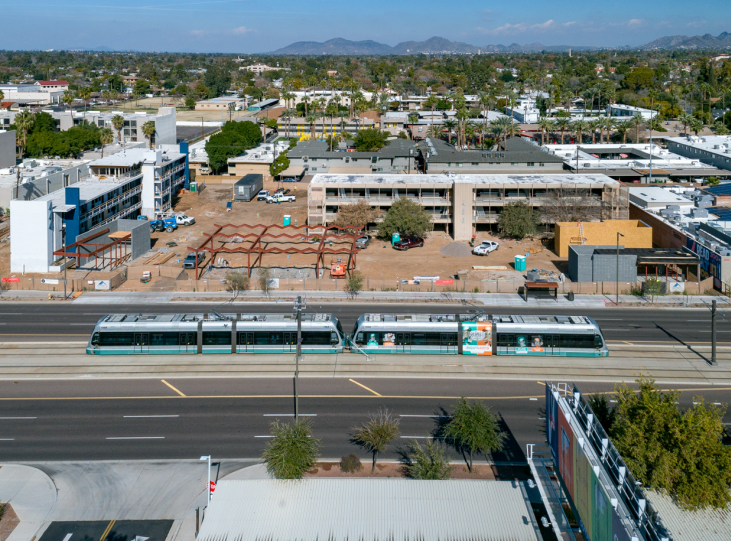 Venue Projects
An adaptive reuse project on Camelback Road and Fourth Avenue in Phoenix as it gets closer to completion.

LAUREN GILGER: Fans of mid-century modern buildings are getting excited about an adaptive reuse project on West Camelback Road as it gets closer to completion. KJZZ's Christina Estes is here to talk with us more about the project. Good morning Christina.

GILGER: OK,so this isn't just about the mid-century architecture it's also about the location right?

ESTES: Right. The location is nearly as much a story as the project itself. We're talking about two buildings on Camelback Road at Fourth Avenue along the light rail line. The key players are Venue Projects and Vintage Partners. They're the ones behind the development of Uptown Plaza at Camelback and Central Avenue. Some people who live and work west of Central Avenue, they're especially excited because they've been saying, 'Hey, what about us?' In the last five years or so they've seen a lot of restaurants and retail cluster along 16th Street and Seventh Street. And of course there's been intense development downtown along light rail. So they're hopeful this project will lead more developers to look west of Central Avenue.

GILGER: OK. So let's talk about the project underway so this is at Camelback and Fourth Avenue. The site has two buildings that were built in the early 1950s are they both staying?

ESTES: Yes, both will be used for a boutique hotel called Arrive. The buildings are referred to as 404 and 444 based on their addresses. During a forum hosted by Valley Partnership last month, Lorenzo Perez with Venue Projects said they want to get both buildings on the National Register of Historic Places. 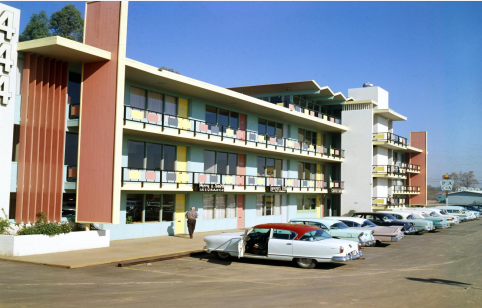 Venue Projects
The buildings at 404 and 444 W. Camelback Road in Phoenix will be converted into a boutique hotel.

LORENZO PEREZ: And their very unique buildings for Phoenix even though the only three storey buildings north of Camelback on the Camelback corridor that are mid-century office buildings, particularly the 444 building which is a form of architecture called Googie style which was usually reserved for banks and roadside architecture mostly restaurants.

ESTES: The Arrive hotel will have 79 rooms, most will have private balconies, and there will be a rooftop bar and a local coffee bar. The outdoor pool will be shaded so you can actually swim during the summer without getting scolded. The hotel will be next door to the Newton. That's another adaptive reuse project Perez and his partner worked on.

GILGER: To complete the hotel project, they need to buy a little land from the city as well right?

ESTES: Yeah, they bought remnant parcel the city acquired but never used for light rail. So in exchange, they committed to creating a public benefit. That means we should see shaded walkways and public art. Perez grew up in central Phoenix actually in the avenues just off Camelback and he calls these projects labors of love.

PEREZ: They require a lot of time. People are like 'god you're sure taking you out that project done' but if you really went through it I mean several times as media projects I constantly ask myself 'why do we do this?' But then I go to the projects and see how people engage with it when they're done and they're really special places. So it is worth it, it's important.

GILGER: So, what's most challenging when they take on these adaptive reuse projects?

ESTES: Well, it sounds like a little bit of everything. You're talking about older buildings that have to be upgraded to meet current codes while also preserving their character. Perez says they try to budget for the unknown but it just never seems like it's enough. There is a shortage of construction workers and materials costs more so that's another challenge. And there's another aspect that requires a lot of time: working with the community. Perez says neighbors have valid concerns especially when it comes to parking and traffic and they try to do a lot of outreach and try to be sensitive to how their projects impact neighborhoods.

GILGER: Perez and his business partner launched venue projects in 2008. They've no doubt seen the market change in the in the time in between. Does anything in particular stand out? 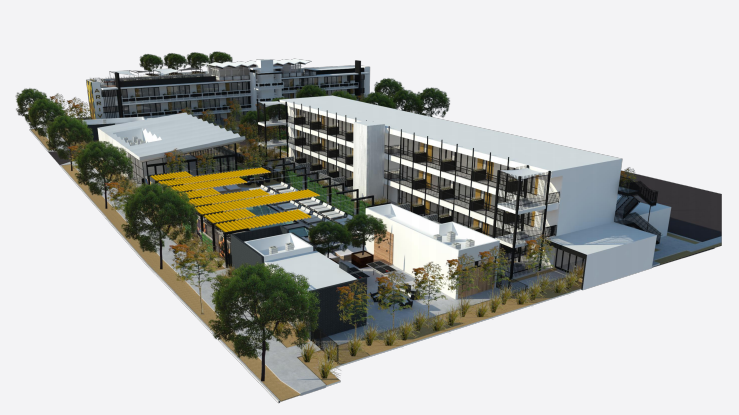 Venue Projects
A rendering of the Arrive project.

ESTES: Well, one big change is acceptance. When Perez and Jon Kitchell started working on adaptive reuse projects it was more of a novelty not a lot of people, especially during the recession, saying hey let's spend a lot of money to turn this old building into something cool. Perez used the Newton project as an example of how the industry has changed. They took the former Beefeaters restaurant, saved the fireplaces, some of the original wood and other features and they built a space that includes Southern Rail restaurant, Changing Hands Bookstore and the Southwest Gardener. But six years ago when venue projects was shopping around for loans, the banks were comparing construction costs for the Newton project to something like a dollar store which they found insulting.

PEREZ: Nowadays, I love seeing so many people doing reuse stuff there is actually a market that they can measure and monitor and now we're getting bumps up for being differentiated instead of penalized.

ESTES: And there's another payoff when it comes to tenants. He says people want to rent their spaces because they consider them special.

GILGER: So, when will the Arrive hotel open?

ESTES: Well, the plan is this fall.

GILGER: OK. That's KJZZ's Christina Estes keeping us up to date on the adaptive reuse project happening at Camelback Road and Fourth Avenue in Phoenix and I know I've seen it they're so glad to know. Thanks, Christina, have a good one.