Rescuers Prepare For Arizona Monsoon Season — But The Public Can Help, Too 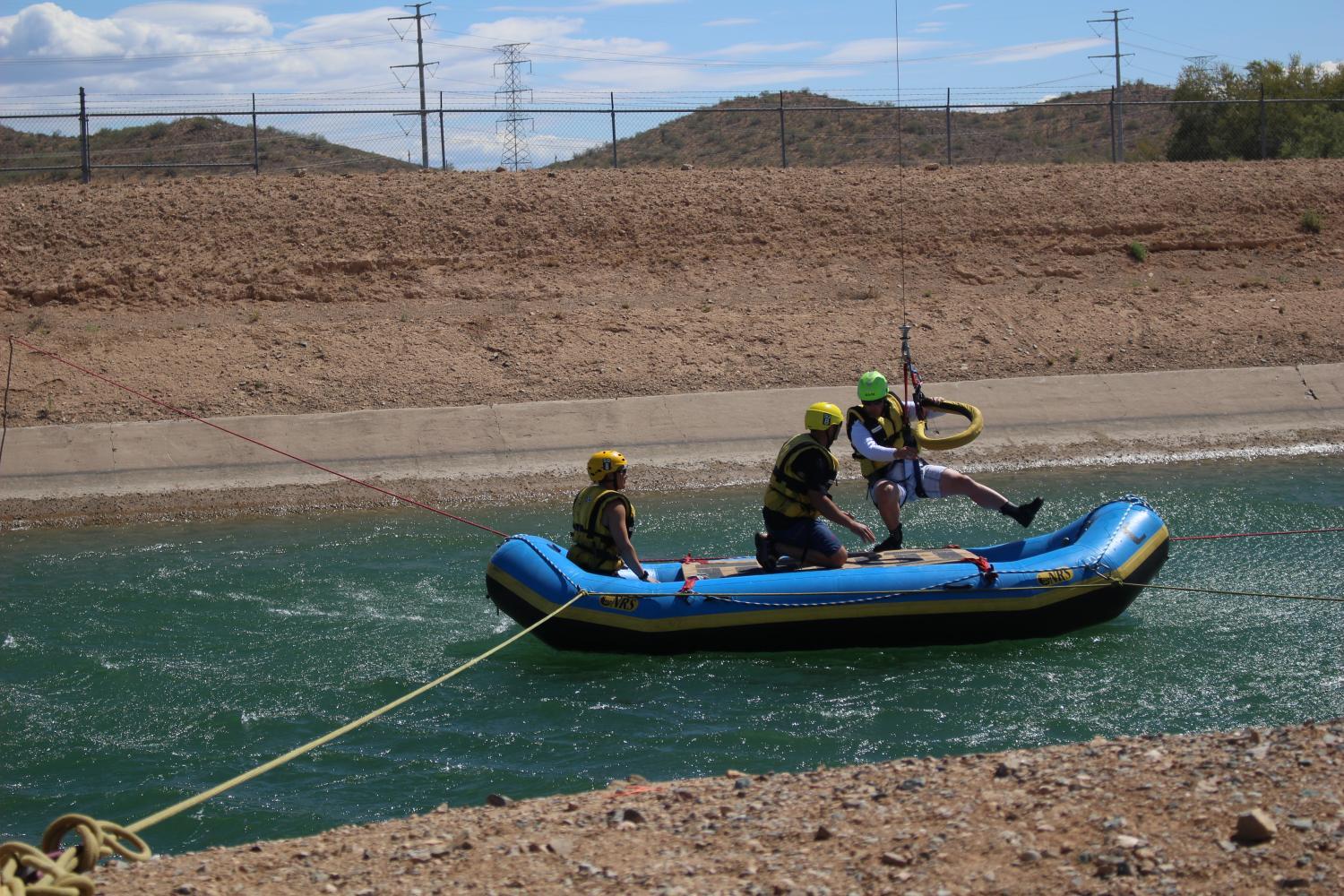 Monsoon season is almost here. The National Weather Service says it starts June 15 and lasts through Sept. 30. And with storms comes a risk of getting stuck in a flash flood, which means Arizona rescuers may have to spring into action at a moment’s notice.

To prepare for monsoon season, rescue crews at fire departments around the Valley held a series of air lift trainings at the Central Arizona Project (CAP) canal in north Phoenix this spring. The aim was to help these workers remain “storm ready,” although many of them regularly perform air rescues of imperiled hikers on local mountains.

A training last week started off simply, with a refresher on helicopter safety.

“Always have your head on swivel,” said Phoenix Fire Department Captain Troy Caskey. “Remember: there’s no quick or fast movements around the helicopter.”

Caskey then demonstrated how to use the cinch collar — the yellow ring a technician uses to grip victims so the helicopter’s hoist can lift them. The plan for the day was to fly technicians over the canal one by one, dropping each one down to a wood landing laid on top of a raft secured in the canal. The landing simulated the hood of a car.

“You’ll always be connected,” Caskey told the air rescue technicians, or ARTs. “We’ll give you some slack. You guys capture your patient. Give good, clear hand signals.”

Hand signals told the flight crew when the technician and victim were ready to be flown to higher ground. 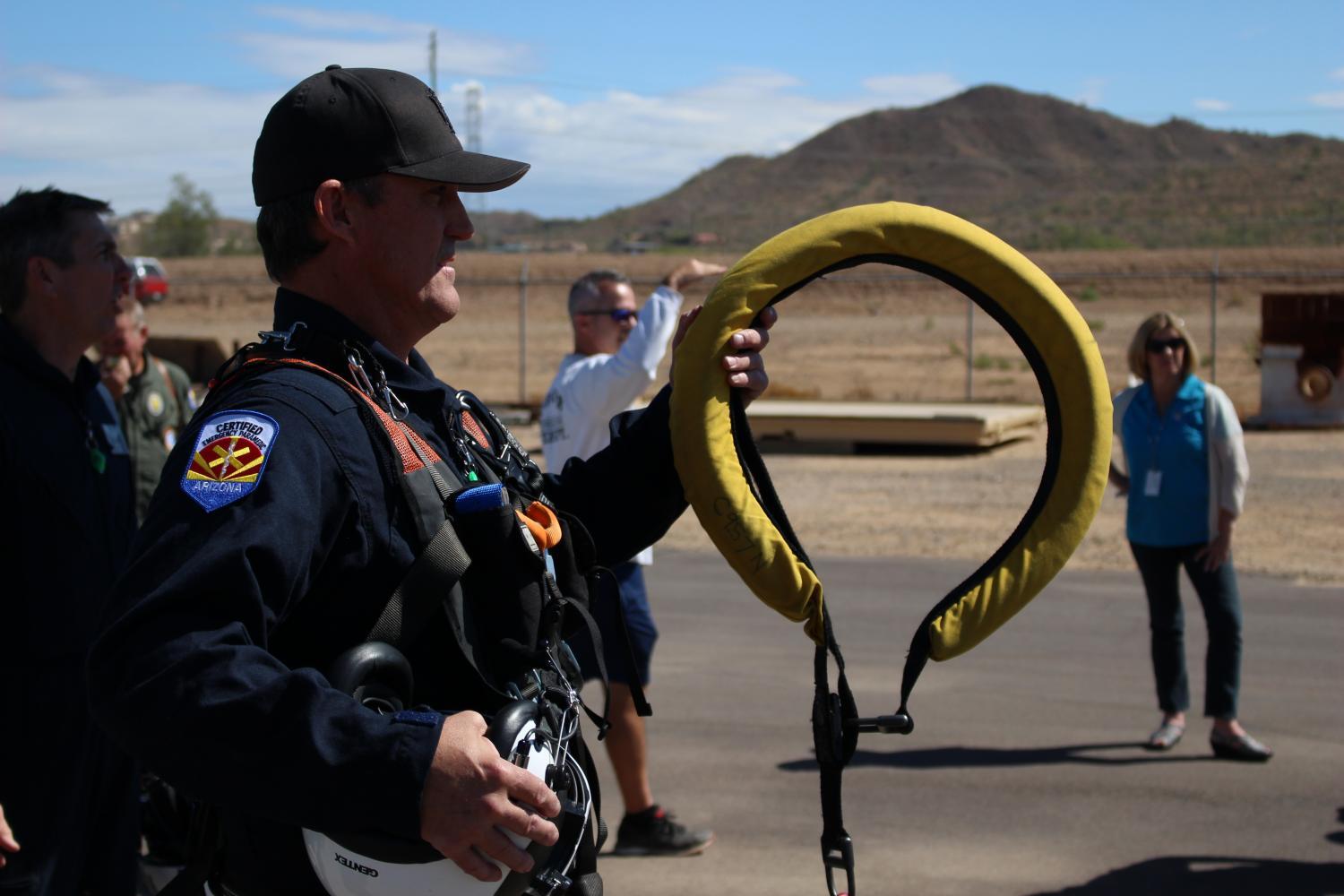 Bret Jaspers/KJZZ
Troy Caskey demonstrates how to use the cinch collar at the outset of the monsoon air rescue training.

The canal, acting as a stand-in for monsoon flood waters, is not just a calm body of water, according to CAP spokesperson DeEtte Person.

“It’s moving about 2 to 3 miles an hour,” she said. “And that can be dangerous and even deadly and that’s one of the reasons we fence the CAP canal.”

At the training site, the water spanned 72 feet across and reached 16 feet deep. CAP relies on local public safety agencies for emergency response along the canal. Cumulatively, the canal has seen just a few deaths over the last five years.

John Adcock with Scottsdale Fire said there are a lot of variables to deal with when you save someone from a car trapped in deep water.

"It’s just slippery on the car, there’s a lot of things going on,” Adcock said. “You have the worry of the car slipping or moving in the water if the water’s high enough. Getting them out of the car, trying to get them in a helmet or vest, whatever you can get them into right before you lift them off the car.”

The emotional work in that kind of emergency situation can also be difficult, he said. “Especially when you have a bunch of kids in a car or a lot of people in the car and you’re rushing [because] you know the water’s rising.”

It did not seem easy for the descending rescuers to make a clean landing on the raft. Even in a training situation, it is clear time is short for the helicopter and ART to do their work.

“It’s important to get out here and do the training [because] you get reminded, yup, I missed a couple things and obviously, I didn’t get the cinch collar high enough,” said Phoenix firefighter Armando Navarro, one of the first to practice. 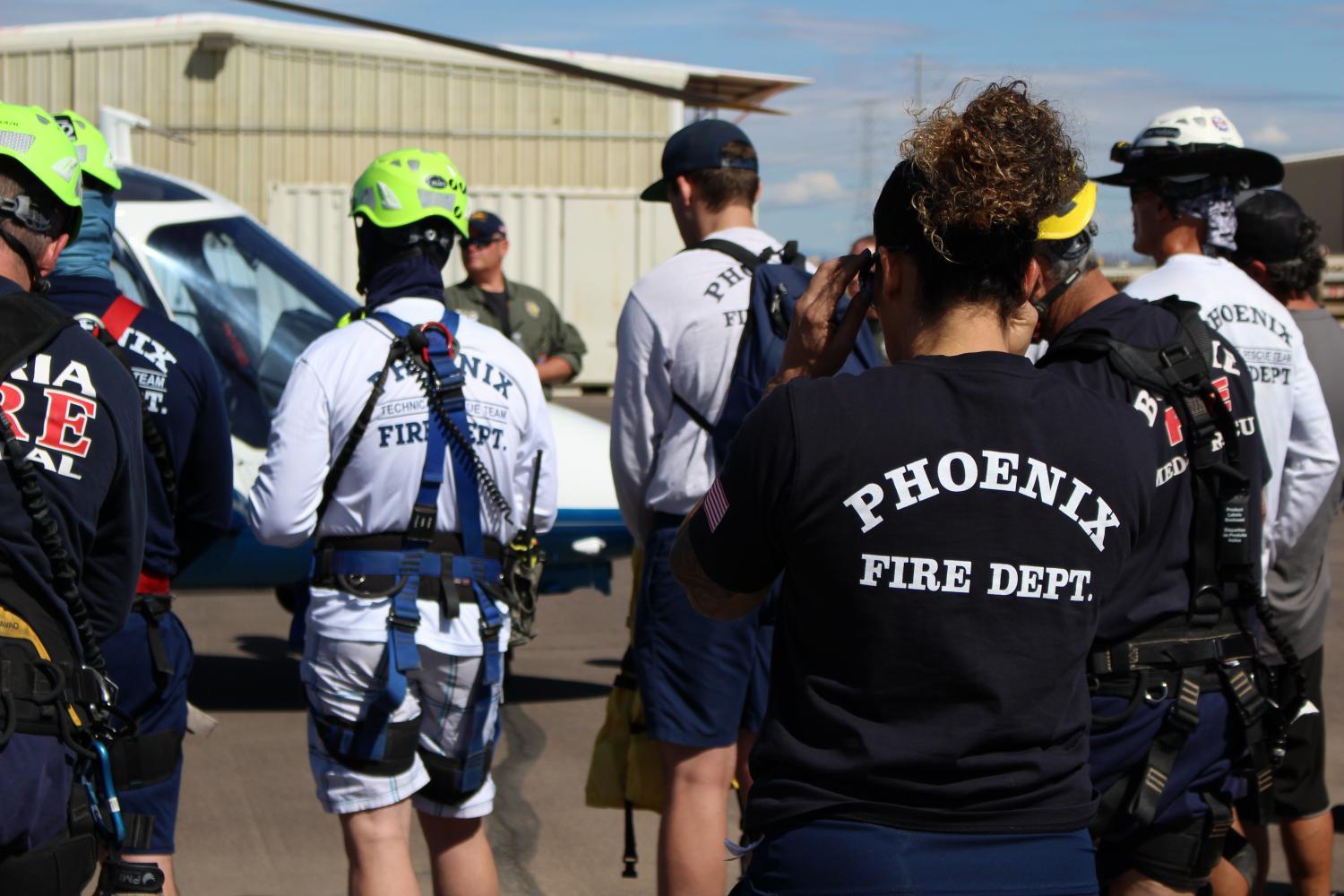 Valley-wide, about eight air rescue technicians or ARTs are on hand at any given time to drop down from a helicopter to rescue people.

In a rescue a couple of winters ago, Bobby Dubnow, a captain with Phoenix Fire, used these exact skills in the Town of Cave Creek. His team pulled an elderly man and his son to safety after their vehicle had washed off the road.

“[It was a] little challenging to get the first gentleman out. Again, he was a little bit elderly. Not very willing. And [it] just took some choreography to kinda get him outta the window and onto the top of the vehicle,” Dubnow recalled.

Dubnow said they don’t do a lot of these rescues — it’s far more common to use a boat to rescue people from a stranded vehicle. But when they do, it’s not uncommon to perform both a physical task and a persuasive one.

“In addition to concentrating on the skill set that we’re trying to perform, we also have to, you know, be motivators and get them to cooperate with us,” he said.

Moving into monsoon season, there’s something we can all do to be more cooperative: If you’re facing a flooded wash or road, just don’t even try to drive through it. 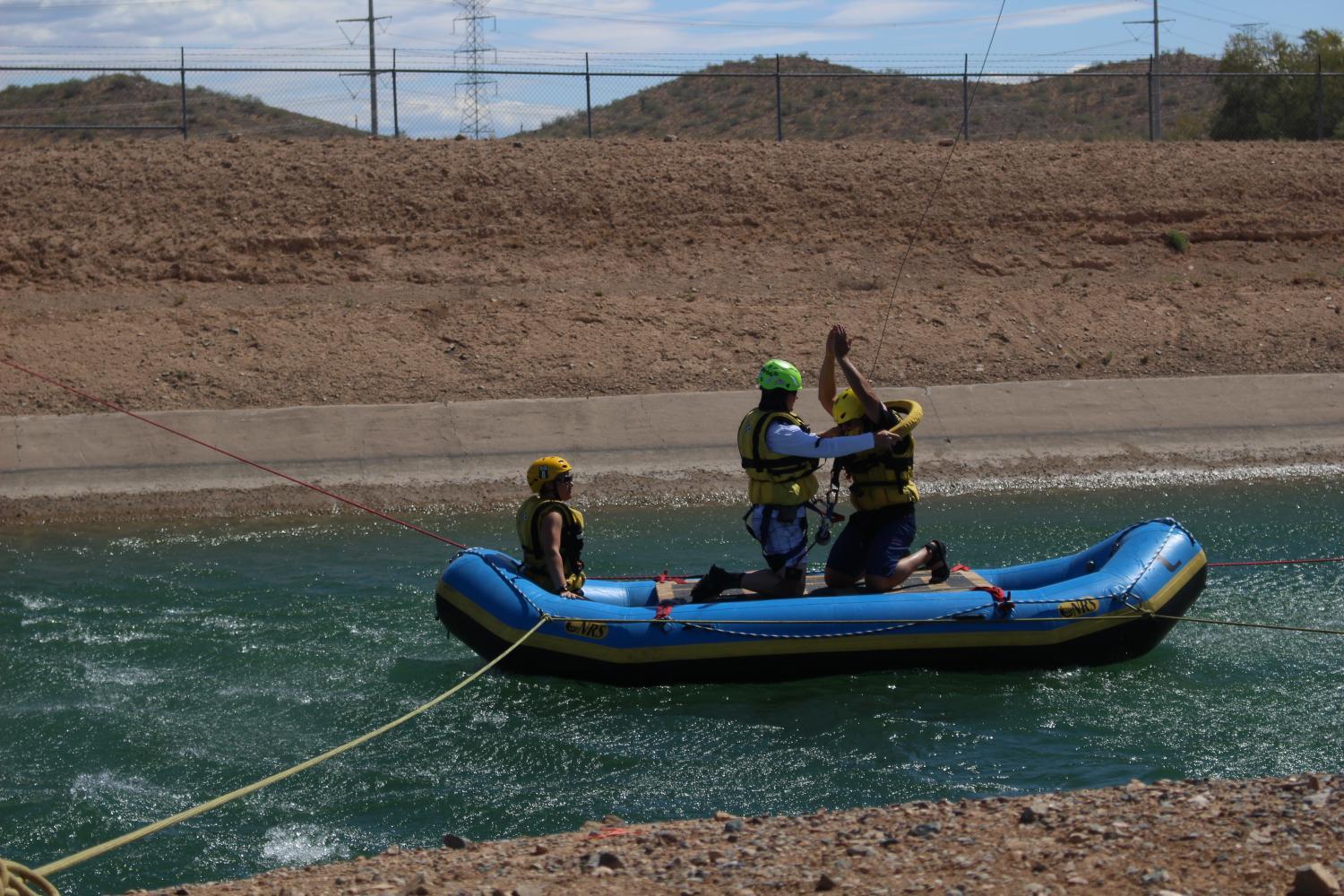 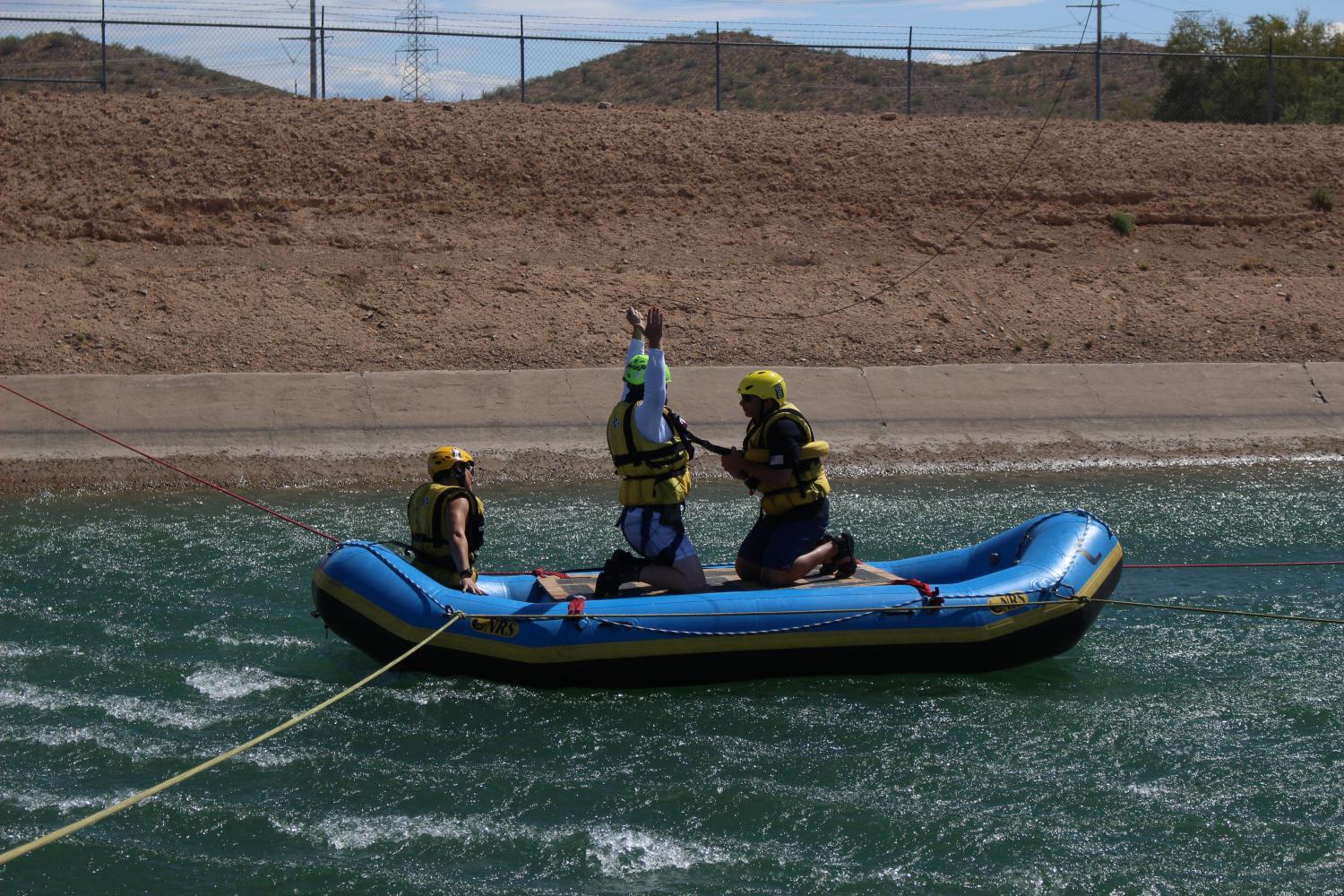 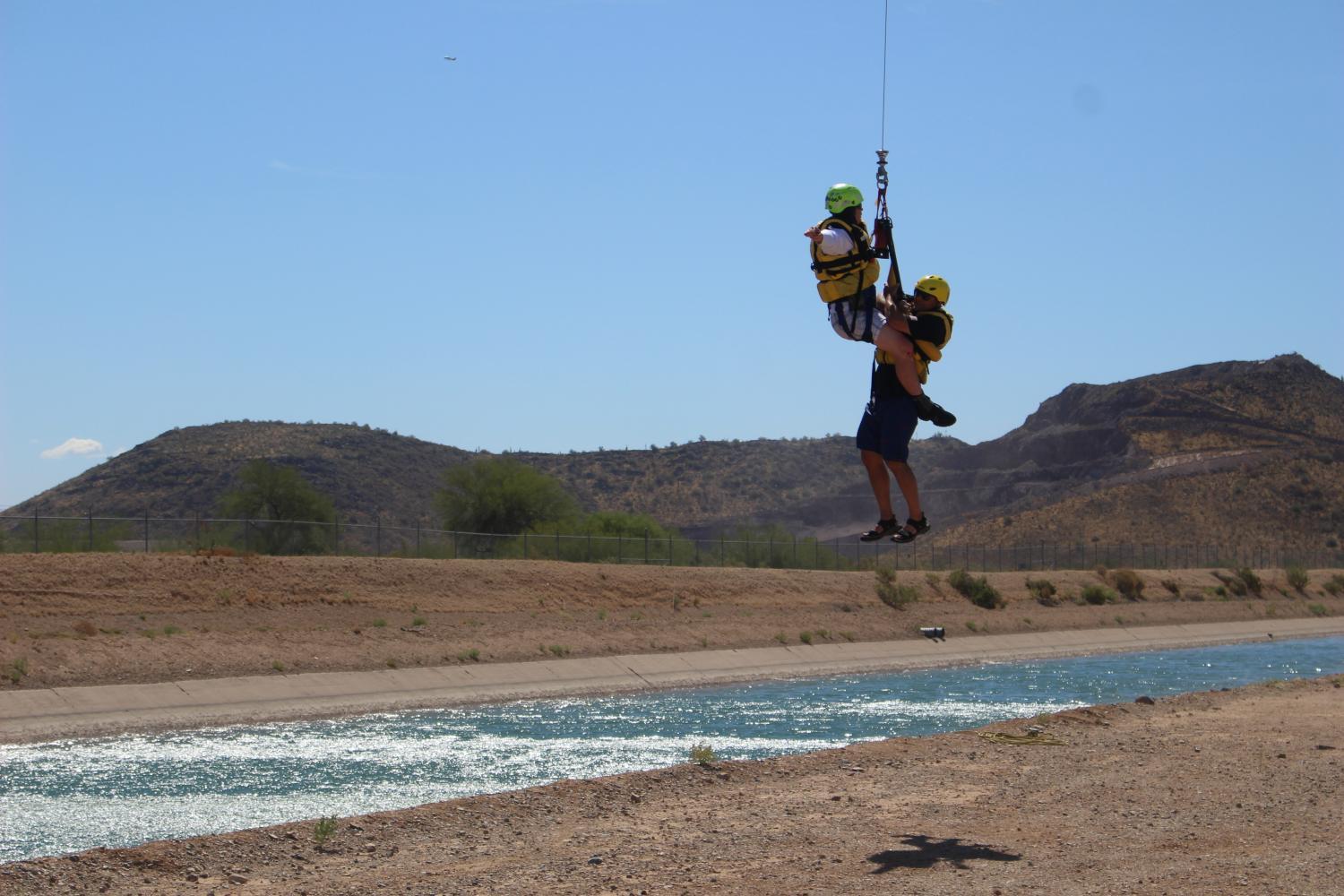 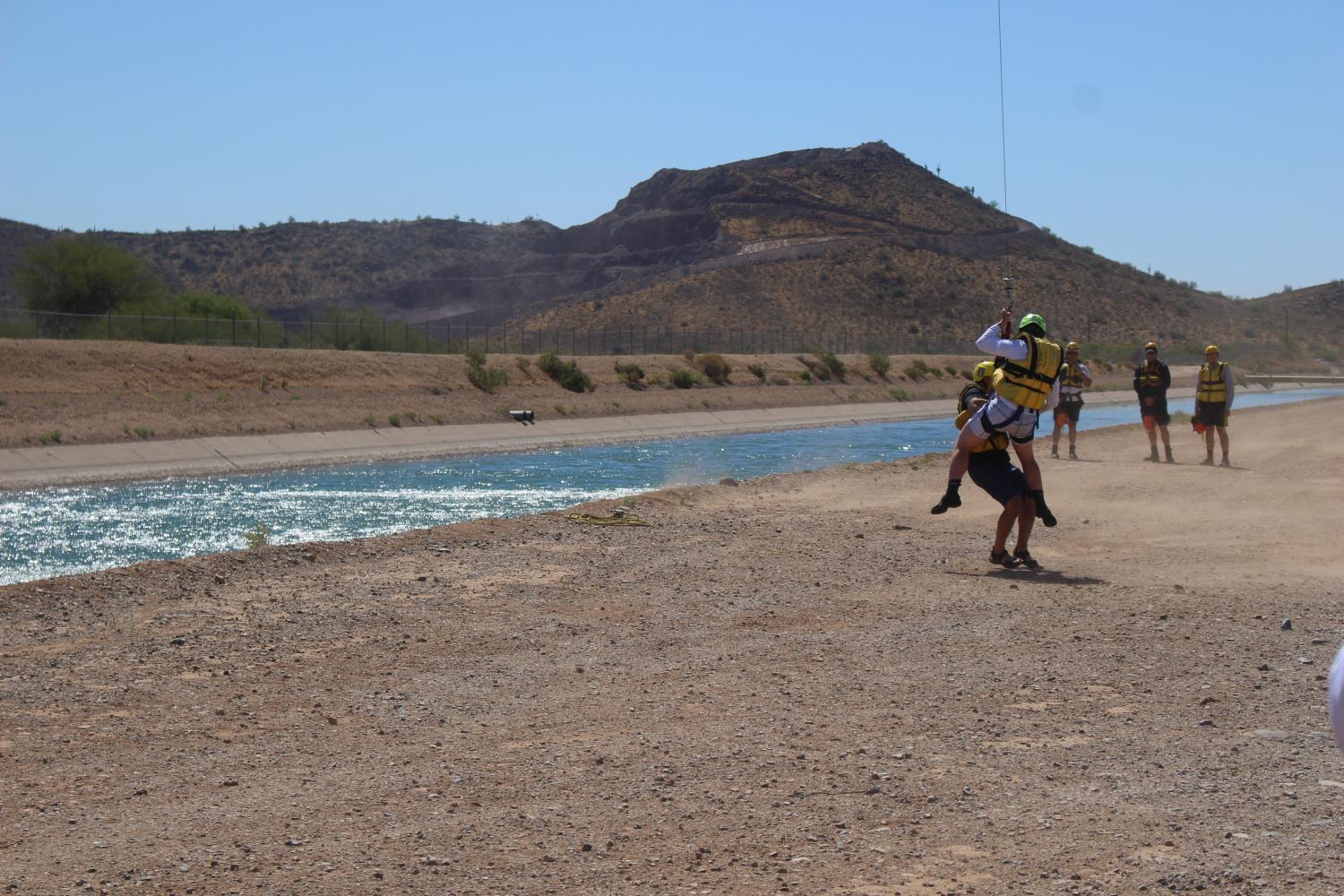 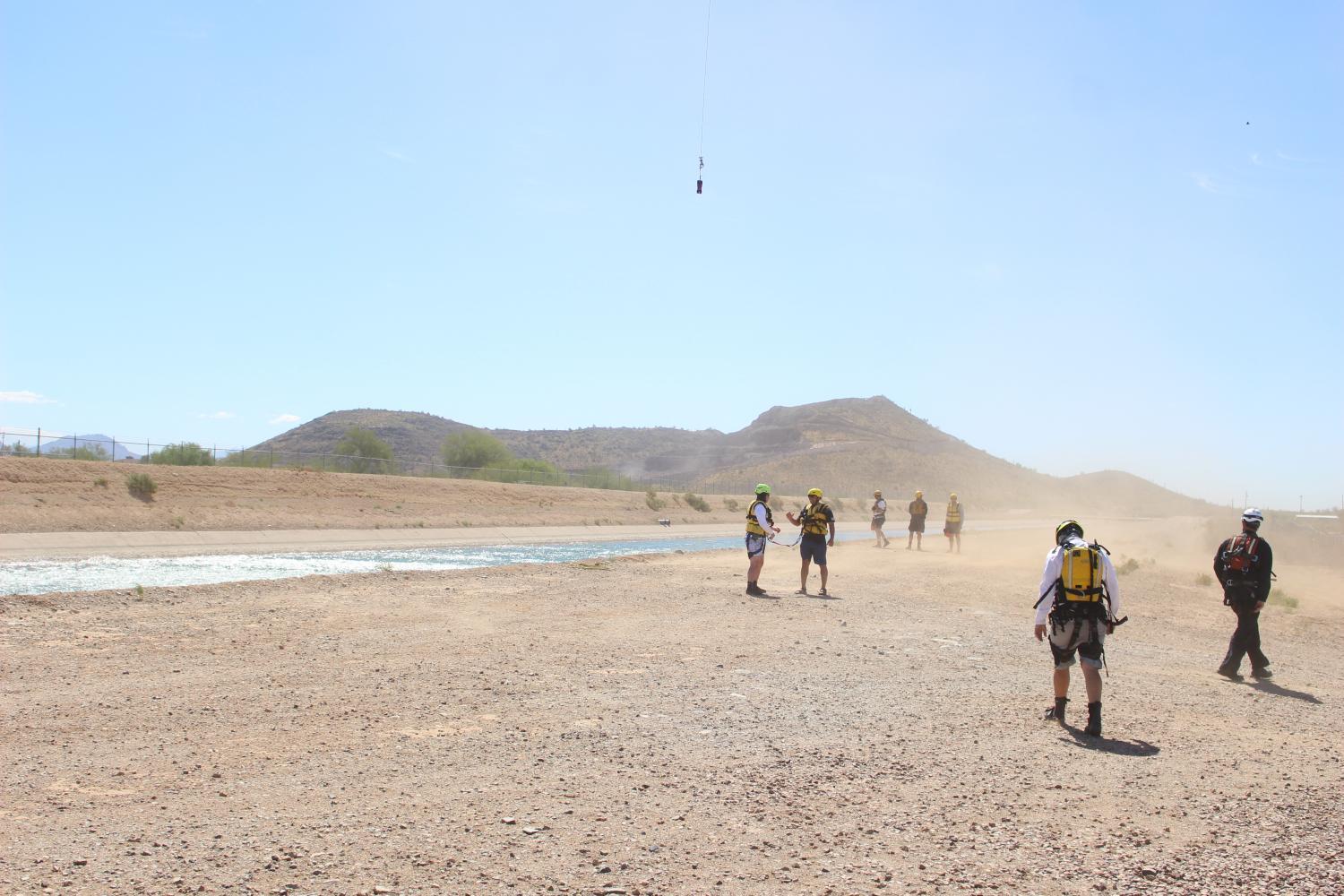 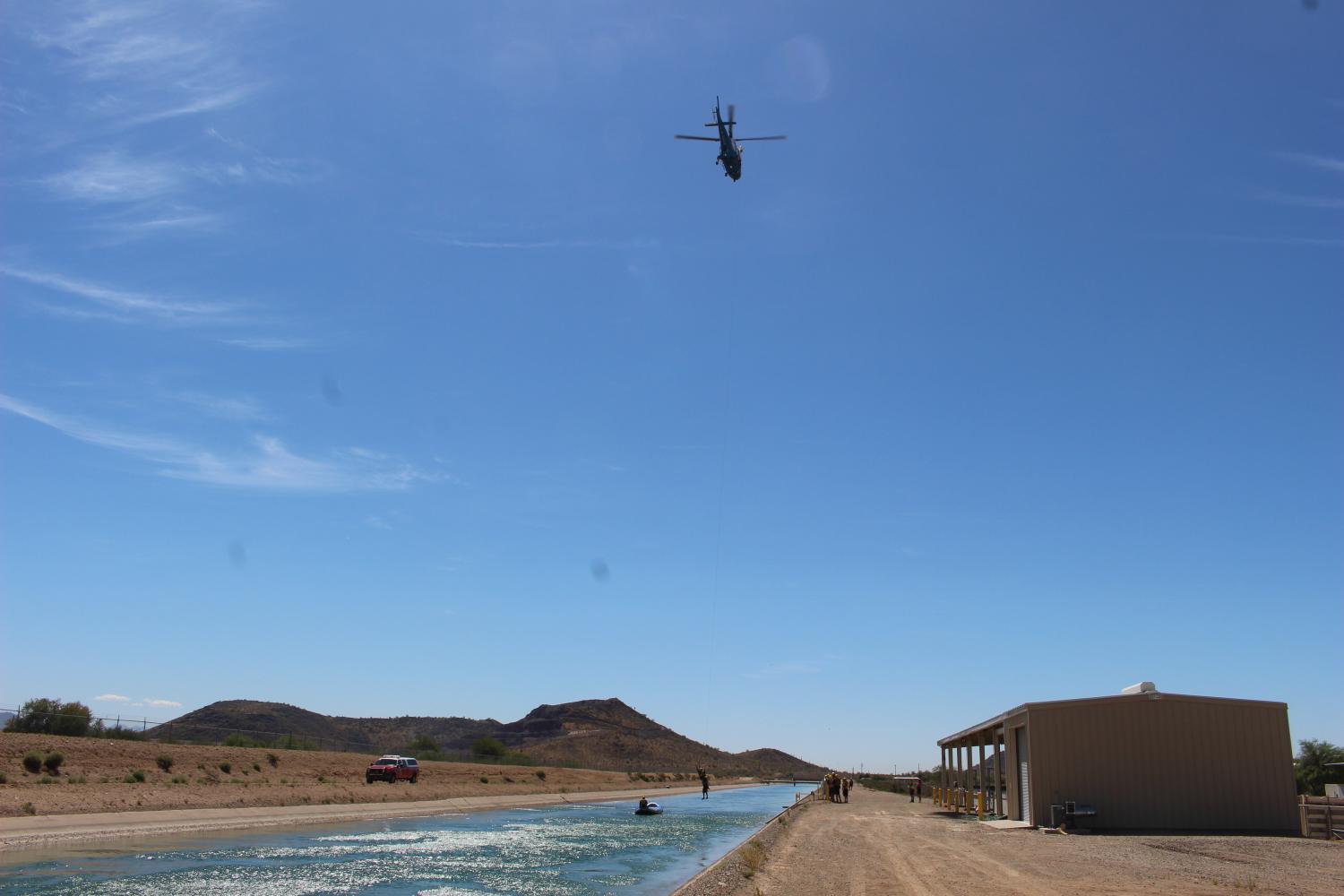 Bret Jaspers/KJZZ
A helicopter overhead during a training.