Q&AZ: Are The '5 Cs Of Arizona' Still Relevant? 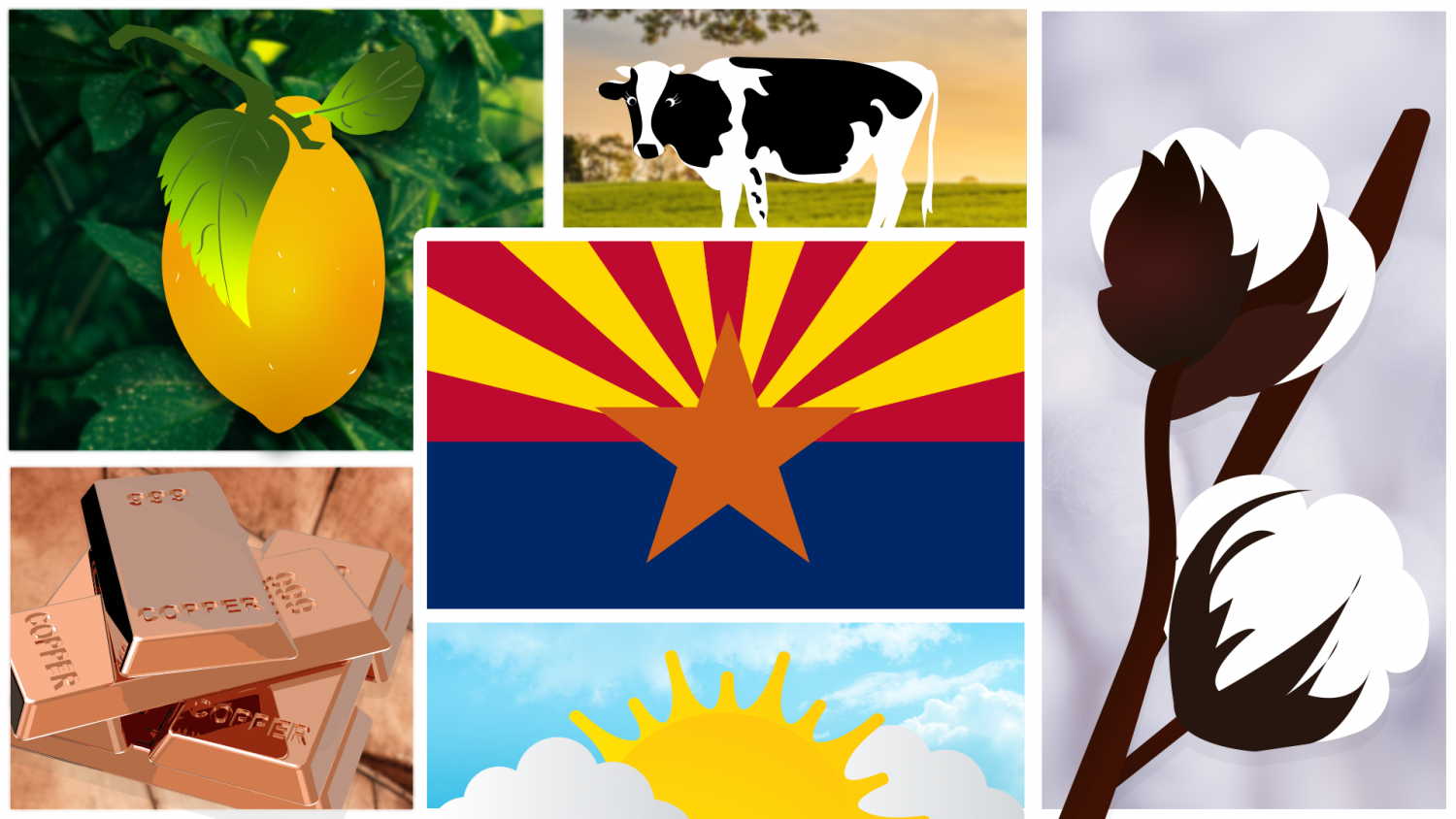 If you attended elementary school in Arizona, you probably learned about the “5 Cs of Arizona.” Copper, cattle, cotton, citrus and the climate were considered the building blocks of our state’s early economy and are all featured on the official state seal.

Perhaps you heard about the 5 Cs for the first time during the Great Legislative Lemonade Debate of 2019. The state, or at least the state’s lawmakers, were embroiled in heated debate after a Gilbert teenager proposed lemonade should be the official state drink. His reasoning was citrus, one the five Cs, was not represented in the growing list of state insignia.

Arizona is a fairly young state, but it’s still seen a lot of changes in the 100 plus years since the state seal was finalized and a copper dome was erected over the state Capitol. One KJZZ listener wanted to know: just how relevant are these 5 Cs to Arizonans today?

Arizona is probably best known on the international stage for its sunny climate. The high temperatures allow our iconic saguaro cacti to thrive while baffling summer visitors.

That weather drew white settlers to the Valley before Arizona was even a state because doctors thought those suffering from tuberculosis or asthma could benefit from the dry, warm air.

Promoters for the city of Phoenix designed posters that declared their city as the place where “Winter Never Comes!”

“Which sounds like a really boring episode of Game of Thrones, but back in the day, it was Phoenix's advertisement to get folks to come,” joked Scott Dunn, with the state Office of Tourism.

Tourists brought about $22 billion to the state in 2017, and Dunn said all that money doesn’t come from reminding the world about sunny skies alone.

“There are a lot of other warm-weather destinations we have to compete with,” he said.

The strategy now is to showcase the many different climates in Arizona.

“The Gulf of California — you’re basically sea level,” he said. “Then you go up to the San Francisco Peaks and that’s a journey of 13 thousand feet in one state.”

As tourists journey across these varied climates, they’re likely to encounter another C: cattle.

Cows can be found in all 15 counties of Arizona, and Bas Aja, vice president of the Arizona Cattle Feeders Association say they play an active role in the state identity.

“Arizona loves its open spaces and our production provides those open spaces,” he said. “That’s how those lands can be maintained and sustained.”

In the 1900s, the cattle industry accounted for 40 to 50 percent of the entire state economy.

Recent data show that number is now closer to 5 percent, but not because the industry has shrunk. According to the Arizona Cattle Feeders Association dollars-wise the yield has remained pretty level with inflation.

“It’s just that Arizona’s economy had grown in different ways with other industries,” Aja said. “Which is a good thing!”

“With urban expansion you tend to see a lot of dairy production,” he said.

But that is one factor that has lead to less citrus and cotton production, two other Cs.

“There's been a decline in cotton acreage but an increase in alfalfa acreage to feed the cows,” Frizvold said.

And the decline has been steep. In the late 1980s Arizona was growing more than 60 percent of the world’s Pima cotton. That’s dropped to less than 2 percent in recent years.

There’s a reason Arizona was once a leader in Pima cotton production: it was developed outside of Tempe around the turn of the century.

Around the same time federal engineers were experimenting with different strains of cotton, a farmer named W. J. Murphy planted the state’s first commercial orange grove near the base of Camelback Mountain.

Decades later, Arizona still had thousands of acres of citrus groves, which supplied oranges, lemons, grapefruits and tangerines to the country.

Some have suggested replacing citrus and cotton with a different C: crops, to reflect that in 2017 the agriculture industry added $23.3 billion to the state economy.

Other suggestions include cactus or canyon. While neither is a major driver of the state’s economy the way the original 5 Cs were, they are intrinsically tied to Arizona’s brand.

The Arizona technology industry is growing and now accounting for about 10 percent of the overall economy. About 45,000 of the 241,000 tech jobs in Arizona are tech manufacturing, which is intrinsically linked to the fifth C: copper.

Arizona is the number one copper-producing state, supplying 66 percent of the nation’s copper from just 10 major mines.

The miner leaning on his pickaxe on the state seal pays homage to the thousands of people who founded mining towns across the state.

Once the largest industry, the number of people employed by mining companies has decreased in recent years, thought it still brought in $5.7 billion dollars in 2017.

“We mine ten times more copper today than in the 1950s due to increasing demand,” said Steve Trussell, executive director of the Arizona Mining Association. “It’s a key metal necessary for renewable-energy initiatives and technological advancements.”

Looking at the 5 Cs through 2019’s eyes, copper, cattle and the climate are still very relevant to the economy while citrus and cotton production is steadily decreasing.

Last data from the U.S Department of Labor show jobs in trade, transportation and utilities are strong, and construction, the manufacturing industry, education and health services sectors continue to grow.

EDITOR'S NOTE: The story has been updated to correct the number of Arizona counties.