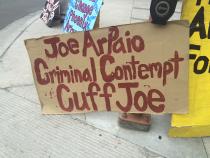 Any day now a federal judge is expected to order an April hearing to decide whether Maricopa County Sheriff Joe Arpaio should be held in contempt for violating court orders.

On Friday, lawyers for the sheriff asked the judge for the chance for a settlement meeting. They requested the soonest possible date, no later than Feb. 16.

On Monday plaintiffs responded saying they would sit down with the sheriff but were skeptical if they could reach an agreement.

Plaintiffs urged U.S. District Court Judge Murray Snow to proceed in the meantime with his plan of setting a four-day hearing for civil contempt proceedings in April.

Snow has presided over the seven-year racial profiling case against the Maricopa County Sheriff's Office. The case began when a group of Latinos in Maricopa County sued Arpaio over his immigration enforcement tactics, saying they targeted Latinos unfairly.

In 2013, Snow determined MCSO's policies did racially profile Latinos. Snow then ordered sweeping changes at the department, and appointed a monitor to oversee compliance.

In recent months Snow has grown concerned that the sheriff's office has violated several court orders. One of the chief issues is the sheriff’s office seemingly failed to notify deputies of Snow’s 2011 pre-trial order to stop detaining immigrants for being in the country illegally. That means the office may have essentially ignored that court order for several months.

During a phone conference in January, Snow tentatively set aside four days in April to hold a possible civil hearing to find out if Arpaio and his commanders should be found in contempt of court and be forced to pay fines. At that April hearing, sheriff’s officers would be forced to testify.

But it seems Arpaio may want to avoid a public hearing of that kind, which is why his lawyers are now pursuing the opportunity to reach a settlement.

The motion asking for a settlement conference was filed one day after Arpaio sent an email to supporters announcing his plans to run for re-election in 2016.

In the email, the 82-year-old sheriff said the 2016 race could be his toughest campaign yet.

"As 'America's Toughest Sheriff,' I've been pushing back against radical leftist, law enforcement-bashing demagogues for years and now is their opportunity to take me down," he wrote.

The message said Arpaio needed financial support since he is up against "Barack Obama's political machine, Hollywood leftists and their millions as well as a hostile local and national media."

Arpaio included a bullet-point list of obstacles he is facing, including, "Rampant, UNFOUNDED charges of racism and racial profiling in my office." He used the same line in a fundraising letter last March for a potential run for governor.

But there is no question that Snow ruled in 2013 that the Maricopa County Sheriff’s Office did racially profile Latinos. While the sheriff's office has appealed parts of Snow’s order, it did not appeal the court's finding of racial profiling during saturation patrols. The sheriff's office is asking the 9th U.S. Circuit Court of Appeals to review whether the court's finding was too broad when it concluded there was a pattern and practice of discriminating against Latinos in MCSO's regular patrols.

That particular line of the email could potentially be viewed by the judge as another act of defiance by Arpaio. The judge has reprimanded Arpaio and other MCSO leaders over past statements they made that undermined and mischaracterized his rulings, though Snow has also acknowledged the sheriff's right to speak his mind as an elected public official.

Lawyers for the plaintiffs highlighted the line in their reply motion on Monday.

“At this point to say allegations of racial profiling are unfounded, are cause for concern for plaintiffs and the community,” said Dan Pochoda of the ACLU of Arizona in an interview. “It gives us pause when contemplating the possibility of productive settlement discussions.”

Pochoda says his side will only agree to a settlement in the contempt proceedings if the sheriff agrees to an admission of wrongdoing and appropriate damages. Lawyers for the sheriff’s office did not respond to a request for comment.

Snow has yet to rule on whether the parties can proceed with settlement discussions.

In addition to the possible civil contempt hearing in April, Snow has said he may appoint a federal prosecutor to pursue criminal contempt charges against Arpaio and other leaders. The punishment for criminal contempt could be fines or incarceration.

EDITOR'S NOTE: This story has been updated with more information about Sheriff Joe Arpaio's appeal of Judge Murray Snow's ruling in the racial profiling case.