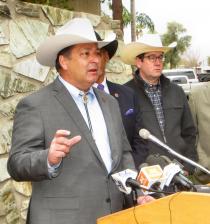 Irrigation districts in Pinal County and elsewhere got a $20 million loan as part of the state budget passed this week.

Farmers in Central Arizona wanted the money so they could start building wells and other groundwater infrastructure as they wait on funding from the federal government.

“[Do] I believe the state will be paid back? Absolutely,” said Rep. David Cook (R-LD8) said in pushing for the loan earlier this month.

-$2 million redirected from programs for “system conservation,” which incentivizes Colorado River water users to leave water in the river system.

-$9 million from groundwater withdrawal fees that previously went to the Arizona Water Bank.