Step Back In Time With The Arizona Memory Project

If you’ve never heard of the Arizona Memory Project, you’re not alone.

It’s like a digital public library and this is a story about the team who are working to preserve the state’s rich past for our future.

"One of the things that I think is fascinating that I'm trying to get digitized are these 'Arizona Safety Sad-istics,' which is a really odd title for something," said Brandy Helewa.

"And it was published by the Arizona Highway Department from the '50s into the 1970s."

Justin Stabley/KJZZ
The Memory Project is supported by the Arizona State Library, Archives and Public Records, a division of the Arizona Secretary of State's Office.

Helewa says this is the kind of stuff genealogists go nuts for because it contains a lot of very specific details.

"And it has people’s names, where the accident happened, the city it happened in," she said. "So, on this page, we have in Maricopa County, we’ve got several different accidents. In here, we have one that was a driver that was killed because his right front tire blew out, lost control, he’s stuck in an embankment, that happened at 6:00 a.m. in 1965."

This is one reason why she and her team of volunteers and interns are trying to get these tiny time capsules scanned and uploaded to the Arizona Memory Project.

"So this is our Zeutschel Scanner," she said. "This is what we use for some our larger documents, like maps. We have a lot of the National Park Visitor Guides from Arizona, we'll put those on here." Besides the Zeutschel, there are other scanners for smaller items like books.

Peter Grant is the assistant administrator at the Arizona Research Library. He says that because all of this falls under the state of Arizona, "most of the state agencies are required to share all of their publications with us," he said. "Which means when they published something they are required to give us copies, both print and electronic."

Which is great for more recent publications or documents. In fact, Grant says there's a collection of attorney general opinions, as well as a collection of executive orders, issued by Arizona governors over the years.

Justin Stabley/KJZZ
Officials estimate there are close to 500,000 items in the Arizona Memory Project.

But what about those older documents? Like before photocopying was readily available and when carbon paper was a thing? Luckily, government was really good about making copies, "and sometimes we find fourth and fifth and sixth and even more copies of some stuff because they didn't know in the '40s and '50s that there would be digital copies," Helewa said.

As for those extra copies, Helewa said they recycle them once they’ve been scanned. Helewa finishes scanning the 'Sad-istic' newsletter; optical character recognition software makes the text searchable, then it gets uploaded and available to anyone — for free.

The work can be tedious at times, especially if you’re scanning say a 200 page document (which can take about two hours said Helewa), "but just finding these random things that are interesting that the state agencies published," she said. "One of the other things that is a favorite item of mine is called La Roca and it was a newsletter that was published and put together, a literary journal," by and for the inmates of the Arizona State Prison in Florence.

"And its fascinating to read the things they were writing about," she explained. "The art that they put in there and the poetry and the short stories is really cool."

"Let’s see how many times I can get my password wrong," joked Ryan Ehrfurth, who is the digital history and maps librarian. "So, what I'm doing is I'm going to the Arizona Memory Project website."

He says there’s close to 500,000 items in the Memory Project, so making it easy to navigate is important.

"You can see that we have these big buttons," he said. And there are several categories including, state government, historic digital newspapers, history and culture, maps, oral histories, photographs.

There are thousands of photographs in the Memory Project of people both ordinary and extraordinary, like Josephine Goldwater and Ruth Reinhold, one of the first female pilots in Arizona — as well as the notorious, like Winnie Ruth Judd, aka the "Trunk Murderess." Ehrfurth said there's a collection dedicated to her, as well.

There are also photos of place and collections about events, including the deportation of more than 1,000 striking miners to the middle of New Mexico.

"We have the Cochise County clerk, of the Superior Court. That one's pretty interesting because they contributed to collection of Bisbee deportation documents. So back in 1917, you have the Bisbee deportation and basically a labor dispute. The turned into deporting hall, the workers out of the state."

"They recently contributed a collection that’s the correspondence between, Percival Lowell and A.E. Douglass, essentially deciding that Flagstaff would be where they would place the observatory."

From those collections, have come about 220 different collections, like the Earle Forrest Collection, images from the Edward Curtis Collection at the Arizona Capitol Museum, or Arizona's "Saints and Shady Ladies."

But for the people in this story, the work is never ending. In fact, there’s a vault with hundreds of boxes that have yet to be opened. They call them "unwashed" boxes and the team has no idea what's in them. "So, all of those some day will be gone through and there might be some really cool stuff in those boxes," said Helewa.

Within these concrete walls is our history, much of it well known, some yet to be told and it'll be the people in this story who will get that chance. 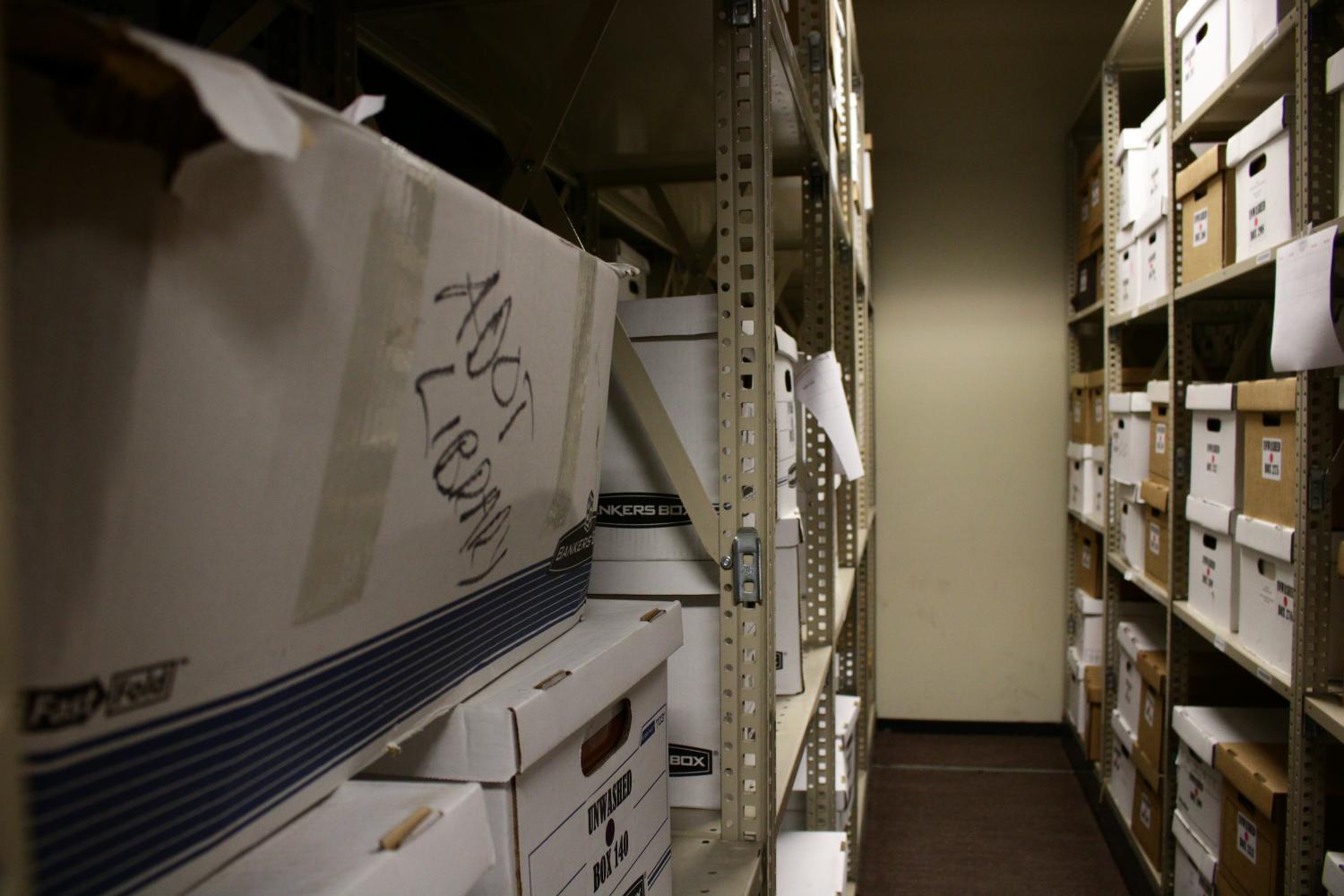 Justin Stabley/KJZZ
There’s a vault with hundreds of boxes that have yet to be opened. They call them "unwashed" boxes and the team has no idea what's in them.
The Show