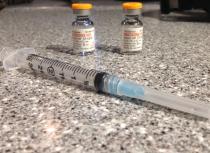 Doctors and some emergency responders have a medicine that can reverse opiate overdoses. There’s a movement to make naloxone available to without a prescription. Thirty states and Washington D.C. have laws or programs protecting non-medical professionals who have, give or use naloxone without a prescription. Arizona isn’t one of those states, but that doesn’t stop one man from doing it.

At a convenience store just north of downtown Phoenix on a Saturday night, a white car pulls up and Michelle Roper gets out. In the parking lot she receives a paper bag with naloxone.

“I look at it as a godsend," she said through tears. "I have some friends that would have been dead right now.”

“He was purple and his jaws were locked already. And I had to break his jaws loose,” she said. “[It wasn't until] the second bottle [of naloxone] he caught his breath and starting breathing on his own.”

Roper has used naloxone to save four other people in the last six months. The kits she received this night have two vials of the liquid and clean needles.

The medicine is used in emergency rooms but Roper is getting it from someone we are calling Richie. We aren’t using his real name because what he is doing is a felony and punishable by up to two years in prison. Richie gets naloxone from out-of-state health groups.

“As far as I know only person doing this in the county,” he said. “People that I meet up with and train on how to use naloxone, they're not really the ones overdosing, they are the ones that are administering and bringing people back from overdose.”

His work is underground. He has built his network by word-of-mouth.

“Most of my experience is talking to folks who are saving people’s lives, rather than getting their lives saved,” Richie said.

Richie trains drug users and their families and friends. He isn’t a medical professional, but has first-hand experience with opiates.

“I used to use heroin for about five years. I started using prescription opiates first, but heroin is cheaper, typically, than prescription drugs. Especially if you’re buying them illegally," he said.

After getting clean, Richie decided he wanted to help other drug users through a method called harm reduction.

“Its primary purpose is to reduce harm. It’s the basis to all moving forward from there," he said. "If you’re not alive then you’re not going to change your life.”

But some in the medical profession are skeptical of giving the medicine out to users. Dr. Michael Sucher is the medical director at Community Bridges, a statewide nonprofit that treats drug users. He warns people need to be aware of the medication's limitations.

“Naloxone may make people have a false sense of confidence that they can continue or that the naloxone will save them from a one-time use, which it may not,” Sucher said. “It’s not treatment for drug addiction and it probably won’t last as long as reversing the overdose as the drug that caused the overdose will."

Richie thinks harm reduction efforts like distributing naloxone are essential to those who may eventually seek treatment. The only state-sanctioned effort in harm reduction is in Tucson. Miguel Soto works at the syringe exchange funded by the Pima County Health Department. He said the department has an arrangement with law enforcement.

“Because they know where it is, what it is, they leave us alone,” Soto said.

Back at the convenience store, Roper said drugs are a reality, but she remembers a darker time when naloxone wasn’t available.

“Back in the day...if they knew that you were gone [from an overdose] they wouldn't even try to work on you, they would just throw you in the alley. And I’ve seen that so many times it’s just so sad," she said.

The Arizona Criminal Justice Commission reported in 2013, nearly 500 people died opiate-related deaths in Arizona. Richie hopes one day naloxone will be more readily available in Arizona like it is in other states.