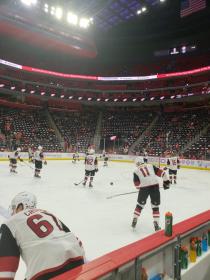 Amanda Luberto/KJZZ
Arizona Coyotes on the ice in 2019.

STEVE GOLDSTEIN: Ownership drama with the Arizona Coyotes is nothing new. In fact, it's been a consistent part of the organization's narrative almost since the team moved to the Valley from Winnipeg. Recent rumors have the Coyotes potentially moving to Houston under new owners, but nothing solid had actually been reported. That may have changed last night when John Shannon of Sportsnet in Canada reported that majority owner Andrew Barroway is moving into a minority position and new partners are coming in. And Shannon is with me from our neighbors to the north to talk about that. John, you reported the Coyotes will be undergoing another ownership shift. What specific information can you share with us at this point?

JOHN SHANNON: I've been trying to track down who it actually is, and as soon as I found out about the impending sale, everybody went dark on the discussion. But I can confirm that, yes, Mr. Barroway will be vacating his majority position within the hockey club, will still maintain a minority position with the hockey club as the NHL and the new owners close the deal, probably between now and the board of governors [meeting] in June.

GOLDSTEIN: There had been a lot of discussion about Andrew Barroway looking for partners, looking for minority investors. Was Barroway really the entire time looking for someone to take over a majority rather than get some more partners?

SHANNON: No, I think every owner who enjoys the position of being in that very, very exclusive club would like to be able to get an injection of cash and still maintain control. But at a certain point, when debt becomes an issue, that becomes impractical. And we've seen this before. We saw it in Carolina in the last couple of years, where the former owner, Peter Karmanos, wanted to get a minority partner, so take his money but still maintain control. And no one in their right mind will do that. No one that's going to talk about covering debt and injecting cash into a club in the hundreds of millions of dollars is prepared to do that and not have business control. So as much as Mr. Barroway wanted to do it, it just wasn't practical.

GOLDSTEIN: Have the Coyotes' losses then been sort of underreported? Has the financial situation been even worse than we'd sort of imagined?

SHANNON: I don't know if it's been worse. You know, the Coyotes have been in a difficult position. On the hockey side, we have seen constant improvement over the last two or three years. The Coyotes have been a huge, huge beneficiary of revenue sharing ever since revenue sharing started, and it gets them closer to a zero balance on a regular basis. But there's no question that this is a team that still loses a lot of money.

GOLDSTEIN: We know the NHL loves the Phoenix market, the general Phoenix market, so how much of this comes down to the fact that there's still this arena situation in flux? How much does that cause problems?

SHANNON: Well, as one NHL official told me yesterday, when I asked that very question, I said, "Does this new owner mean that there's an arena closer to fruition?" And the answer was, if you get a new owner, there's a better chance of a new arena. So you can put two and two together, Steve. Anybody that's coming into this, into this auction, and buying this organization has to have a way and have a plan of trying to create a new venue for the hockey club. The interesting thing now, Steve, is that there are a great deal of rumblings — more than rumblings — that, very quietly, Robert Sarver has put the Suns up for sale. One of the issues that has always been in the Valley of the Sun — and I don't have to tell you this — is that for the size of the market, it makes no sense to have more than one arena. So if, in fact, the Suns are able to be sold in the next year or two — and it's not public yet, but he certainly has launched a very quiet, private sale message out there — maybe this is the last chance to see the Suns and the Coyotes play in one venue in the city of Phoenix. And quite frankly, it makes the most sense, period, for both organizations.

GOLDSTEIN: OK, John, let me pick myself up off the ground for a second after that one because the Suns just hired a new head coach, and the talk was that Robert Sarver was gonna be less involved in the club. There was also controversy recently that, as the Suns were trying to get a refurbished arena, that Sarver had supposedly threatened a move to Seattle, which his people denied. I was actually going to say that there are some writers out here in the Valley who are questioning whether your comments on there being smoke and fire with the Coyotes are accurate. So now you're saying this. This is big stuff.

SHANNON: Well, you know, the the world of sports is a very small world, and I can assure you there might be writers in your market that might question my sources. I can tell you that my sources are absolutely impeccable on this story about the Coyotes. And then what came to discussion last night from another story was that yes, in fact, Mr. Sarver is quietly trying to sell the basketball team as well.

GOLDSTEIN: That is John Shannon of Sportsnet in Canada, providing some amazing information as it relates to Coyotes ownership, maybe even Suns ownership. John, thanks so much for the time today.