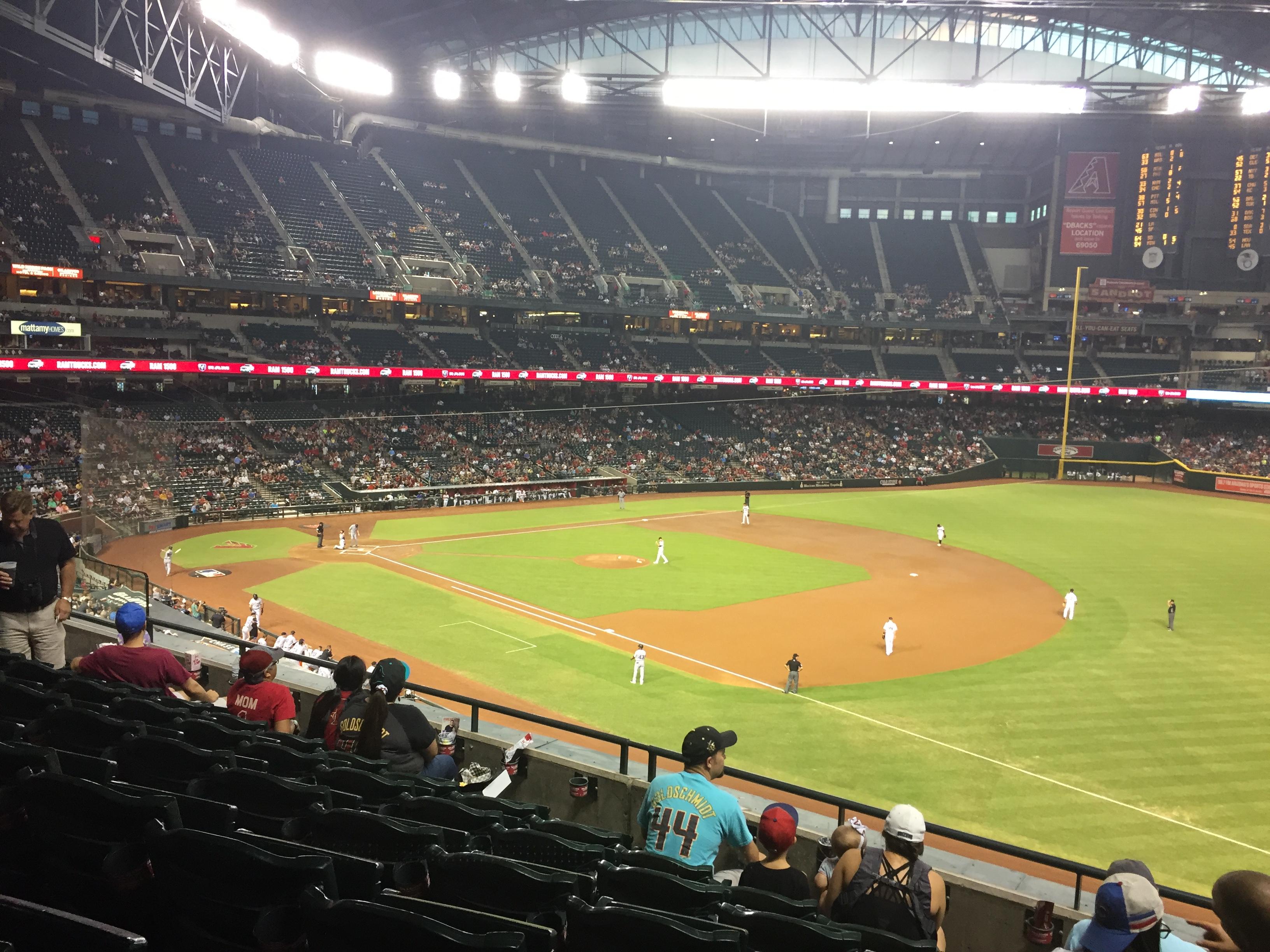 Katherine Fritcke/KJZZ
The Arizona Diamondbacks take the field at Chase Field in Phoenix.

MARK BRODIE: An opportunity to potentially leave Chase Field in 2022 has increased speculation about where the Arizona Diamondbacks can play after that and what their priorities for a new stadium would be. And thanks to AZ Snake Pit, a blog that follows the Diamondbacks, we have some ideas that a publication found images posted on the Web site of MEIS Architects, a prominent stadium and arena design firm, that looked to include possibilities for a new Diamondbacks home field. Brandon Brown of the Phoenix Business Journal wrote about the images and what they could mean for the D-backs future and he spoke with our co-host Steve Goldstein.

STEVE GOLDSTEIN: Brandon, what is the background on this and where the Diamondbacks stadium connects with these images?

GOLDSTEIN: I'm pulling up your website right here. So, what are we supposed to read from this, I'm wondering? It's sort of to be honest with you, I don't know if you've been out to the Diamondbacks spring training stadium off of the [Loop] 101, it sort of looks like a bigger version of that to me.

BROWN: It kind of, kind of does look like a bigger version of that. It has a it looks like there's a retractable roof situation that can kind of come through. We have a couple of different pictures on the Business Journals website but it looks like there's a roof that kind of can cover a part of it and also come back down, but it looks a lot more open than Chase field does right now, but it does kind of have a same similar feel to Salt River fields out there on the tribal land.

GOLDSTEIN: I want to get into the fact that you actually then reached out to the Diamondbacks, what did they have to say to you?

BROWN: They didn't have very much to say ...They just sent me one statement that said they've talked to a number of architecture firms about possibly renovating Chase Field or building a new stadium. But they said they never actually seen these renderings, which as a reporter you know they say that to me but I've kind of a hard time believing, because in my experience architecture firms aren't just drawing up renderings you know out for nothing. You know it's a very expensive process, it takes a lot of time and you know they charge a lot for that, they charge a lot for their time. So maybe the Diamondbacks haven't seen those renderings, maybe they saw it first on our website but ... I have a hard time believing they didn't pay for them at least.

GOLDSTEIN: Is there any thought among anyone that the Diamondbacks are not seriously looking to get out of downtown? I know there's a hope that they'll stay but does this give us any weight to consider — yes, there's smoke where there's fire potentially.

BROWN: This gives a lot of weight to that there. For the last year since the Diamondbacks and the county reached that agreement, and the Diamondbacks, you know, had a potential accident in 2022, there's been nothing but rumors going around. And you know they're rumors and so we don't need to talk about every single one of them. But there's a lot of rumors going around saying, you know — "The Diamondbacks are thinking about this," "I heard the Diamondbacks are meeting with these people." And, you know, I've never been able to, you know, straight up confirm … one specific thing or another. But I think there has been a lot of talk about it there, while the Diamondbacks put in new turf this year, they haven't made big changes to Chase Field, which they were, you know, legally able to now after that deal they made with the county. And so it kind of seems like if they're going to be exiting the field and exiting Chasing field the next three, four years they've got to start making plans for where they're going to go soon.

GOLDSTEIN: And coming back to what we said about the similarity to Salt River fields, is there a feeling among many that based on availability of land, based on money that it wouldn't be out of the realm of possibility that they might be talking to tribal entities about moving there?

GOLDSTEIN: And the fact that the architectural firm took down its images after the writer for that Diamondbacks-related blog inquired about it, does that give us more reason to think maybe there's something to this? Maybe they just don’t want to let it out of the bag?

BROWN: Yeah, in my experience when someone takes something down off the internet, it kind of means we shouldn't have put it up there in the first place. You know, kind of like, “Oh, we didn't want people to see this yet.” The Diamondbacks, just like a lot of sports teams, like to control their story and ... if they're going to release these things they want to do it on their own terms. And so, I would think, that is probably one of the reasons why it was taken down.

GOLDSTEIN: Brandon Brown is a reporter for the Phoenix Business Journal. We've been talking about the possibility of where the Arizona Diamondbacks might be moving to — based on some images from an architectural firm. Brandon, very good to talk with you. Yhanks for the time.