A report submitted in federal court by attorneys representing inmates in Arizona prisons claims pregnant women are suffering from "deficient" and "dangerous" prenatal and postnatal care.

Attorneys from the Prison Law Office and ACLU toured the Perryville prison in Buckeye for three days from April 2 to April 4, interviewing 25 women who had recently given birth or miscarried.

"They are being horribly mistreated by the health care staff and the custody staff," Kendrick said of the women at Perryville. "They're not being provided adequate nutrition. They're not being given adequate hygiene supplies. The postpartum depression mental health care is minimal if existent at all."

Kendrick said pregnant women reported receiving only an extra peanut butter sandwich and glass of milk in their diets and had limited access to fruits and vegetables. She says inmates who had given birth were given thin panty liners to deal with bleeding.

The attorneys say they discovered breaches of state policy, including one woman who was shackled while being transported to the hospital.

The report says the woman complained of abdominal pain and bleeding and told medical and correctional staff "I'm losing my baby."

"Arizona state law says that women who are pregnant who are being transported for delivery should not be shackled," Kendrick said. "Nevertheless we did find the medical notes showing the woman being transported off-site to deliver her stillborn fetus while shackled." 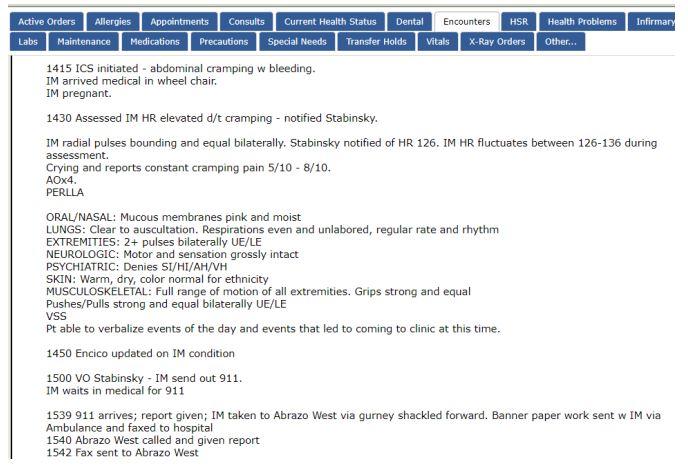 PACER
Notes show that a pregnant inmate was shackled while being transported to the hospital.

Prison Law Office attorneys said they found several instances of women who were addicted to heroin who were not given proper treatment.

"Proper treatment for women who have reporting using heroin when when they were pregnant is to immediately put them on methadone," Kendrick said. "That's to manage any withdrawals and to also mitigate the possibility of a miscarriage."

One seriously mentally ill woman reported she had recently given birth in the toilet of her cell, alone. Kendrick said after the woman's water broke, she was sent from the prison to the hospital, only to be returned to Perryville the same day.

"For reasons that the hospital did not explain to her," Kendrick said, "she did not come back with any paperwork from the hospital." She says records from the prison back up this claim. Kendrick says the woman was returned to her cell instead of the infirmary at the prison, increasing her isolation. For three days, Kendrick says, the woman received no medical attention.

"When she went into labor, she was screaming and banging the door," Kendrick said. The Prison Law Office attorneys interviewed other inmates in the unit that night who corroborated the story. "All the other women around her woke up and started screaming and banging on their doors," Kendrick said. She believes it took 15 to 20 minutes before an officer finally came and found the inmate with her her baby.

Kendrick says the woman was previously diagnosed with schizophrenia and had at one time been administered drugs involuntarily for her condition. The report says the woman " felt the baby start to come out, and was in excruciating pain and sat on the toilet, defecated and delivered the baby into her hands and continued to scream for help."

After another woman told medical staff she "felt a pain she had never felt before," she was sent back to her cell with Tylenol. The inmate would later give birth to a stillborn baby at 34 weeks of pregnancy.

The women at Perryville told the attorneys postpartum depression is not being properly treated.

"What we found with postpartum depression and mental health care in general is that they were very quick and perfunctory encounters," Kendrick said of the care offered to the inmates. "These women have just given birth. They're giving up their children for an indefinite amount of time. Obviously they need more than two or three minutes of therapy or counseling."

Kendrick says for the first time in the Parsons versus Ryan prison health care settlement, the plaintiff attorneys are invoking a provision that allows them to suggest a corrective action be taken against a medical provider in an Arizona prison. Kendrick says the OBGYN at Perryville, Dr. Vicente Enciso, should be held accountable for poor medical care at the prison.

Kendrick says her office has received complaints of inadequate medical care about Enciso since 2011. "In the past, our experts have called out his care as problematic if not completely inappropriate," Kendrick said. "For example, several years ago our expert discovered one woman who had a C-section incision that was not properly healing, and so the medical staff put sugar in the incision in an attempt to pack it and heal it."

In the most recent interviews, attorneys spoke to another woman whose C-section became infected and opened up. Records show nursing staff packed the wound with gauze and taped the incision shut.

The attorneys are now asking that Enciso's actions be reviewed by medical professionals.

KJZZ has asked the Arizona Department of Corrections and Corizon Health for a comment on the report. This story will be updated.