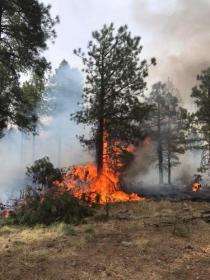 inciweb.nwcg.gov
The Woods Fire burning in northern Arizona on May 12, 2018.

A wet winter in Arizona was cause for a lot of optimism, particularly that the state's seemingly endless drought would be alleviated. But the precipitation also led to more plant and grass growth and more potential fuels for wildfires.

A recent feasibility study by APS showed the utility could convert a power generator at its Cholla Power Plant over the next few years, and that conversion could help the process of forest thinning by burning the byproducts.

That may also have an impact on a request for proposals with the Four Forest Restoration Initiative, a large-scale forest thinning project that began about a decade ago.

Tom Torres, deputy forest supervisor for the Tonto National Forest, joined The Show to talk about the RFP and the status of the project.