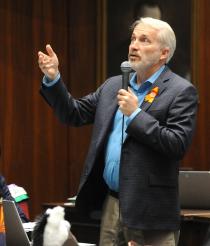 Normally, Arizona's Legislature aims to wrap up 100 days after session begins in mid-January. As of Tuesday, lawmakers are now past that deadline.

Tuesday was day 121, which means out-of-county lawmakers are now entitled to $20 and in-county lawmakers will get $10. Despite the cut in per diem, taxpayers will continue to foot the bill until they go home.

Tucson Democrat and Assistant Minority Leader Randy Friese has said that will not take him off task.

"I don't think we should be rushing, just because our per diem has run out or someone's going on vacation, to deal with Arizona's budget. I signed up to work, I'm here to work."

The budget's passage is key to the session ending.

Friese and his party have indicated they're ready to vote for Gov. Doug Ducey's proposal. However, several GOP lawmakers are holding out until their own bills are passed.

EDITOR'S NOTE: This story has been modified to correct the time of session.