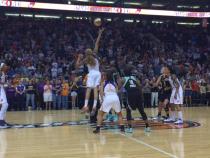 Phil Latzman/KJZZ
Tipoff during a Phoenix Mercury game in Phoenix.

The Phoenix Mercury will hold their home opener for the 2019 season on May 31. The WNBA team has sold out a regular-season game just once, back in their inaugural season of 1997. But one supporter has made it his mission to pack the arena again.

Christopher Owens is a spoken-word poet known as Truth B. Told. He purchased 7,000 tickets for the Mercury’s home opener, every single seat in the upper deck of Talking Stick Resort Arena.

He’s been a basketball fan all his life, and he’s a huge supporter of the women’s game. He said he wants to grow the fan base.

“This is a huge opportunity," Owens said. "As a society, we are in a moment where there’s a lot of change coming in different areas, and I think the time has come to finally give women’s sports their respect and their due.”

He is re-selling the tickets at discounted rates ranging from $2 to $5, and he says he hopes individuals and businesses would consider donating money to bring girls basketball teams to the game.

“Our goal is to have at least 50 girls basketball teams or youth groups throughout Maricopa County to be sponsored," Owens said. "Right now we are right around 30.”

Interested individuals can email him at [email protected] to purchase tickets. Owens said he intends on doing this for another game later this season.