New International Symbol Of Access Approved By City Of Phoenix 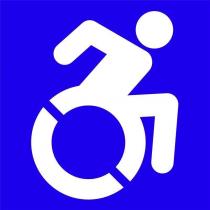 For more than 40 years, the International Symbol of Access used on parking spaces and parking signs was a mechanical-looking stick figure restricted to a wheelchair. For many, the icon failed to represent their reality. But that's changing.

It didn’t take much for the City of Phoenix to bless the new accessibility icon, which features a dynamic figure actively moving forward and replaces that static stick figure sitting in a rigid chair. In fact, Peter Fischer, the city’s ADA Coordinator, said he really only needed to get the OK from the city’s Development Services Department, which he did.

"Anything that alludes to or acts as the International Symbol of Accessibility, the federal government approved and allows, so we’re doing the same," said Fischer.

Businesses aren’t legally obligated to replace those outdated blue-and-white parking signs. But Fischer hopes new businesses and existing ones will soon start featuring the new design. So does Jennifer Longdon, a disability rights activist. For Longdon, who is paraplegic, the newly approved signage matters regardless if you’re a person with disabilities or not.

"However subliminally or unconsciously a message is given, that wheelchair users, that people with disabilities are passive, clumsy perhaps," Longdon said. "The new icon, when you look at it, this is an individual who is pushing themselves, and that is a big deal."

Fischer said the next step is to educate the public about the new signage.