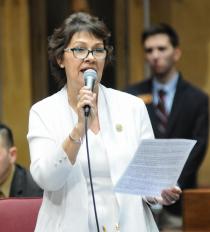 A group of Arizona lawmakers have called it morally wrong to push ahead with legal relief for individuals convicted of certain sex crimes while refusing to do the same for victims.

The argument came to a head at the Capitol on Tuesday as two bills were pitted against one another.

The first is Senate Bill1255, by Sen. Paul Boyer, which would expand the amount of time victims can file suit to seven years after realizing they were sexually abused. That bill has sat waiting for a committee hearing since January.

Sen. Eddie Farnsworth, who chairs the Senate Judiciary Committee, has refused to hear it unless it stipulates child sex abuse victims cannot sue after age 25.

His Democratic colleague, Sen. Victoria Steele has made the issue personal, sharing that she had been raped repeatedly as a child by her grandfather.

"I didn't know it wasn't my fault,'' she told colleagues. "It wasn't until I was in my 40s I realized I was not his only victim.''

She was most vocal at Tuesday's hearing as senators debated the merits of a second bill by House Speaker Rusty Bowers that would give individuals under 21 who are convicted of soliciting or having consensual sex with a teenager the chance to petition for removal from the state's sex offender registry.

"Everything in my life is meant to help people not have to deal with that kind of trauma. That's the whole reason I'm in this Legislature," Steele reminded her colleagues, then asked, "If we can't pass Mr. Boyer's bill to extend the statute of limitations, then what the heck are we doing here?"

In the end, the Senate agreed with Steele and killed Bowers' bill providing legal relief for some sex offenders.