Rural Arizona Teachers Inspired By Walkout To Grow Their Own 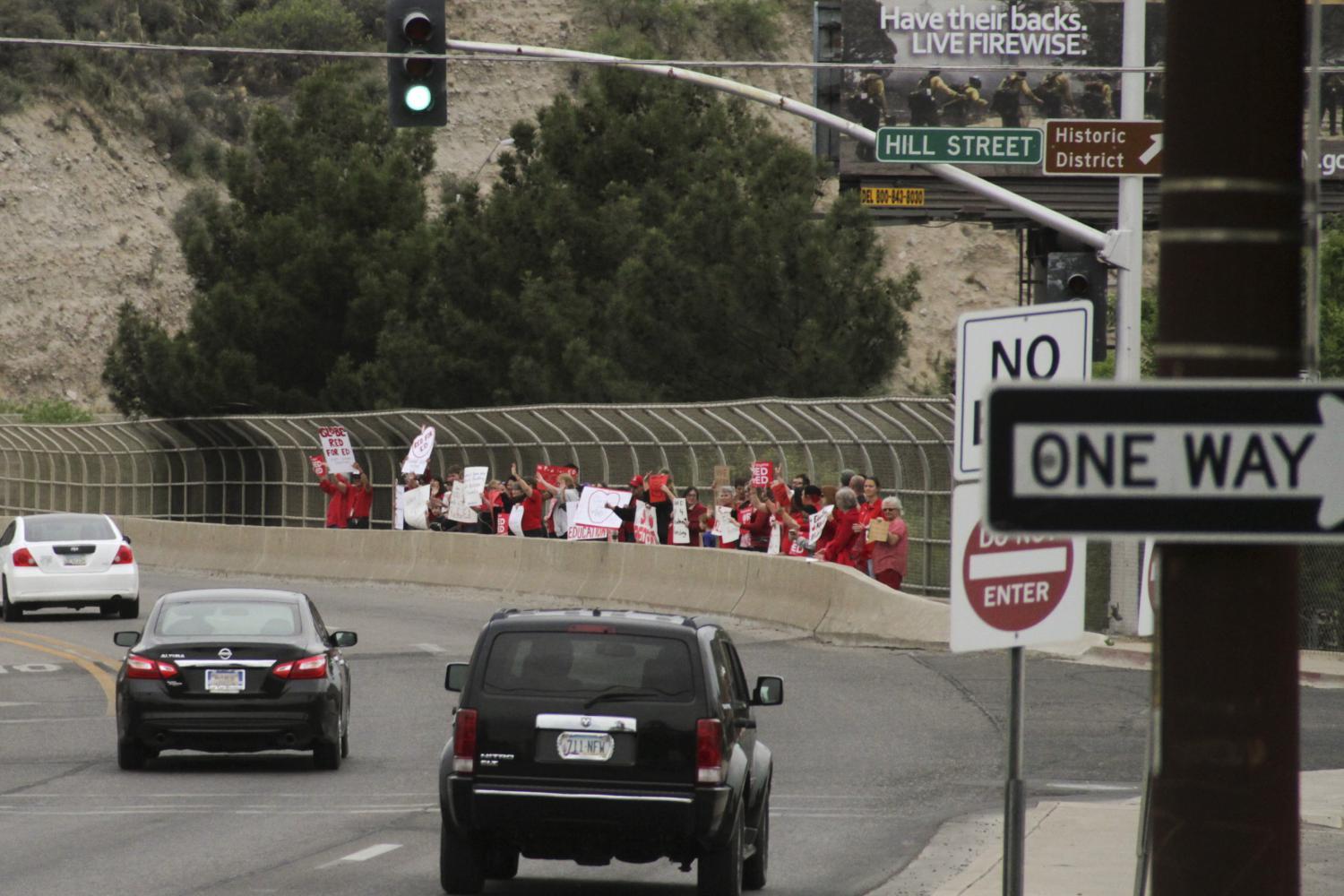 Mariana Dale/KJZZ
"Often times being a smaller area we feel like maybe we get forgotten in the hustle and bustle of big city life, but seeing our community come together and have such a loud voice and have so much support is just awesome,” said teacher Erika Flores.

One year ago, I stood on a highway overpass that cuts through the historic mining city of Globe with dozens of educators and community members in red shirts.

“Being a smaller area, we feel like maybe we get forgotten in the hustle and bustle of big city life, but seeing our community come together and have such a loud voice and have so much support is just awesome,” said then first grade teacher Erika Flores as drivers honked in support.

I went back to Globe recently — it’s a beautiful drive through a rocky canyon, if you’ve never been — to see what’s changed in the year since the teacher walkout.

I met Globe Superintendent Jerry Jennex on a tennis court on a weekday after school.

His high school doesn’t have a tennis team, but it did have students who wanted to play tennis. 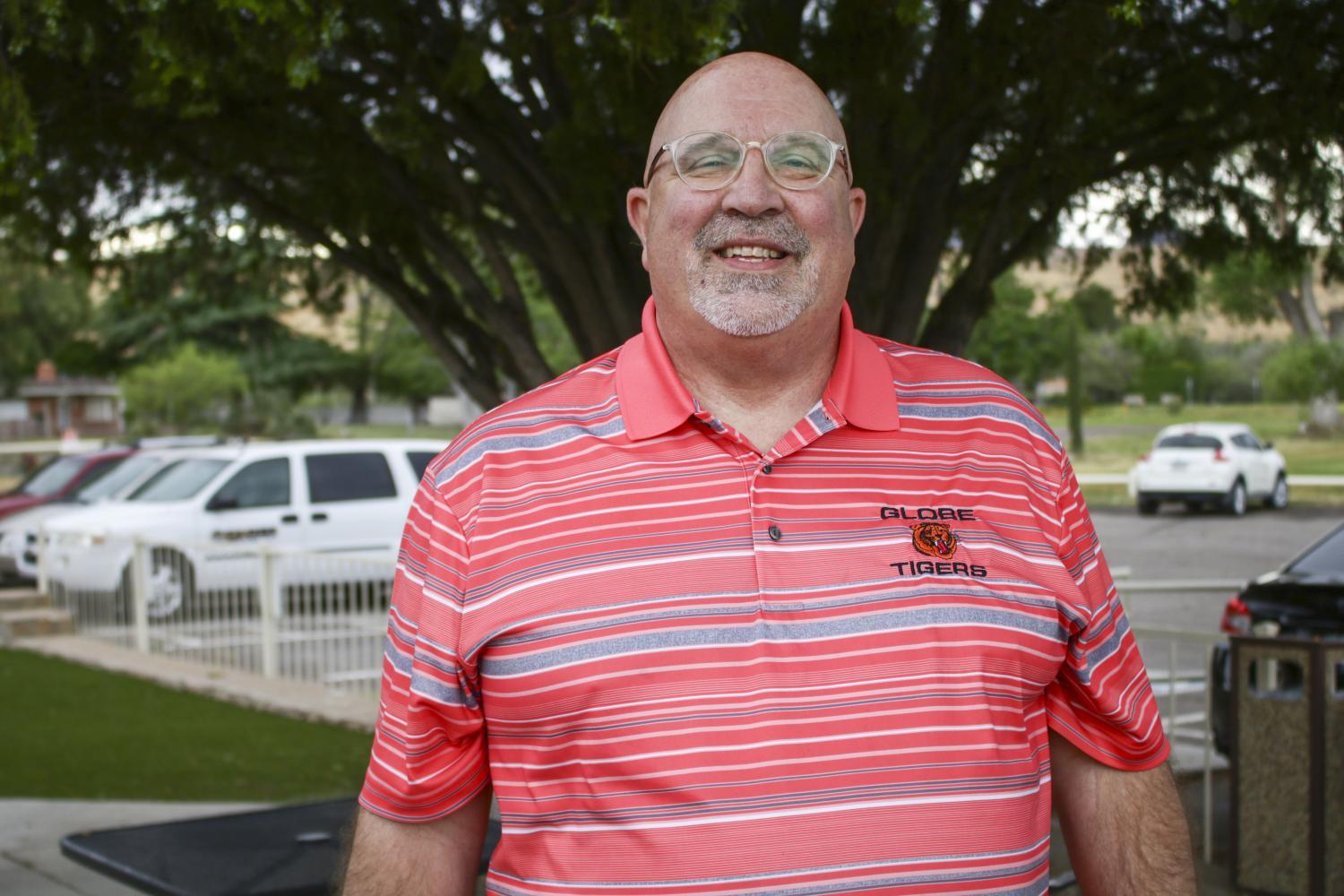 Mariana Dale
“Our district does not have an override. We do not have a bond issue. So we have to live within what we receive from the state," Jennex explained of the Globe district's financial picture.

So the superintendent called the mining company the owns that the rec center and asked if he could bring students here to play.

“We hope maybe next year to have a team,” Jennex said. “I probably won’t be the coach,” he added, laughing.

Jennex has spoken optimistically about the small Eastern Arizona district since he started as superintendent in 2012 and today is no exception.

“It’s never been a better time to be Superintendent for me than when I can see these hardworking people get the kind of increase they deserved,” Jennex said. The district gave teachers the 9 percent raise promised with the 20 by 2020 plan and an extra 100 dollars per paycheck. He estimates some teachers received up to a 15 percent raise.

There are still challenges. This year the high school volleyball and basketball teams weren’t able to play a single home game.

“We has 1950s era heaters that blew up and wrecked our gym,” Jennex said. Insurance would pay for the flooring, but only if the district replaced the heating and cooling systems at fault.

The State’s School Facilities board kicked in $154,847 for those fixes and  repairs are underway.

Teacher turnover is a more complicated problem to solve.

The district switched to a four-day school week to save money and incentivize teachers several years ago, but Jennex said in the past as many as 20 percent of the district's approximately 100 teachers didn’t return.

He predicts there will be about 10 openings next year.

“What our students need here and what they’ve lacked for a long time is consistency,”  said teacher Erika Flores, who this year has a mixed level classroom of first and second graders.

Teachers who aren’t from Globe often stay for a few years and then leave. 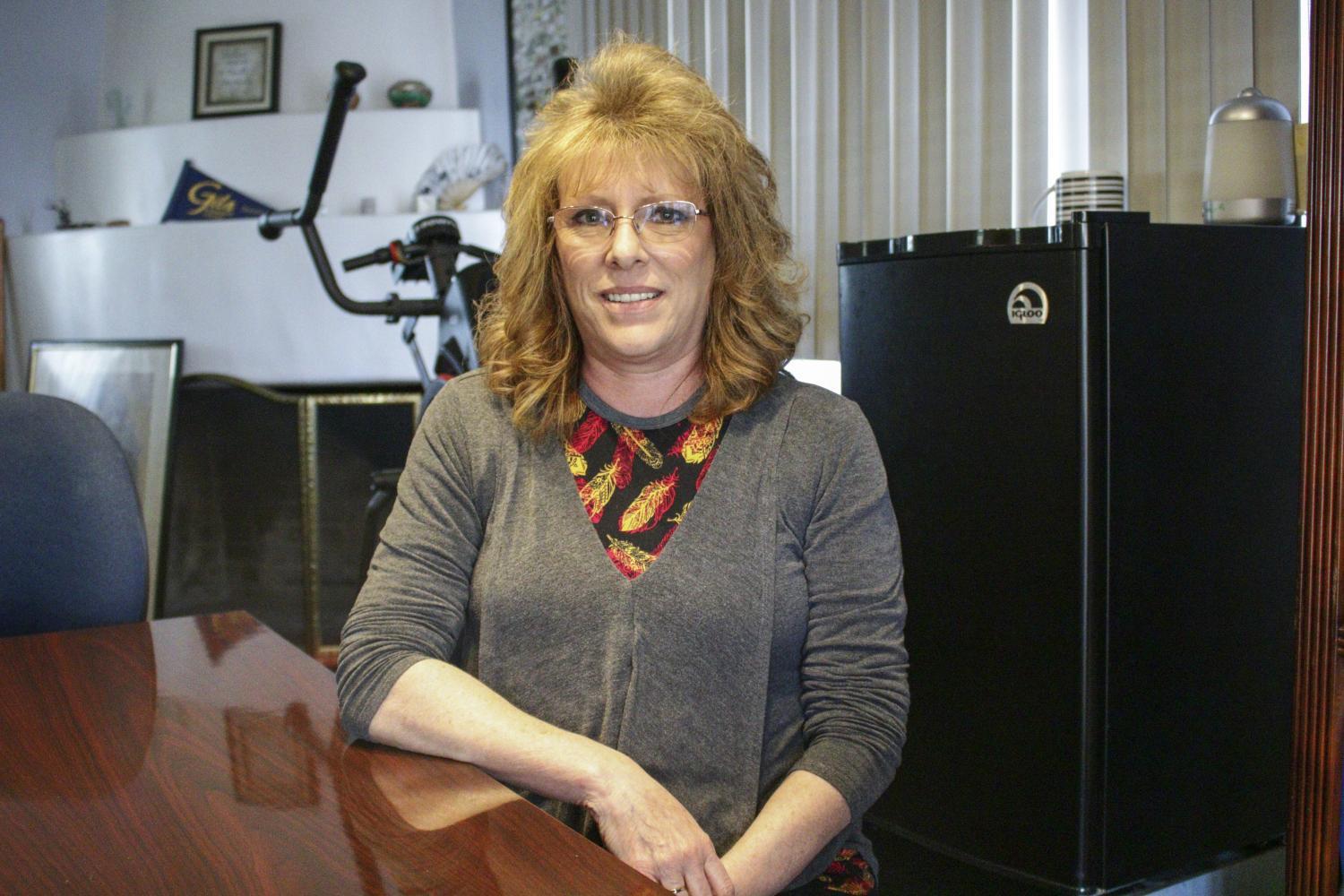 Mariana Dale/KJZZ
Burke said Gila Community College's attitude is, ‘“We want you to tell us what do you need and we’ll make it happen.”

After the strike last year, Flores remembers talking about the problem with her husband.

”He’s super proactive, and he said, 'So what can you do about it? What are going to do?'”

‘From Talk To Action’

Flores went to the local community college with an idea.

“We need to grow them ourselves. We need to find them here, people who love our community,” Flores said.

She learned from Dean Patricia Burke that Gila Community College, which is a part of the Eastern Arizona College system, had offered education classes for years.

“Enrollment tended to be low because we could only offer a few courses at a time,” Burke said, she estimated some classes had two or three students a semester.

Flores went on Facebook and asked who had ever thought about being a teacher?

She got dozens of responses.

Flores and the administrators created a “teacher taskforce” and a plan to attract people from Globe, Miami and the nearby San Carlos Apache Reservation to the college.

Local teachers like Flores would lead the education classes.

“It went from talk to action in a very short amount of time,” Burke said.

Creating A 'Community Of Teachers'

Flores’ Tuesday Intro to Education class has eight students tonight, which includes several that join by video chat from Payson.

“These classes have totally changed my mind,” Michael Halbert, a student and bus driver for a local charter school. He’ll graduate from the college in the spring and plans to go to a four-year school to get a teaching degree.

In all this semester there are 56 students across the college’s education courses. 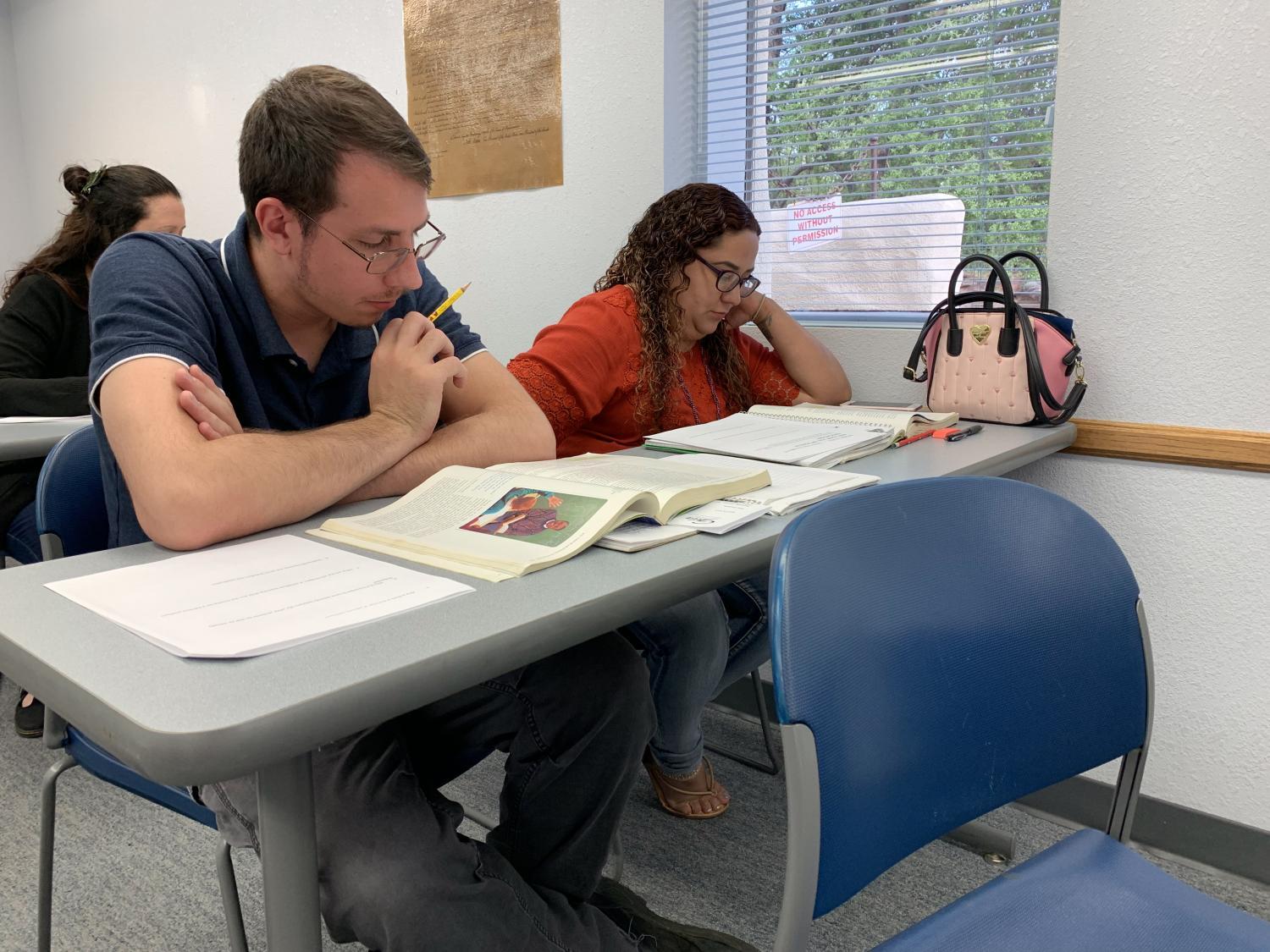 Mariana Dale/KJZZ
Michael Halbert and Ashley Barajas in Gila Community College's Intro to Education class. Halbert says one of the lessons he's learned is "Whatever you do, you want to make a difference in your students' lives."

Not all of them will stay.

Kelly Stennerson intends to the be the fourth generation of teachers in her family, but wants to explore the world outside of Globe.

“We’ll see where my life takes me,” she said.

Others can’t imagine moving anywhere else.

“I live in Miami and I’ve lived here my whole life and I want to raise my kids here,” said Ashley Barajas— this is her first college course toward becoming a teacher.

The mom of two has a job as a reading aid and found out about the class through the school she works at.

“Okay. I think I’m going to be able to do this,” she thought, thinking about busy schedule. “I’m just going to be tired all the time, which I already am.”

But it’s worth it. As a paraprofessional Barajas saw how valuable it was to create relationships with students who might have a difficult life at home.

“I want kids to feel comfortable around me and I want them to know that they can depend on me,” Flores said.  That’s what made me want to take the classes.”

Eventually she’ll be able to graduate with her bachelor’s degree without ever leaving Gila County through college partnerships.

For example, ASU offers a Bachelor of Arts in secondary education through Eastern Arizona College and plans to add programs for elementary and special education in the fall. 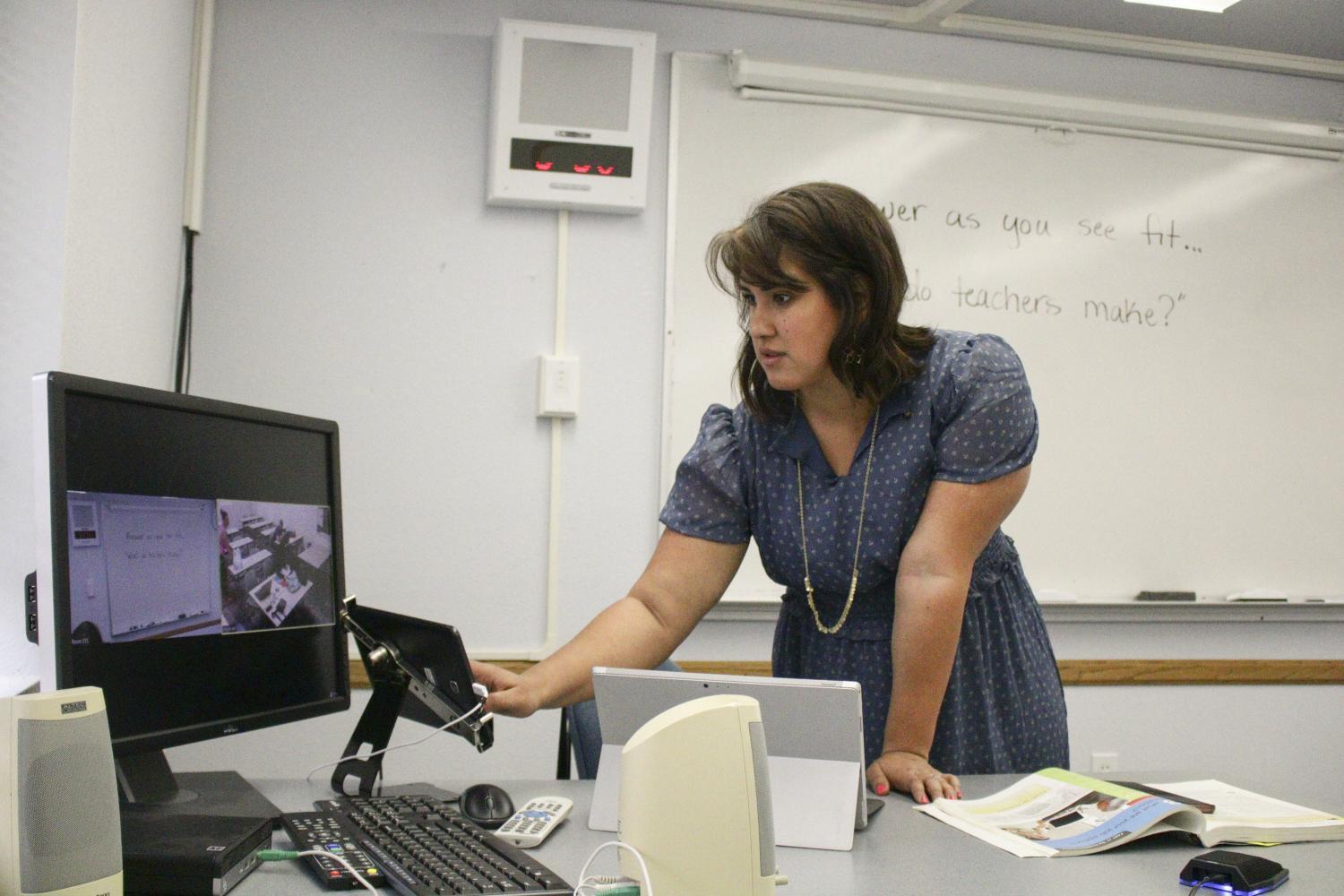 Mariana Dale/KJZZ
Erika Flores dials up students from Payson who participate in her Intro to Education class via video chat.

Barajas is exactly the kind of person Erika Flores hoped to recruit to local classrooms.

“I think what would benefit our students the most is to have a community of teachers and professionals in our schools  that are just 100 percent vested.”

Flores says she knows there are big problems in Arizona’s public education system.

“Sometimes you have to really zoom in on what you can do as an individual,” Flores said.

For her, that’s recruiting and teaching the next generation of Gila County teachers. 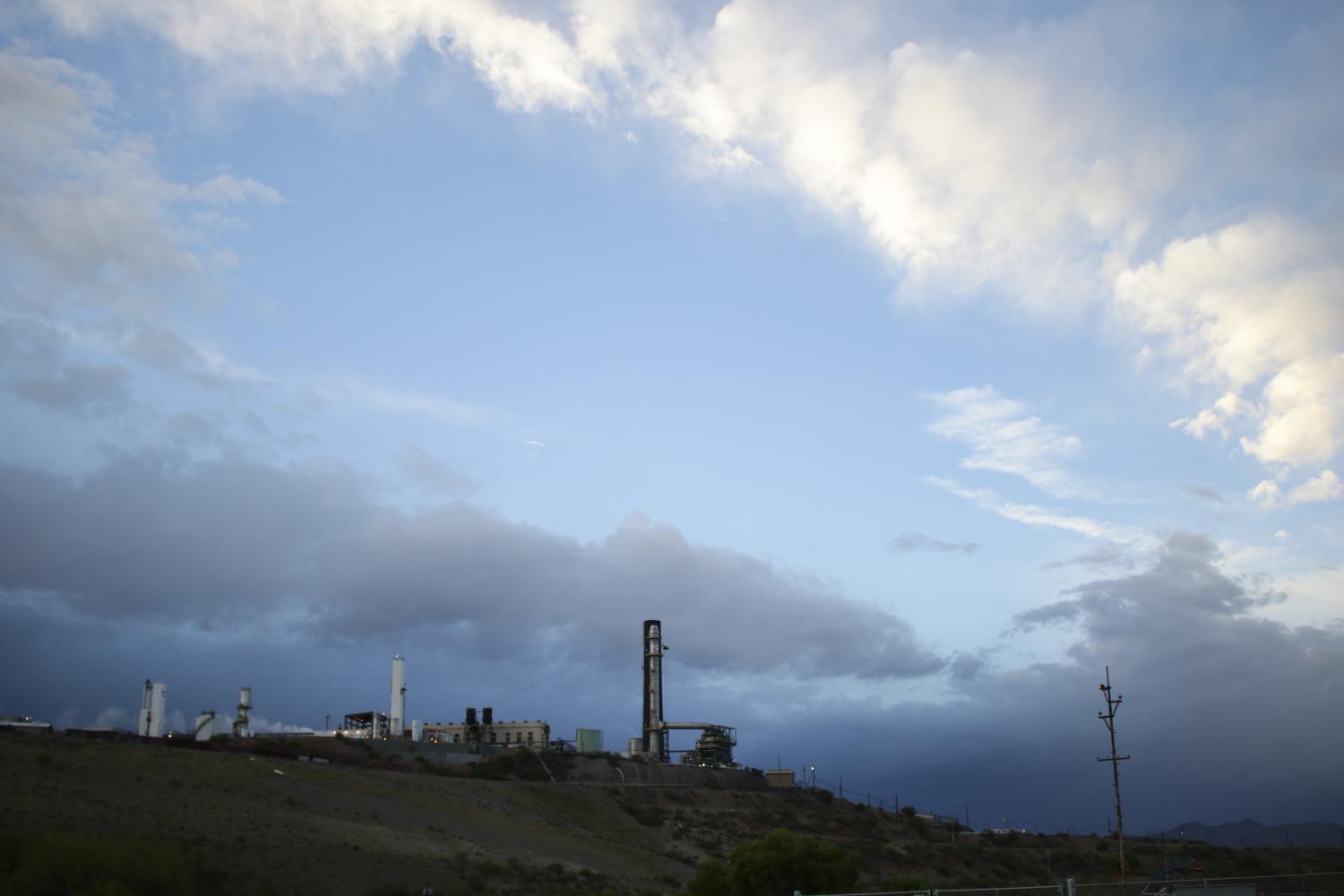 Mariana Dale/KJZZ
The Freeport-McMoRan copper mine in Miami, Arizona, as seen from US 60. 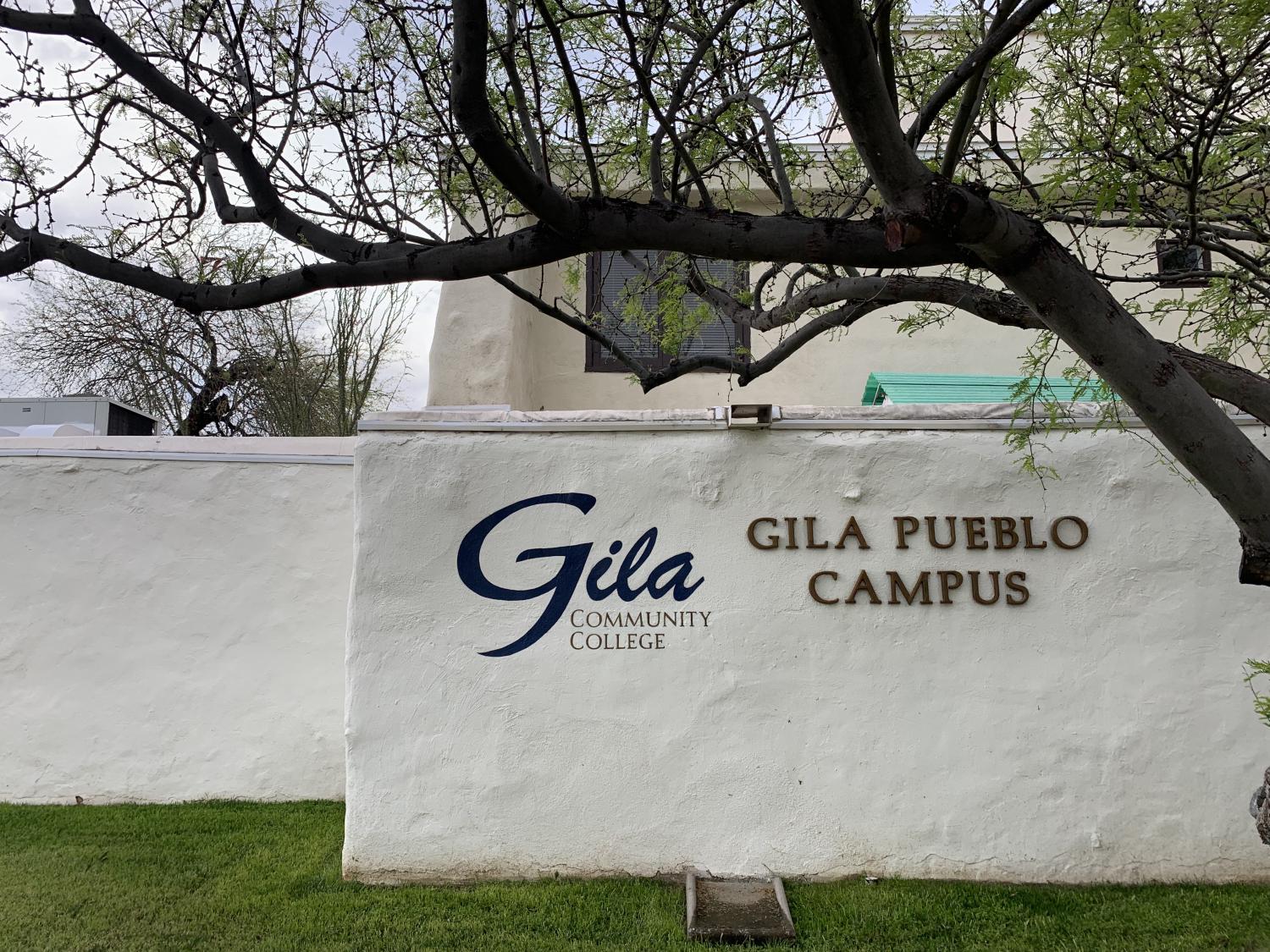