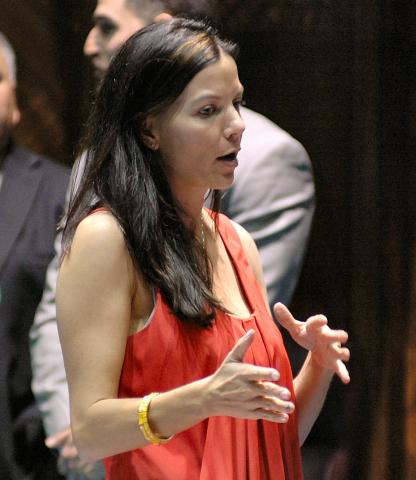 LAUREN GILGER: Arizona Gov. Doug Ducey has signed into law a third bill sponsored by Republican state Sen. Michelle Ugenti-Rita aimed at making changes to how elections are carried out in our state. The latest bill will restrict the use of emergency voting centers. It comes in response to Maricopa County Recorder Adrian Fontes's creation of five emergency voting centers in the last election, which some Republicans say didn't do enough to vet voters’ emergencies. The idea was to allow voters who can't show up at their polling place to cast a ballot ahead of Election Day. Now the legislature is giving the power to decide the location of emergency voting centers to the County Board of Supervisors and they're requiring voters to declare their emergency and explain why they otherwise would not be able to vote. Here to tell us more about why she pushed for this bill is Sen. Michelle Ugenti-Rita. Senator, good morning.

GILGER: So start by telling us a little bit about the motivation here. How much of this was about County Recorder Adrian Fontes' emergency voting centers he created last November?

UGENTI-RITA: Well look, a lot of the scrutiny on emergency voting centers came after Mr. Fontes abused the process and arbitrarily set them up in locations that people were not told about. So it led to the frustration from the public and ultimately led to a bill being passed to move that authority to the Board of Supervisors.

UGENTI-RITA: The problem was it was just random and arbitrary. He didn't involve the public in the decision making process. A lot of people didn't even realize you could utilize or we had the ability to operate emergency voting centers. And it's because of that that the people thought that he misused his authority. And now we've placed it in a much better spot with the Board of Supervisors, and they'll ultimately be able to decide whether they want to be used, where the location, the time and manner.

STEVE GOLDSTEIN: Senator, you know I have to ask this question. I apologize in advance. But, you are a Republican. Recorder Fontes is a Democrat. The majority of the county supervisors are Republicans. Has this become more of a political fight than an actual practical fight?

UGENTI-RITA: No, absolutely not. This is practical because the power now to administer these is going to be transferred from the recorder to the board of supervisors. There's 15 counties, and some counties have Democrat board of supervisors. So this isn't partisan politics. This is in response to someone who abused his authority and the public was frustrated and disappointed and the legislature had to take action.

GILGER: So why shouldn't the state and its counties allow early voting right up until Election Day? This sort of creates a couple days of a blackout period, right? Where you can't go and early vote.

UGENTI-RITA: No, it doesn't create a blackout period at all. Early voting ends the Friday before the Tuesday election. So there is that window. Inside that window, that Friday before that Tuesday election, you can elect, a county board supervisor now can elect, to use emergency voting centers, so those who have emergencies will be able to utilize them. If you don't have an emergency, you would simply vote day-of at the polling location. So this does not restrict anybody's ability to vote. We have multiple ways to vote in Arizona. What this does is this reasserts that you're supposed to be using emergency centers like they were intended — to facilitate individual voters’ emergencies.

GILGER: So you do not agree with, then, with critics who might say that this is another way to make it harder for voters to vote.

UGENTI-RITA: It's not that I want to be disagreeable with that sentiment. It's just factually — it’s incorrect. It's intellectually wrong. This does not interfere with anybody's ability to vote. Emergency centers or, is supposed to facilitate one's emergency. And that's what this bill addresses and makes sure that it's being utilized for its intended purpose. We didn't touch early voting. All of the early voting options remain the same and of course your day-of poll voting options remain the same. So it's just not accurate to say this restricts anyone's ability to vote.

GILGER: All right. That is state Sen. Michelle Ugenti-Rita. Thank you so much for joining us.

UGENTI-RITA: You got it, thank you. 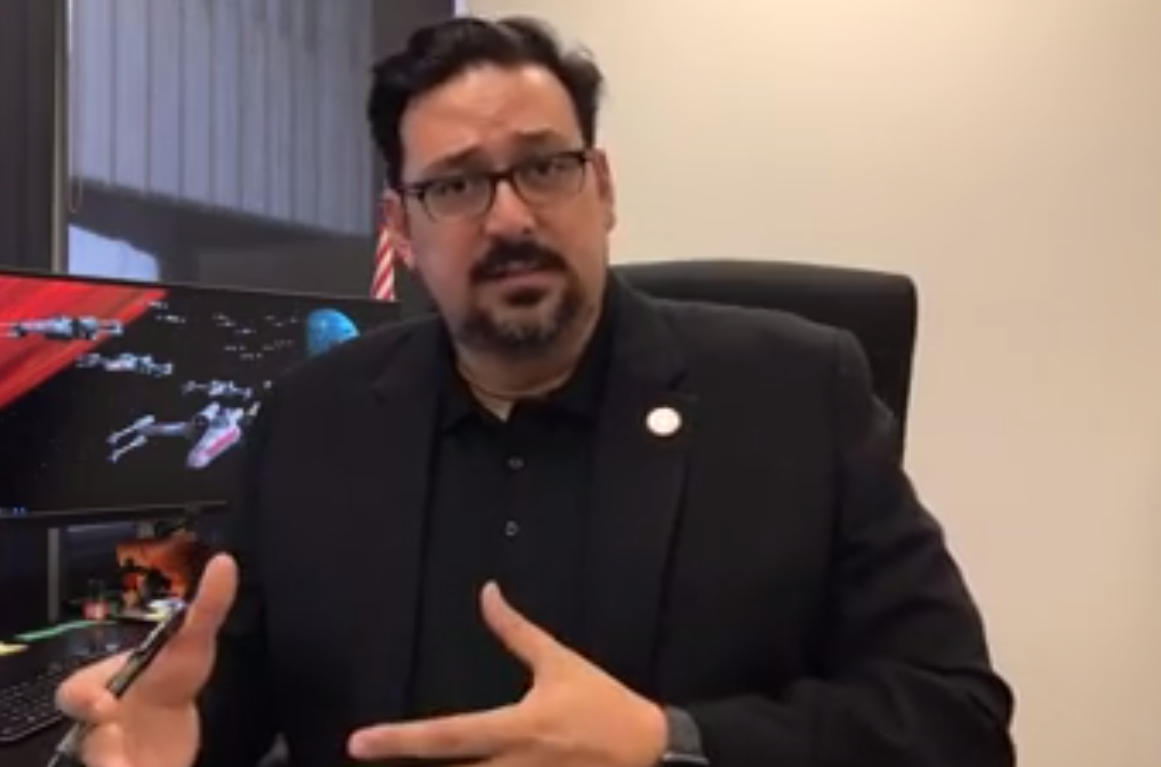 GOLDSTEIN: And now we turn to Maricopa County Recorder Adrian Fontes who joins us on the line. Mr. Fontes, Good morning.

ADRIAN FONTES: Good morning. How are you all doing today?

GOLDSTEIN: Doing well. So I have to ask you about a phrase that Sen. Ugenti-Rita used twice in our just-completed interview there — that you abused your authority. How would you respond to that?

FONTES: Well, I read the law and my lawyers were sitting there with me when we did it. And so, I frankly disagree. We have had the authority as county recorders in Arizona to support and provide for emergency voting as needed for voters across the state for decades and decades. And, you know, this bill, people forget, was completely unsupported and opposed frankly by the County Recorders’ Association and by the boards of supervisors across Arizona. So the stakeholders, the folks who are actually going to be impacted, the decision makers at the local level who actually run elections, felt that this was unnecessary. We all felt that this was something that should not happen and frankly, I think the governor even got a whole bunch of please-veto-this letters within the last several days. So yeah, I think there's something more to this than some folks would say.

GOLDSTEIN: I'm going to parse words on this one. What if they were not called emergency voting centers? Did that give the other side a chance to say well if someone just didn't decide to drop off their ballot that's not really an emergency? Did the wording causing any issues here?

FONTES: Let's go to what's actually going on here. The only reason we have this statute in place in the first instance is because these laws are designed around a technological time that doesn't exist anymore and that is, of course, we have robust early voting in Arizona, our voters love it. And we're going to keep it. And in the old days, when we had paper rosters to compare back and forth, county recorders needed time to adjust precinct by precinct those lists that would have gone out to the precincts. All of that happened on paper. Well, we use computers now. And so, you know, the question about whether or not we should extend early voting, the governor mentioned in his letter, his signing letter, it's a discussion that needs to be had. We're in a different technological period. So the idea that whether or not this is grounds for this or grounds for that, or whether or not we call it this or call it that, let's take a much more honest approach here. Let's take a step back. What can we do for voters? And, you know, last year, let's not forget — the Arizona state Senate 29-0 passed a bill that would have allowed early voting to extend past Friday through the weekend, as long as the county recorders update their rolls appropriately for Election Day. That's what this part is about. So you know I want to make sure that voters get a chance to vote when they want to vote. And if it happens to be that they can't come in on Election Day Tuesday because of an emergency, the law allows for that and recourse around the state has been providing this for decades, so I don't know why suddenly it's a big deal.

GILGER: Recorder Fontes, were there some issues you think with the way that you rolled out these five early emergency voting centers last time around? Do you think that there's something there and that maybe it should have been done a different way?

FONTES: No. I do think that the only issue is that the Maricopa County Republicans wanted to play games with the whole way that we administered elections, and they were trying to find some hole and they decided that they wanted to attack me, and it has been very plain. People know that this only came up because, unlike my predecessor, I announced to the world that if you couldn't make it on Tuesday, you could come in and vote over the weekend. You could come in because you had something that would not allow you to vote on Tuesday — a law that was well-established, has been utilized in Arizona for years and years and years. And, you know, in other counties, I've talked to recorders — Republican recorders — that their offices used to post on the door, “If you have an emergency, call this number.” And they decided they should be open on the weekend so they changed their policy to be open on the weekend before Election Day. This is not new, it's not unusual. It's just an opportunity for folks to play politics in ways that all the recorders and all the boards in Arizona disagree with. So, you know, and plus, here's the other thing. Maricopa County has had an increase of about 500,000 voters over the last several decades. We've got a lot of people with a lot of circumstances, and those circumstances are up to them to decide. This is about access for voters who might have something unusual pop up. And I wanted to give them access, but I guess some folks disagree with that.

GILGER: All right. That's Maricopa County Recorder Adrian Fontes. Thank you so much for joining us.

FONTES: Thanks for having me. Appreciate it.