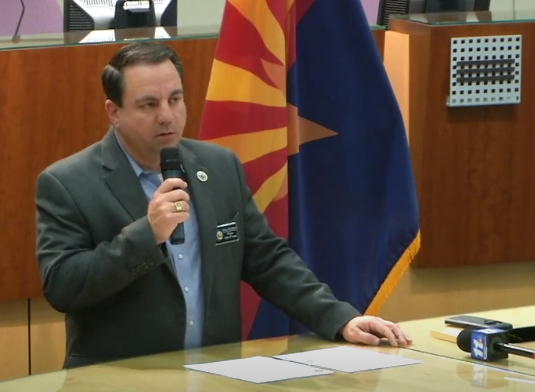 A flood of migrants dropped off in Yuma by the U.S. Department of Homeland Security has caused city’s top elected official to declare a local emergency.

Yuma Mayor Douglas Nicholls suggested an agency within the same federal department should pay for the “disaster.”

While announcing the emergency declaration, Nicholls said he hopes other cities join him. The local shelter was already packed with migrants Tuesday morning. Then Nicholls said he heard two more drop-offs were scheduled for later on.

Nicholls also said he’s looking for federal funding, and a “FEMA-like response,” which is the acronym for the Federal Emergency Management Agency.

“So it is with a heavy heart that I declare we are at this point, but it is something that I believe we need to do to make sure our community is maintained. And that the human rights of all the migrants are also maintained. And that we have a path that respects both,” Nicholls said.

Kim Johnson, reporter for KAWC in Yuma, spoke to KJZZ's The Show and began by sharing how many migrants have recently come to the city.