Download mp3 (12.52 MB)
Supported by AARP of Arizona
Kathy Ritchie/KJZZ
Several beds line the walls and floor at Central Arizona Shelter Services (CASS) in Phoenix. This is the women's dormitory.

More and more women are growing old poor. That’s according to a report by the national advocacy group Justice in Aging. In Phoenix, the reasons why mirror what’s happening nationally.

Lisa Glow is the CEO of Central Arizona Shelter Services (CASS). She takes me on a tour of the facility, which feels more like a gymnasium.

"So, we’re walking into the women’s shelter where we have 120 beds that are always full," she said. "And it’s an emergency shelter, so it’s meant to be temporary as we help them get a permanent home and address all of the issues that may have brought them into homelessness."

Glow says nearly a third of those served at CASS last year, were people 55 and older — including many in their 70s and 80s. It's a trend, she said, that's on the rise. 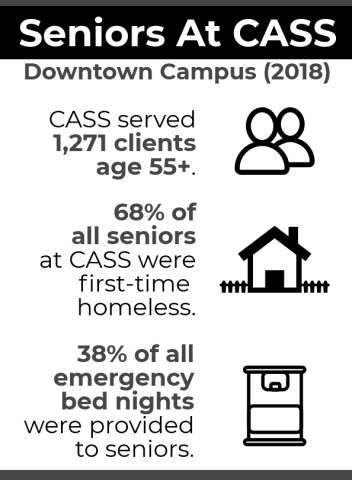 "By the way, 73 percent of the women, the elderly women 55 and older staying at our shelter, are first-time homeless."

Erin, who asked that I not use her last name, had never experienced homelessness before. But after a series of personal losses, including the death of her brother, Erin slipped into a depression and couldn’t function, she says.

Then she lost her job as a business analyst.

"And I used the money in retirement to survive, thinking I could get another job, and it hasn’t worked out," she said.

"I always assumed it was drug addicts or just people that were the lower part of our society. But it’s not. There’s a lot of just everyday hardworking people here and it really surprised me," she told me.

Glow echoed her observations. Many of the people at CASS would have told you what Erin told me — that it could never happen to them, but it doesn't take much to lose everything, a medical crisis, a job loss. And that means anyone, you, your co-worker, your neighbor could end up homeless and at a place like CASS.

And many Arizonans are already one paycheck away from homelessness.

Kevin Prindiville is the executive director of the national organization Justice in Aging. His organization released a study called "Older Women in Poverty."

"Yeah, so we’re seeing a very disturbing trend of individuals that lived middle-class lifestyles when they were working age, becoming poor for the first time when they’re older — and that’s a shift."

And he attributes that shift to a culmination of factors that tend to affect women more than men.

"It starts with a difference in education and employment opportunities. Women are often tracked into careers and professions that pay a lower wage than professions that men are more likely to be in."

In 2018, women earned 85 percent of what men earned, according to the Pew Research Center, which analyzed median hourly pay of full- and part-time workers.

Domestic violence is also a factor. So is a change in relationship status — like a divorce or death — which can have significant financial implications especially if her partner was the breadwinner.

Women of color and LGBTQ women are also disproportionately affected. Prindiville said it's a reflection of the inequities in our system.

And then there’s the "motherhood penalty," a term used to describe the challenges some working mothers encounter compared to their childless colleagues. In this case, Prindiville is talking about the pay gap.

"So, lifetime earnings of mother with a child are 28 percent less than the earnings of a woman that doesn’t have a child. And that’s compounded if a woman has additional children."

"We’re seeing a very disturbing trend of individuals that lived middle-class lifestyles when they were working age, becoming poor for the first time when they’re older — and that’s a shift."
— Kevin Prindiville, Justice in Aging

"And most of the child-rearing costs are on the women," said Darlene Newsom. She’s the CEO of UMOM, the state’s largest provider of homeless services.

She says about 70 percent of the women at UMOM are single moms.

"And their average income when they come into the emergency shelter is $6,000 or less in a year."

I ask Newsom, if a woman is living on the brink in her 20s, 30s or 40s, can she ever recover? Or is she destined to be one of the more than 4 million women, 65 and older who are living at or below the poverty line?

"I think that you could recover if there are other opportunities available — if you have health care costs covered, if you have affordable housing covered and if you are receiving a livable wage."

And that’s the problem, she says. Minimum wage is still low and if you’re single mom with children, it can be very hard to get ahead of the game — let alone save for retirement. Poverty and homelessness can become generational.

Newsom tells me that for young children, becoming homeless is devastating. She says many of them develop long-term health issues, like asthma. 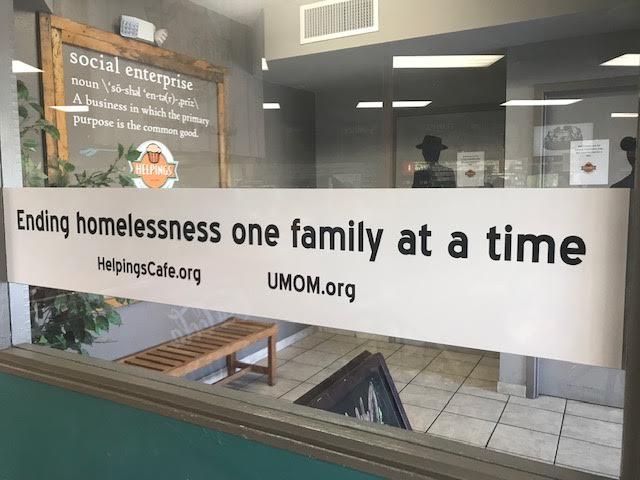 Kathy Ritchie/KJZZ
One in four homeless individuals on the street is a woman, says UMOM's CEO Darlene Newsom.

Back at CASS, Lisa Glow says something that hits a nerve. She tells me that some of the people who come here have dementia.

"We’re not equipped to deal with all of that," she tells me. "We’re not funded for that. So, just think about someone who’s sleeping on the streets who has dementia. That’s the reality that we’re facing."

Since this interview, Glow has hired case managers to work with their growing senior population. The Justice in Aging report did include several recommendations that would strengthen existing supports and programs — like expanding 401(k) participation to part-time employees, enacting paid leave policies and improving access to programs like SNAP.