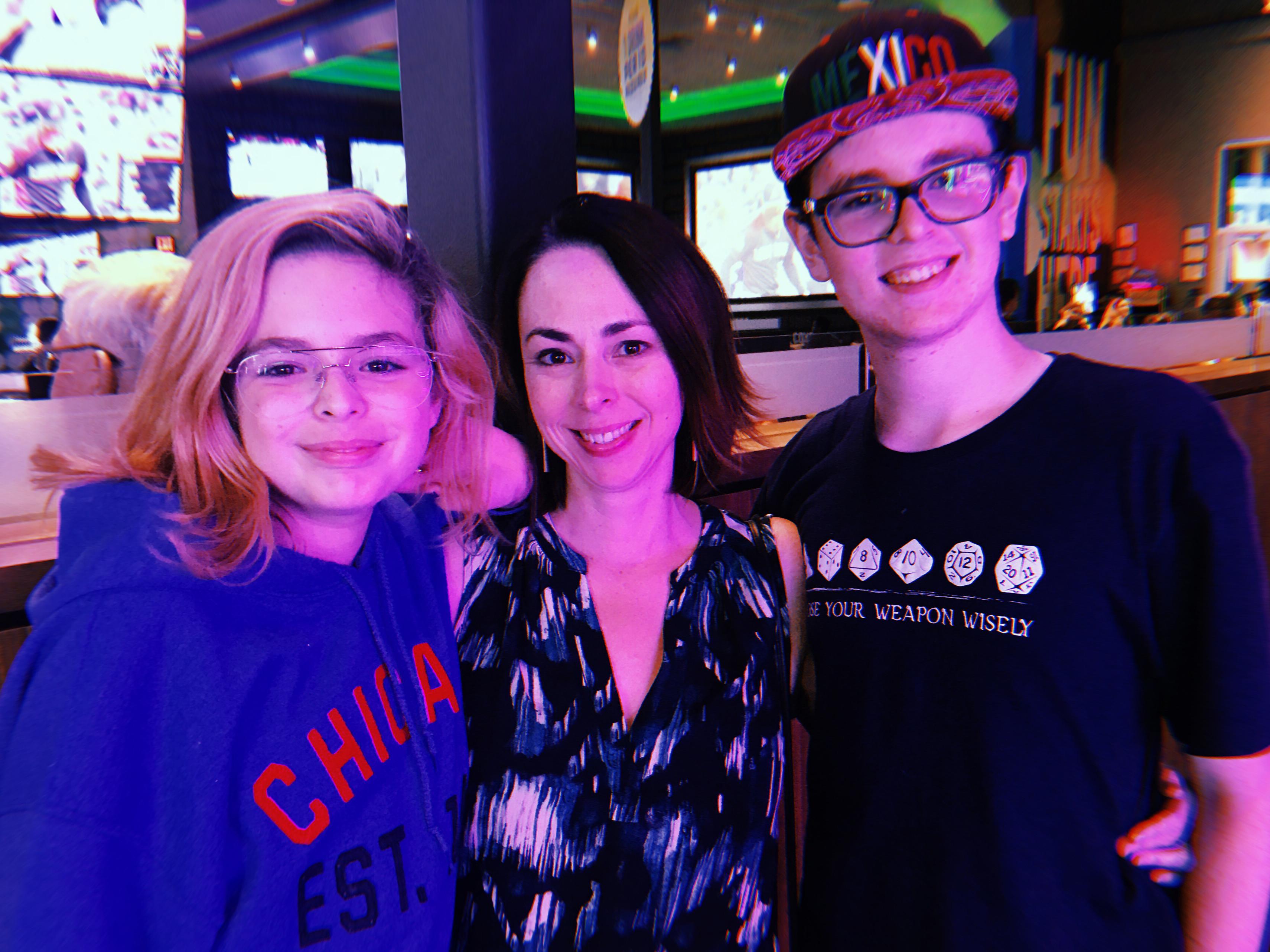 Carol Brochin called her child, Santi, who was home sick from school, to tell them the big news.

“Oh my God! The governor signed the law!” she remembered yelling into the phone. “Santi was so surprised and really taken aback and started crying actually.”

Santi is plaintiff S.C. in a lawsuit filed last month against Arizona education leaders over a law that restricts how LGBTQ relationships can be talked about in school health classes. KJZZ is using their real name at Brochin and Santi’s request.

Santi uses they/them pronouns and identifies as queer and in the lawsuit describes how as result they’ve been bullied at school.

That lawsuit built on years of effort by Arizona Democrats and LGBTQ advocates to repeal what some call the “no promo homo” law because it specifically prohibited teachers from promoting a “homosexual lifestyle” in HIV/AIDS Instruction.

In a whirlwind 24 hours this week, the Arizona House and Senate voted on a repeal and Gov. Doug Ducey signed it into law.

“We're so excited and relieved and, I think, in a state of shock, to be honest,” Brochin said.

A Swift And Unexpected Victory

Mariana Dale/KJZZ
“Today we send a signal to Arizona’s LGBTQ students, educators and families that says no matter who you are or who you love, you are welcome and we are proud to have you in our school,” Superintendent Kathy Hoffman said.

The defendants were the Arizona State Board of Education and Superintendent Kathy Hoffman.

Santi is a Mexican-American seventh-grader at a Tucson middle school. Brochin said sometimes they describe themselves as Latinx or Chicanx.

They love to knit (mostly beanies and scarves right now), play the video game Minecraft and experiment with makeup.

“They are the emotional center for their friends,” Brochin said. She thinks it’s because of how much Santi has been through.

The complaint describes how in sixth grade, Santi was called a “stupid gay kid” and “faggot” by other students, did not feel safe at school and frequently escaped to the nurse’s office to avoid bullying. Santi transferred to a charter school, but in a few years plans to be back at a Tucson public high school.

“Because they will take curriculum subject to the anti-LGBTQ curriculum law in high school, S.C. will face further stigma and will be denied equal education opportunities because of the law.”

Brochin prepared Santi for a legal battle that could last for years. 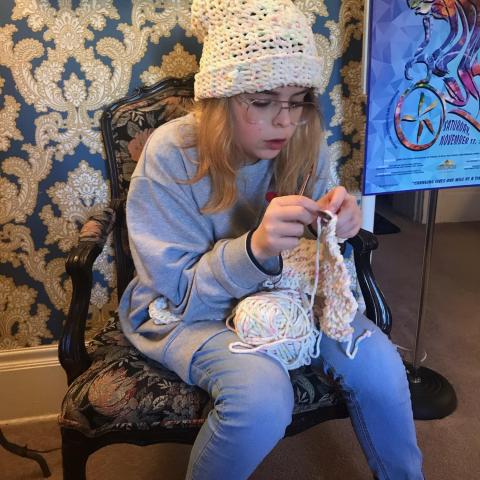 Carol Brochin
Santi is a Mexican-American seventh-grader at a Tucson middle school who loves to knit, play the video game Minecraft and experiment with makeup.

“A fear around that is that religious organization could identify who we are and be hostile toward my kids,” Brochin. “We have heard a lot of comments that LGBTQ kids are not normal. Our family is not normal.”

“I think when you prepare for worst case scenario...when it comes swift and unexpected it's a victory,” Brochin said. ‘And it's kind of like surprising to take it in.”

The repeal effectively ends the lawsuit.

Brochin said she doesn’t expect all bullying of LGBTQ students will go away completely, but she’s hopeful for the changes that could come to Arizona schools.

“Hopefully this is the beginning of a long journey to making schools in Arizona more inclusive for all of our kids,” Brochin said.

'Today We Send A Signal'

At 2 p.m. on Thursday a group of LGBTQ lawmakers, supportive colleagues and advocates gathered the Capitol Rose Garden for a press conference.

The cheers were frequent and there were rainbows everywhere— in tattoos, on pins, shirts and even in the pattern of an umbrella.

“Today we send a signal to Arizona’s LGBTQ students, educators and families that says no matter who you are or who you love, you are welcome and we are proud to have you in our school,” Hoffman said.

Hoffman had said she welcomed the lawsuit. Repealing the LGBTQ curriculum law was one of the top priorities she outlined in her State of Education speech in February.

“I hope that school districts will look at all their policies and laws in how to make their school districts more inclusive,” Hoffman said. Districts and charter boards have the power to change curriculum. Several in Arizona were already in the process of re-evaluating their sex education policies. 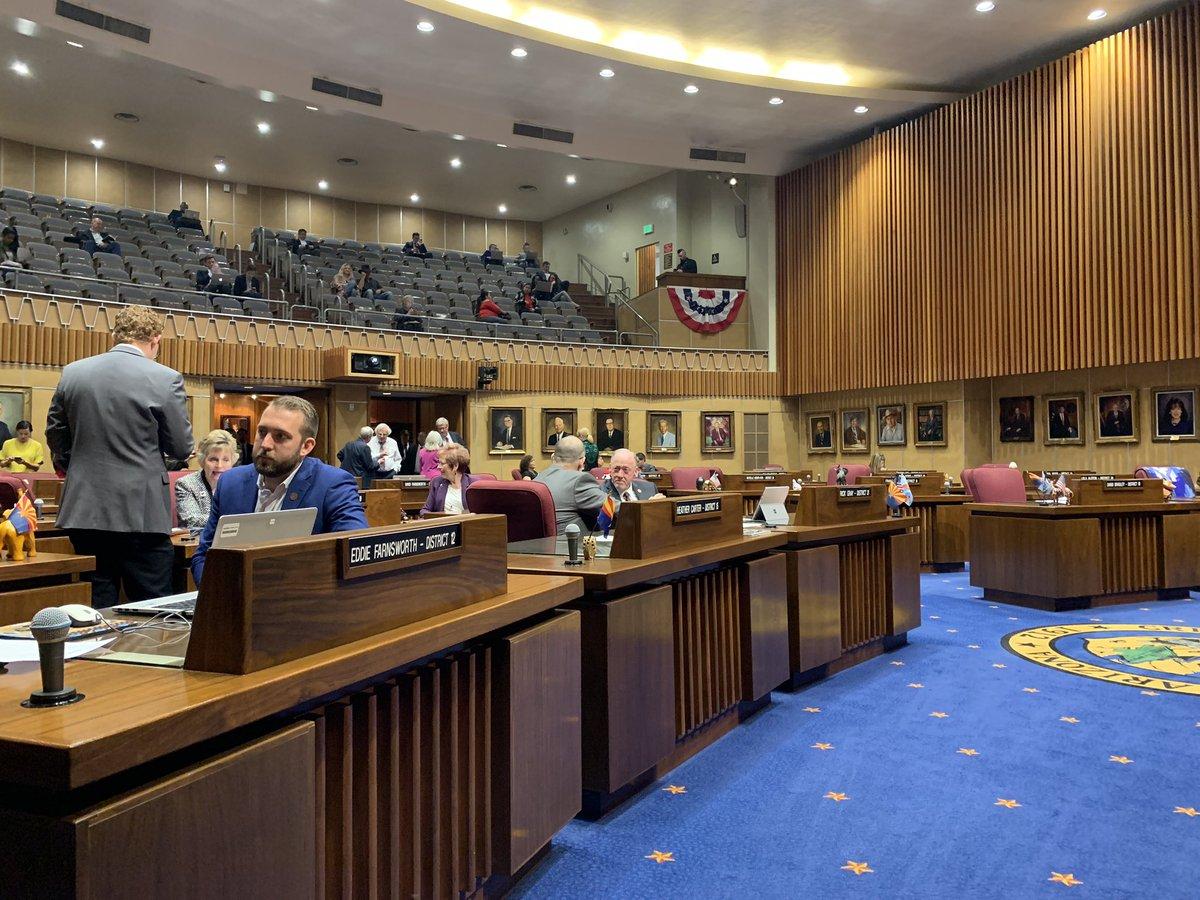 Mariana Dale/KJZZ
The view from the Arizona Senate floor on April 11, 2019.

There’s a hope these new policies could help combat the increasing number of HIV cases in Arizona.

U.S. Health and Human Services reported earlier this year Maricopa County is one of 48 counties with the highest number of new HIV diagnoses.

“This is really important, the idea that we can now start working with school districts to educate our kids about HIV, about healthy sexual relationships,” said Glen Spencer, executive director of Aunt Rita’s Foundation, an organization focused on eliminating HIV/AIDS.

Arizona has other laws that set out boundaries for how sex education can be taught, including that it must be medically accurate, promote abstinence and parents must opt-in their children.

This mean if the Legislature chose to defend the law they would likely have to hire outside counsel.

Wednesday, April 10: 11:31 a.m. The director of communications for the Arizona House of Representatives emails an amendment to an existing education bill that strikes the five specific lines from Arizona statute.

15-716
C. No district shall include in its course of study instruction which:

2 p.m. The Arizona House of Representatives convenes a floor session, among the bills is SB1346. Republican Rep. T.J. Shope from Pinal County proposes the amendment to get rid of the LGBTQ curriculum statute.

“This amendment, Madame Chair resolves issues in a recently filed lawsuit, allows the state to move forward and save taxpayer money that would otherwise go to paying lawyers,” Shope said in explaining the amendment.

Today's vote to repeal a 1991 policy that forbids K-12 schools from promoting a "homosexual lifestyle" was long overdue. Here are my comments from Arizona's House Floor. pic.twitter.com/17c1ENnHgn

Several lawmakers who voted yes explained their votes. Among them,  Rep. Daniel Hernandez is a Democrat from Tucson, who’s gay.

“For me, it’s a really important win today to be able to have this because the struggles and the challenges I went through in our public schools where I was labeled as alternative, labeled as an other, will be going away today, ” Hernandez said.

Hernandez served as a governing board member in the Sunnyside Unified School District from 2012 to January 2019. He said the consequences of the law reached beyond health classes.

“A lot of school districts over interpreted the statue. … [T]o say you couldn’t even talk about the LGBTQ community because even a mere mention could be perceived as going and promoting it and because they were afraid of lawsuits and afraid of complaints, they just wouldn’t even touch the  subject,” Hernandez said

The amended bill, which originated in the Senate, is transmitted back to that chamber for consideration.

10 a.m. The Senate briefly convened on the floor before recessing so bills can be considered in caucus. Sen. Sylvia Allen concurs with the changes to SB1346, which was originally her bill and also alters the state’s plan to offer a menu of school assessments.

10:23 a.m. KJZZ talked to Cathi Herrod in the hallway outside the caucus room. Herrod is the president of the conservative Center for Arizona Policy. Herrod and her organization, until this week, had supported keeping the law’s language around homosexuality the same.

“The contested provisions that are being removed today...we did not see a need to remove those, but given the dynamics today we believe that it’s OK to remove them because the main core of the law will remain intact,” Herrod said.  She emphasized the instruction must still be medically accurate and age-appropriate.

11:24 a.m. In a 19-10 votes with one Senator absent, the chamber passes the amended bill repealing the LGBTQ curriculum law.

Like the House vote Thursdau, legislators who are LGBTQ or connected to that community spoke about how their experiences informed their votes.

Democratic Sen. Victoria Steele from Tucson says her son came out as gay when he was 14-years-old and started his high school’s first Gay Straight Alliance club.

“I was so proud of him,” Steele said. “And then quickly he was abused. He was bullied at school and his teachers, they couldn’t protect him and they didn’t.”

Democratic Sen. Martín Quezada had tried to repeal the law every year since 2016 by sponsoring a bill with language almost identical to what he voted on Thursday.

“I want us to all be honest with ourselves today about this bill,” Quezada said. “We would not be here today if it was not a forced issue.”

Sen. Sylvia Allen blocked Quezada's bill from advancing as chair of the Senate Education Committee and on the floor voted no on her own bill because of the amendment. She said schools have changed from being a neutral place where children can learn.

“Every single year because society is having problems, then we’ve got have to bring it into our school to solve those problems with our children,” Allen said explaining her philosophy about education. “I don’t know that schools the place to solve some of these problems.”

11:35 a.m. Gov. Doug Ducey tweets that he has signed SB 1346, erasing the law banning the promotion of a “homosexual lifestyle” in school health classes.

Arizona was one of at least seven states with curriculum laws around LGBTQ issues, according to the advocacy group GLSEN.

The Arizona law regulated HIV/AIDS instruction in public schools. It banned teachers in those courses from portraying "homosexuality as a positive alternative life-style" or suggesting there are safe ways to have homosexual sex.

Like many of the laws in other states, Arizona's was created in the throes of the HIV/AIDS epidemic, and after a 1986 recommendation from the U.S. surgeon general that HIV/AIDS education start at an early age.

The Arizona Capitol Times reported Republicans amended the bill creating an AIDS education law with the language around homosexuality.

"Rather than opposing it, they began to say, 'Well, if we're going to teach teenagers about HIV, then we have to make sure that we're not teaching them how to be gay or how to have gay sex or things like that,' " said Clifford Rosky, a University of Utah law professor Clifford Rosky who has researched these types of laws across the country and was an attorney in the Arizona lawsuit.

While Arizona's law was technically limited to HIV/AIDS education, in practice it was applied more broadly.

The Tucson district tried to pass a new sex ed policy that was more inclusive in 2016, but was  advised that they risked violating the law.

"Teenagers ask questions and they ask a lot of questions," Harvey said. If they ask if he has a boyfriend, the answer is yes.

Still, Harvey believes Arizona's law contributed to an environment where LGBTQ teachers felt like they have to be cautious.