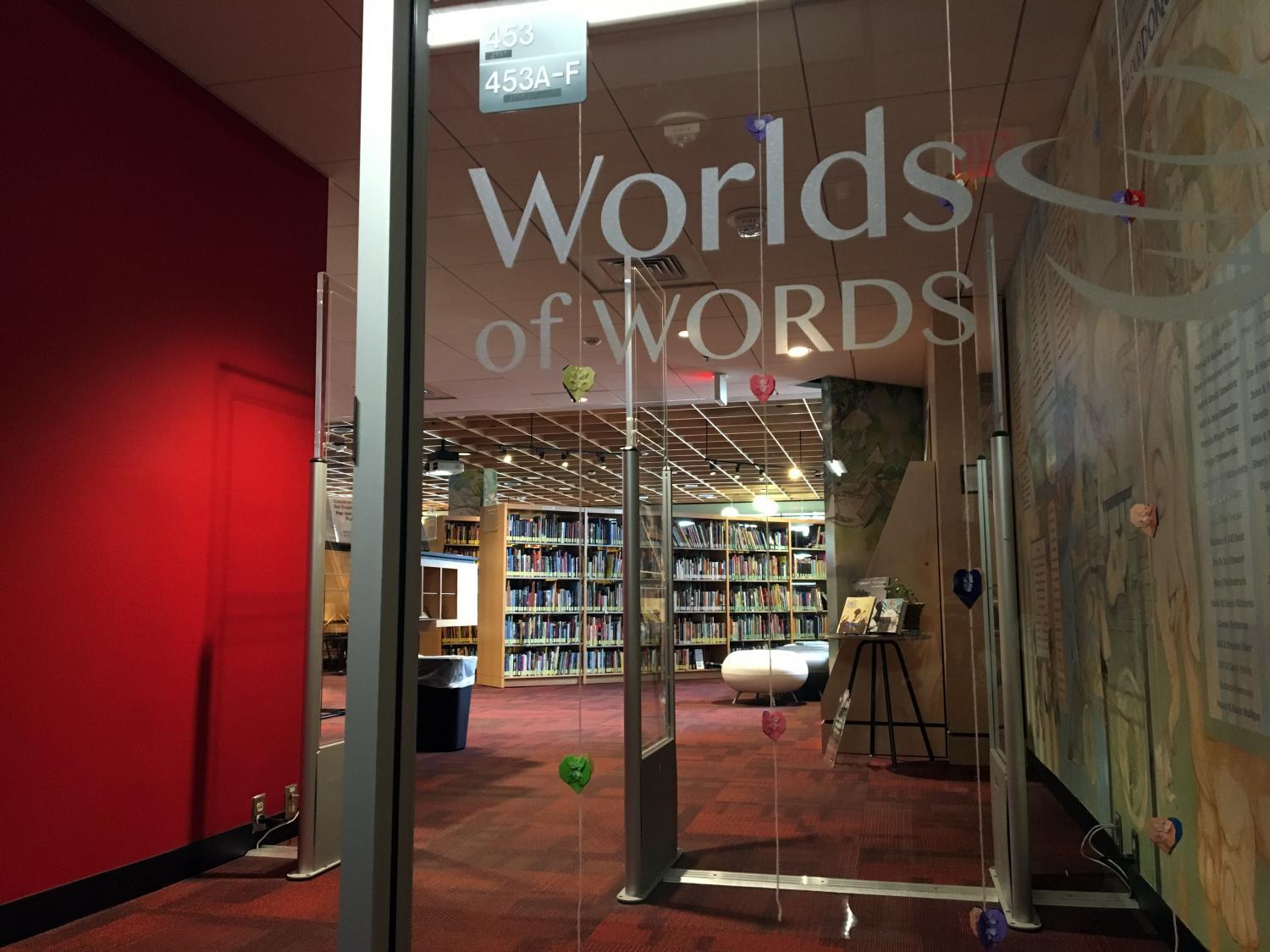 Mariana Dale/KJZZ
The collection moved out of the basement into the fourth floor of the education building in 2014.

The gray plastic crate in front of me just arrived in Tucson from Basel, Switzerland.

Inside there are dozens of picture books from around the world.

Kathy G. Short pulls out one with an orange and yellow cover. It’s from Egypt and there’s an image of a sun tucked into the Arabic title.

The book will join more than 40,000 others in the Worlds of Words collection housed on the fourth floor of the College of Education. It’s the largest collection of global children’s literature in the country and the second largest in the world. Global meaning most of the books are published in the U.S., but the stories focus on another country.

“We’re trying to really highlight either books that have won awards or books that feature groups that have been misrepresented or underrepresented,” said Short, a professor at the College of Education and the founder and director of the collection. 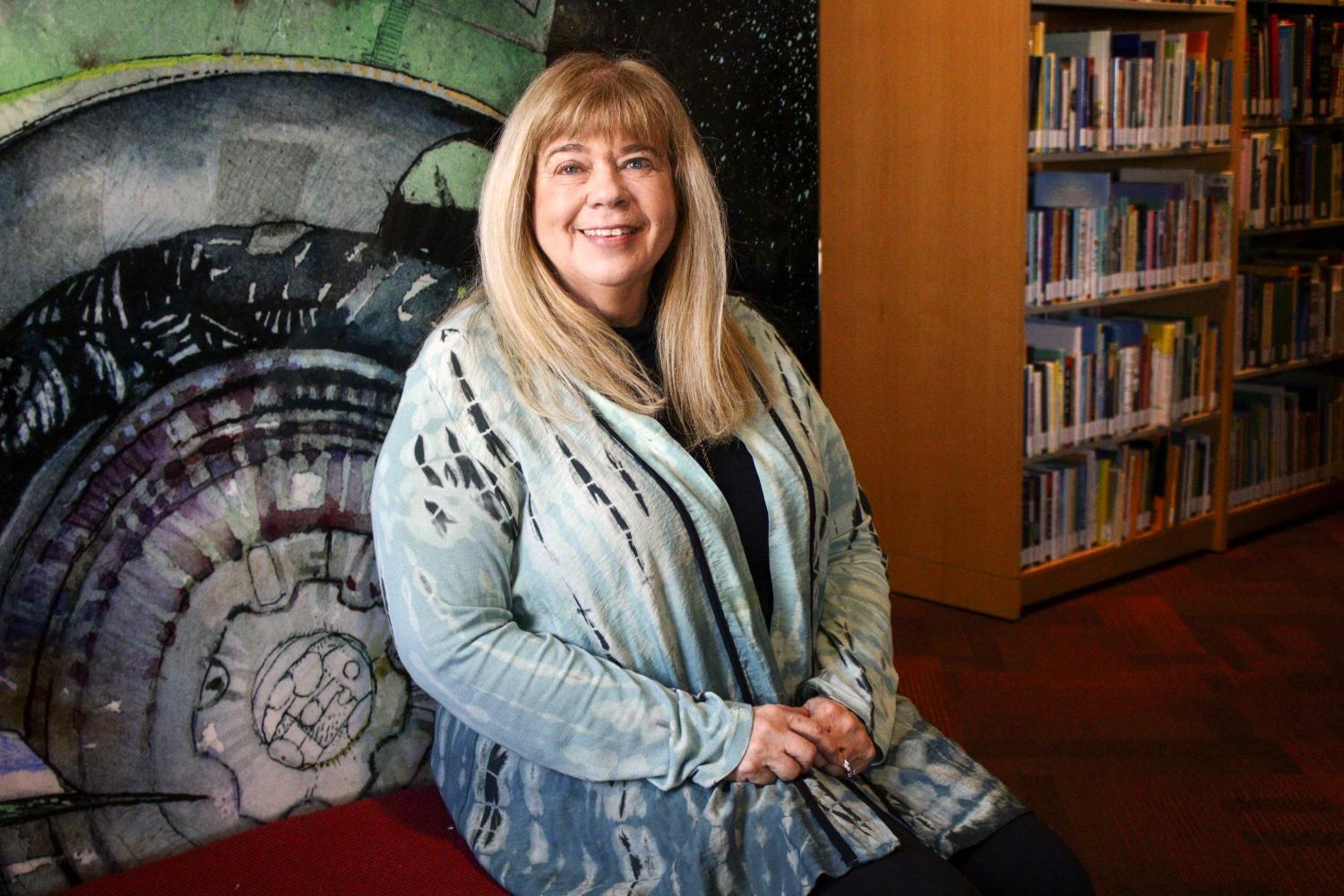 Mariana Dale/KJZZ
Kathy Short moved to Tucson and took a job at the University of Arizona in 1989 and her books came with her.

Books were an escape — figuratively and sometimes literally for her four younger brothers.

She’d cut through the cornfield behind her house to a tree hidden in the middle to read.

“For me it was a way of being able to dream beyond my own circumstances,” Short said.

Her parents did not graduate from high school and no one in her immediate family went to college.

“So that vision of who and what I could be was pretty limited,” Short said.  She said the options at the time were to become a nurse, secretary or teacher.

“I fainted at the sight of blood. I was not interested in being a secretary and so that left being a teacher,” Short said.

In the classroom, books became a tool to teach students to read and write their own stories.

“My passion was really books,” Short said. “Not so much books as separate from kids, but the power of connecting children with books and what happens within those experiences.”

She pursued graduate and doctoral degrees and in 1989 she accepted an assistant professor position specializing in youth literature at the University of Arizona. 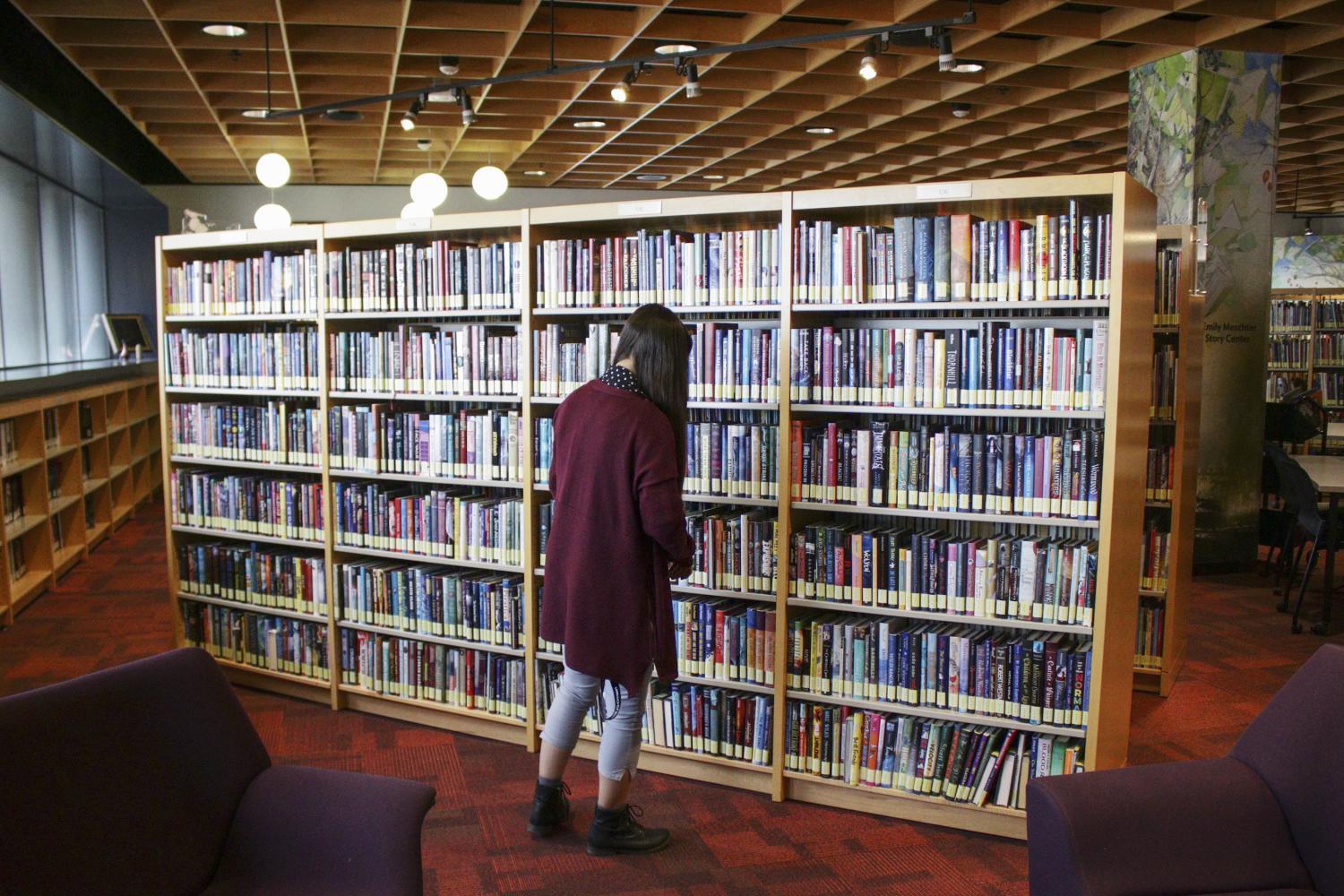 Mariana Dale/KJZZ
“Seeing that there’s more and more people like me and other people that don’t fit the usual white straight cis kind of box-- it’s great to see that these are becoming more normalized in the world,” Adamson said.

The book collection she started in her classroom came too. Short estimated she shipped maybe 100 cardboard boxes of paperback books. More precious hardbacks came across the country in the moving truck.

The closet the school has set aside for her was not nearly large enough.

“I’m like, you’re hiring a children’s literature person. What do you expect? I come with books.”

The cardboard box collection grew and eventually ended up in the basement after a colleague wondered whether the buildings floor could stand the weight.

Short said the “dungeon” was a popular stop for visitors to the college. So, she and her colleagues fund-raised for a light-filled space on the fourth floor of the education building.

Colorful shades illustrated like book pages sprout from the windows and are visible from the street.

The collection of more than 40,000 global books is only second in size to the International Youth Library in Munich, Germany.

"It is also located in a castle in a moat which we can't quite compare with," Short said, as she laughed.

Still the Worlds of Words hosts authors and illustrators for events, is a training ground for teachers to learn how to use more diverse literature in their classrooms and has a studio for artists.

Short and her husband last year made a $1 million gift to help ensure the future of the Worlds of Words collection by endowing the director’s position she now holds.

"It's so much more than a book collection you know,” Short said.

On a Saturday in February, a group of high school “reading ambassadors” gather for a meeting.

Among the chatter I overhear: "The Great Gatsby" didn’t impress and feminist pop punk is cool.

But the teens fall silent as they open "Cicada," a new-to-the U.S. picture book by an Australian Shaun Tan.

“It’s so dark,” Pilar Muller whispers as she turned a page.

Though there are just a few words on each page, the book explores deep topics, like the feeling of being alienated at work. As soon as they finish the book, the volume in the room goes back up.

“This is a book that I would never even see that I wouldn’t know existed if I didn’t come here,” Muller said.

Someone asked, "Has he done other books?"

"Oh, has he ever! Do you want me to go pull them?" said Rebecca Ballenger, coordinator of outreach and collections at Worlds of Words.

She hustles off to the Oceania and Australia section of the collection.

Today, 28 percent of children’s books published in the United States feature a character of color. 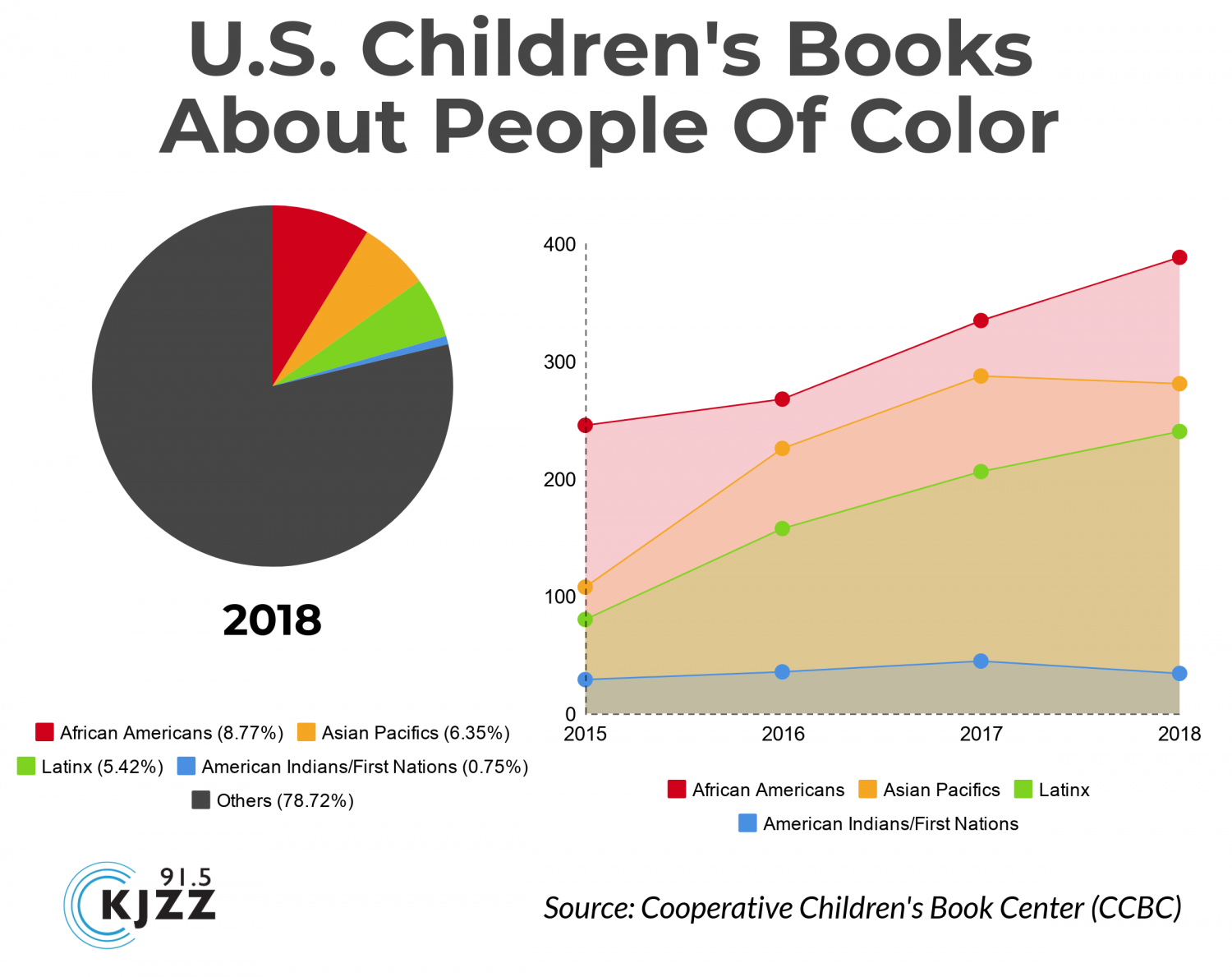 That’s double what it was even a few years ago according to the Cooperative Children’s Book Center at the University of Wisconsin-Madison which tracks the numbers.

For college student, Aika Adamson that means she didn’t see her experience as half-Japanese and  half-Okinawan in the books she read growing up.

“You start to think that you don’t have any place in these happy magical worlds,” Adamson said.

She remembered when she was 8 years old, kids at school made fun of the traditional Japanese foods she brought for lunch.

“They’d make a big deal of like moving to a different table saying how my food stinks,” Adamson said.

She wondered if  they knew more about her culture they’d have acted differently.

Now Adamson is a student worker at the Worlds of Words, surrounded by diverse books.

“Seeing that there’s more and more people like me and other people that don’t fit the usual white, straight, cis, kind of box-- It’s great to see that these are becoming more normalized in the world,” Adamson said.

One of her favorites right now is “The Inexplicable Logic of My Life” by Benjamin Alire Sáenz. It's in the "Latinos in the U.S." section.

"All his books are written with so much love that even when all these characters are going through such dark and horrible times, you know that things will be fine,” Adamson said. “The author loves them so much that you can just feel it."

'A Window Out Onto The World'

Books can be a mirror where children can see themselves. For Kathy Short, they were something different.

“Books for me were a way to, a window out onto the world,” Short said. “They weren’t just a mirror. They were what allowed me to envision something different for my life.”

She’s traveled the world in books. It’s a joy, Short said, but it’s also made her life less comfortable.

She recently read "The Fox on the Swing," a Lithuanian tale of friendship between a boy and a fox that dips into philosophy.

“In many ways, being able to host another person's point of view through openness and through not making judgement is, really does add to life," Short said. 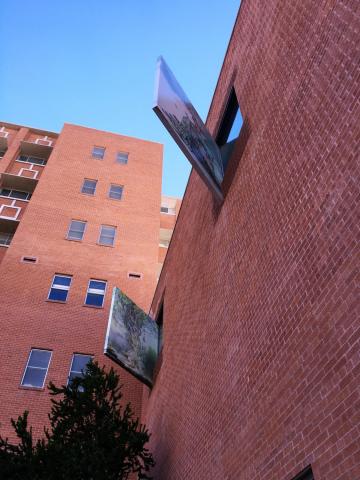 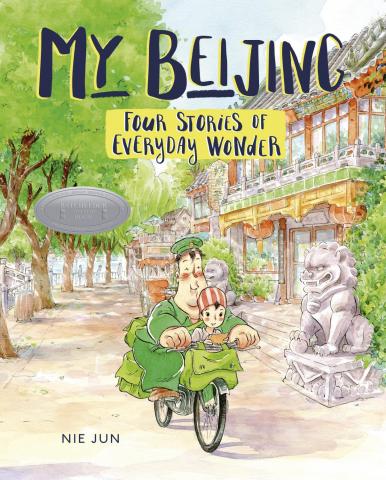 Lerner Publishing Group
"My Beijing" by Jun Nie is "a graphic novel about a girl with limited mobility," Short said. "It’s really about the wonder and magic of the everyday world.” 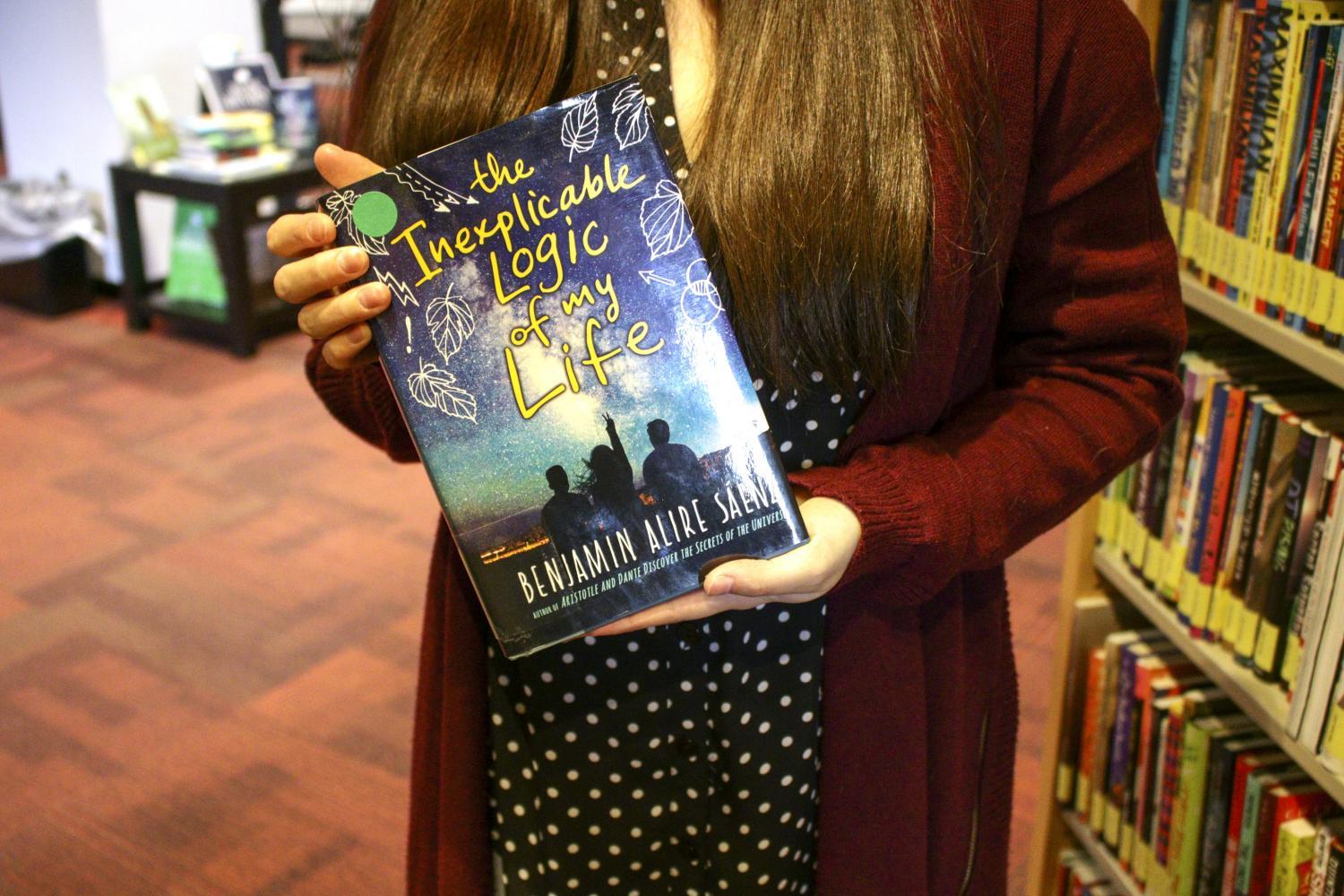 Mariana Dale/KJZZ
"All his books are written with so much love that even when all these characters are going through such dark and horrible times you know that things will be fine," said Adamson of Benjamin Alire Sáenz's books, including The Inexplicable Logic Of My Life. 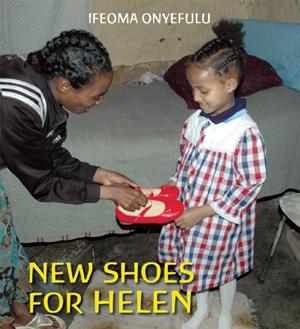 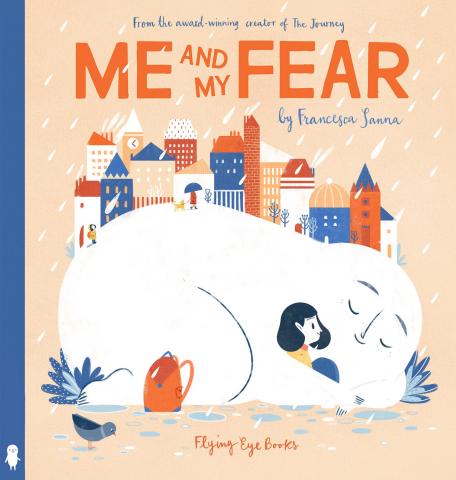 Nobrow Inc./Flying Eye Books
"Me and My Fear." 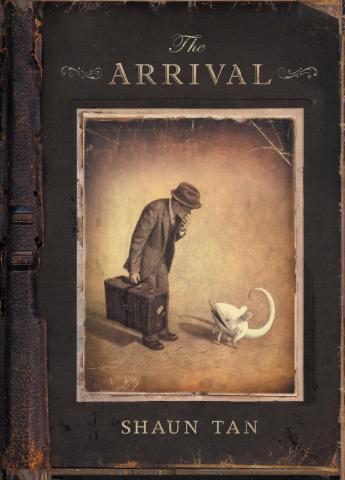 Scholastic
"The Arrival" by Australian Shaun Tan is a wordless graphic novel. "He made the illustrations, but you get to interpret them," said Rebecca Ballenger.
minedition
"Marwan's Journey" is one of an influx of children's books about refugees. 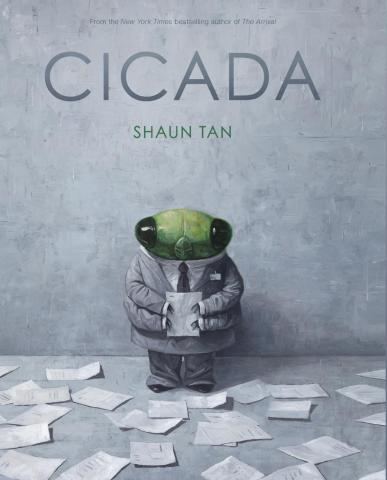 Scholastic
“This is a book that I would never even see that I wouldn’t know existed if I didn’t come here," said Pilar Muller about Cicada. 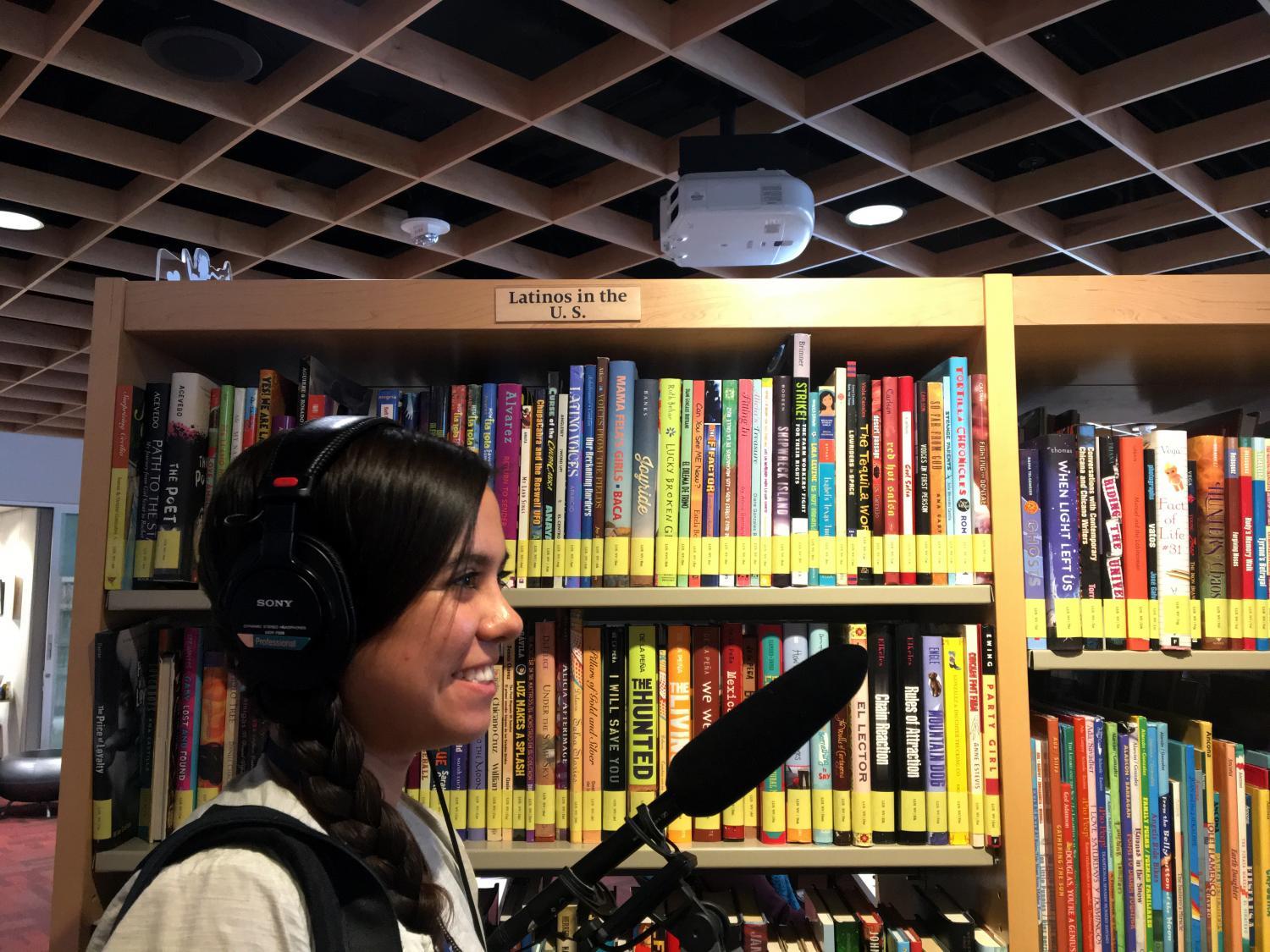 Mariana Dale/KJZZ
Hunting for sound in the Worlds of Words. 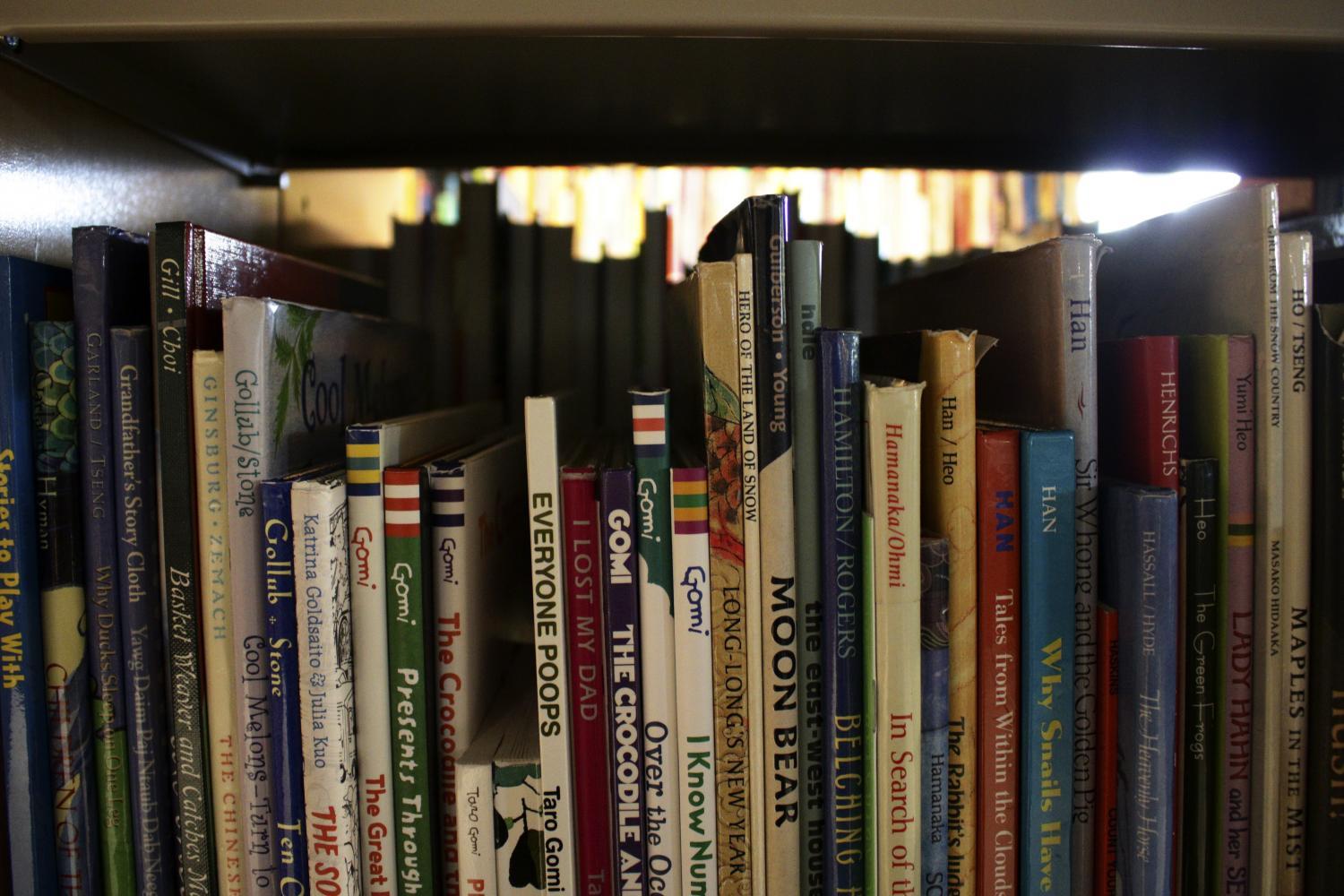 Mariana Dale/KJZZ
There are more than 40,000 books in the collection featuring stories that take place around the world. 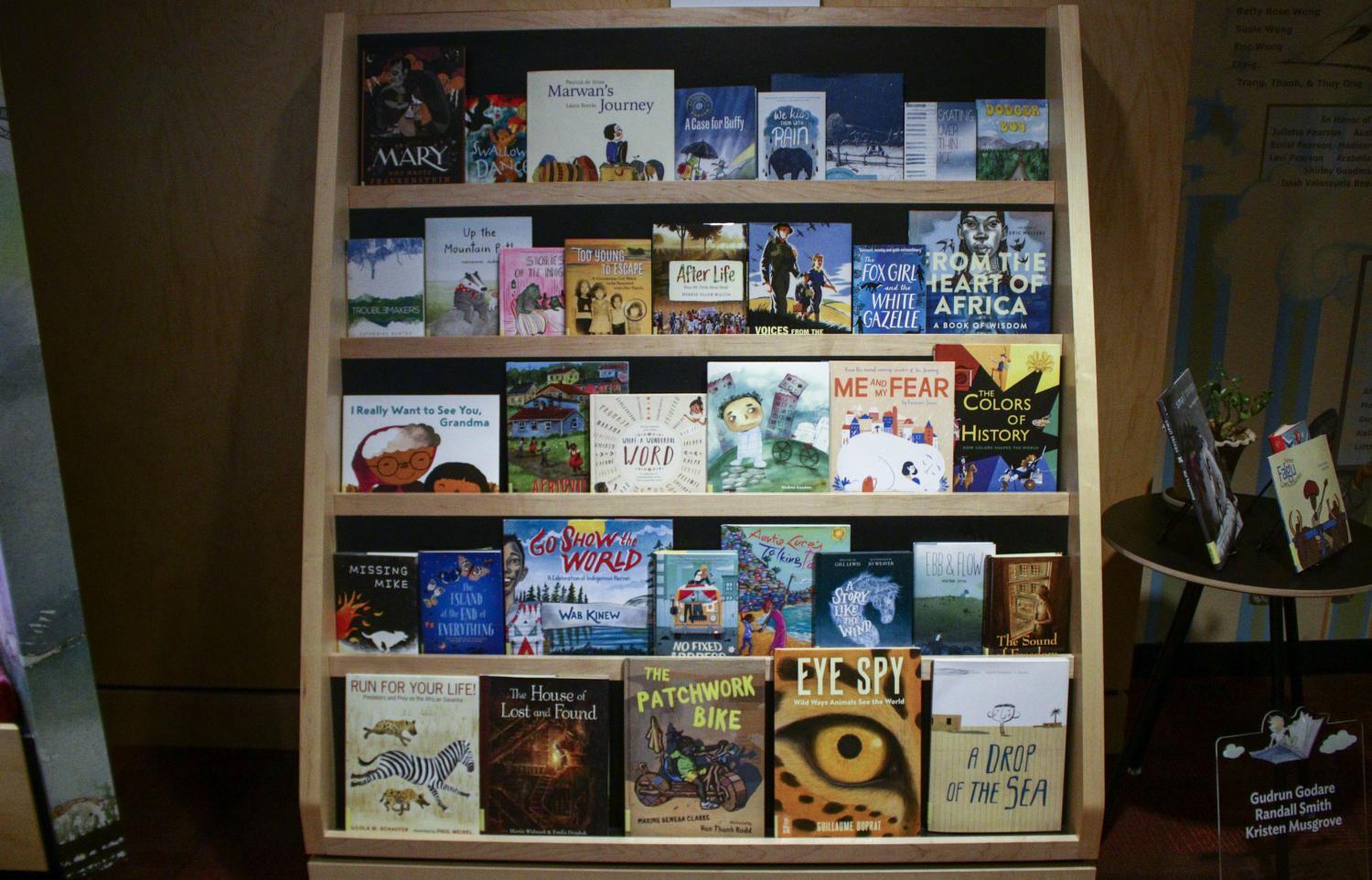 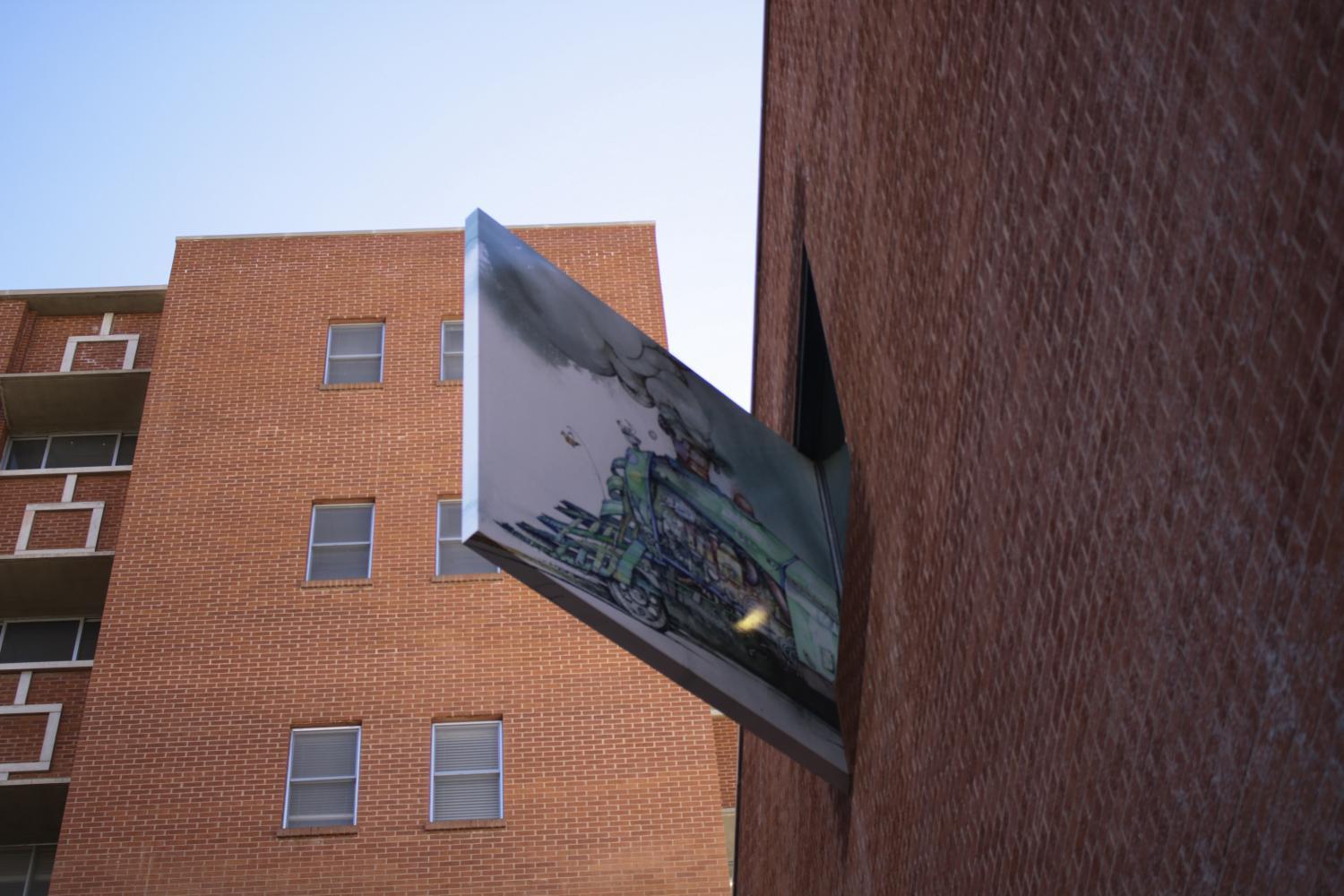