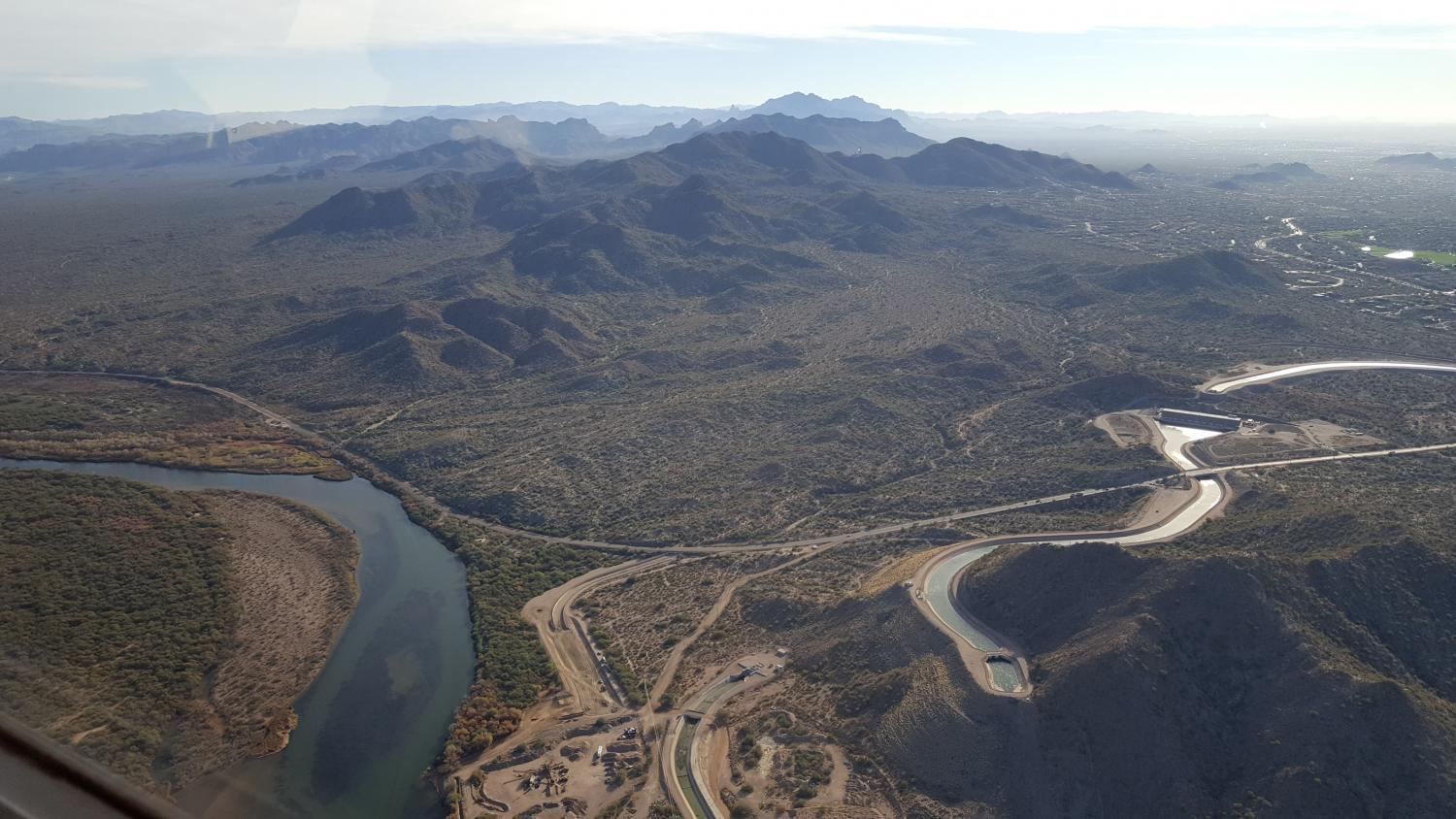 Steve Skotnicki
View above Granite Reef Dam, east to the Usery Mountains, which the Salt River (left) likely crossed to flow into the East Valley and beyond. The CAP canal (right) pumps Colorado River water uphill, where it then flows via the East Valley toward Tucson.

In Medieval Europe, all roads led to Rome. In Arizona, all rivers lead to the Colorado.

In fact, it's no exaggeration to say the state of Arizona lies almost entirely within the Colorado River drainage basin, which also sprawls across southwestern Wyoming and down through parts of Utah, Colorado, Nevada, California and New Mexico.

Were it not for the vast system of dams and irrigation systems that lock up their waters and put them to work, the Gila and Salt Rivers, along with the Verde River to the north, would drain the Mogollon Rim and mountain ranges, wash their waters down through the canyons and valleys and deliver them into the Gulf of California. 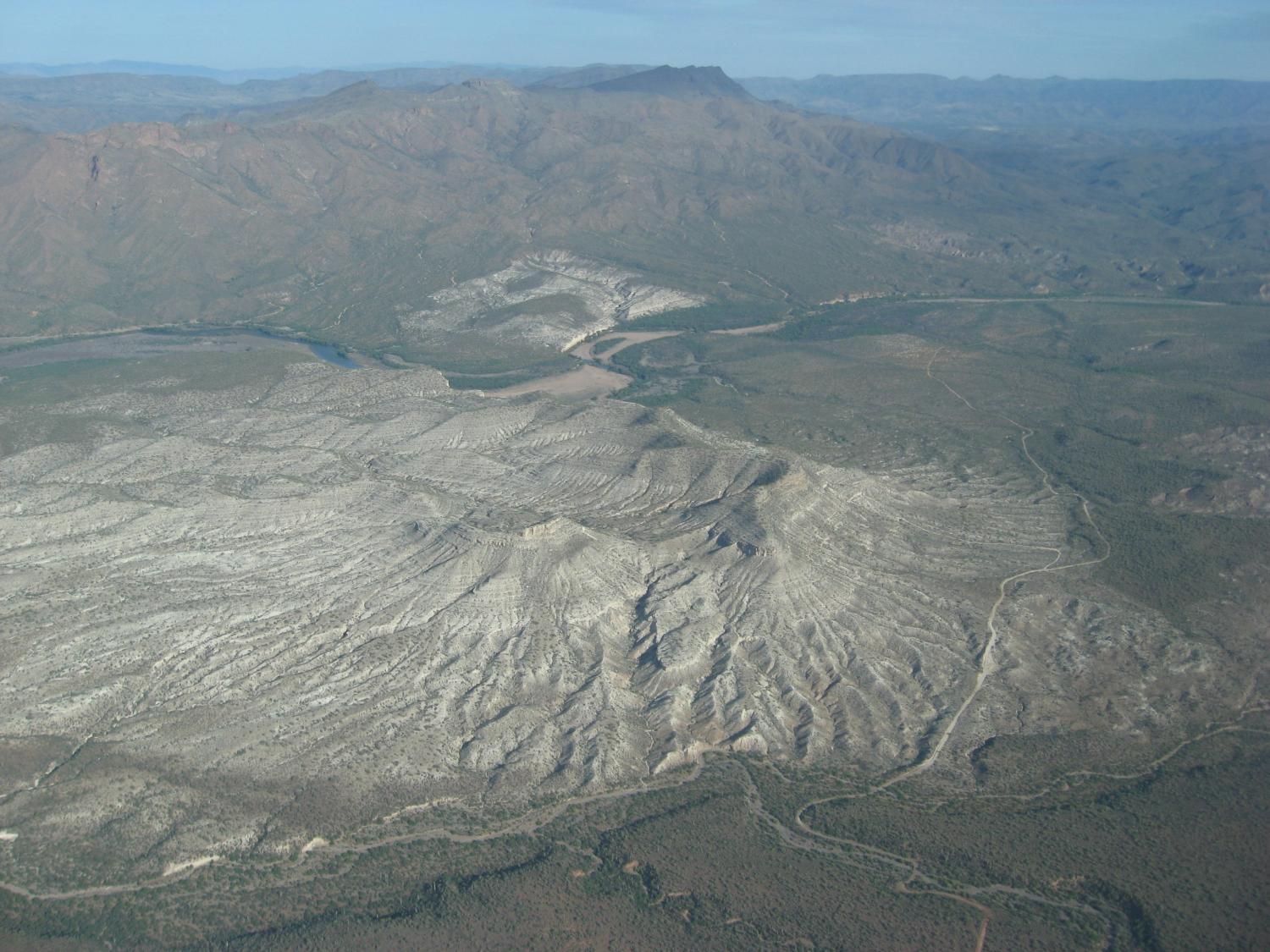 "They provide the exodus of water across highlands to lowlands and eventually all of these rivers in the Valley go to the Colorado River, and that goes to the Pacific Ocean," said Brian Gootee of the Arizona Geological Survey.

Gootee is versed in reading landscapes and traces of ancient rivers. Erosion, like a rookie cop trampling a crime scene, has left few such clues undisturbed, but also washed its share of evidence into the Valley of the Sun.

"We know this much: We know that this place did collect thousands and thousands of feet — up to 12,000 feet — of sand and gravel and silt and clay and mud and salt."

After the thrusting, faulting and tectonic taffy-pulling that formed the Basin and Range 25-20 million years ago, but before the Salt River arrived, the Valley acted like a vast collection plate.

South Mountain, the Estrellas, the San Tans, the White Tanks, the Sacaton Mountains, the McDowell Mountains: All were beginning to form, but the miles-deep depressions separating their uplifted blocks had not yet filled in.

"Originally the area around Phoenix was just a closed basin. It didn't have any outlet to the sea, and so water that fell into the mountains just flowed into the middle of the basin and accumulated there," said Arizona State University geologist Steve Reynolds.

Then, around 2-3 million years ago, the big rivers appeared.

A nameless ancient stream carved several levels of stream terraces within the Tonto Basin as the water level dropped following the spillover near Roosevelt Dam that helped create the Salt River. (Steve Skotnicki)

The timing roughly corresponds to the onset of the wetter, colder Quaternary period around 2.6 million years ago, but no direct evidence yet links changing climate conditions to the formation of the rivers.

"The question is, well, which one came first? Did they all come first? You know, what's the time frame? And we do know that not all of them came at the same time. But as far as answering when they started to come, it's always been vague," said Gootee.

"During drilling projects, that's one of the few times when we can bring those materials back up to the surface to look at. They contain a wealth of information."

Sorting those rocks by type and proportion yields a "sediment fingerprint" of the Salt River's earliest deposits. Together, these samples and river deposits found elsewhere in the state offer a sketch of where the rivers first arrived, and when.

"They arrived pretty suddenly, because they're sitting on these closed basin deposits and then, all of a sudden, you have a river deposit," said Gootee. 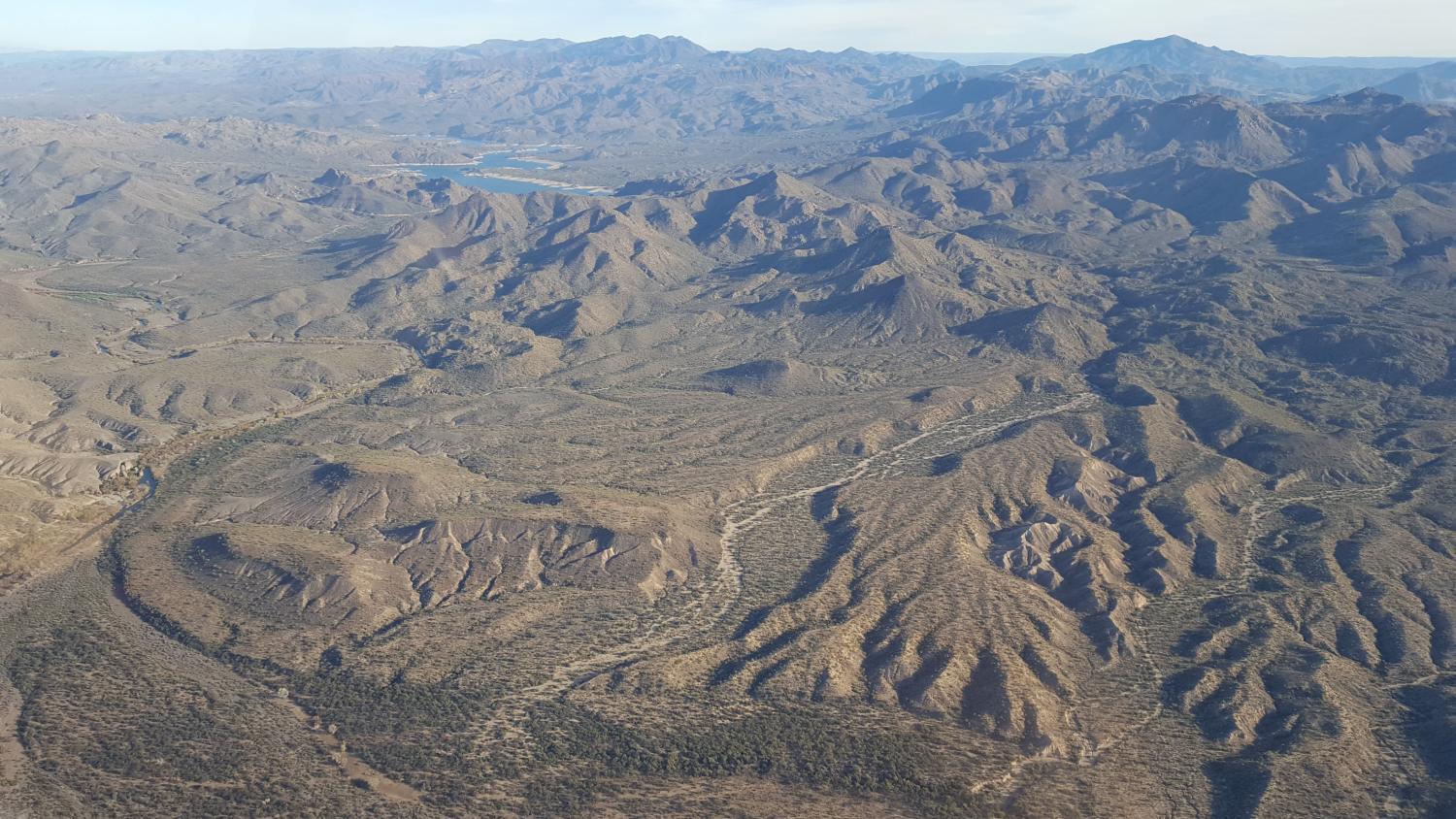 Steve Skotnicki
An air photo of the Verde River looking northeast towards Bartlett Lake. Like a series of bathtubs overflowing, the ancient Verde likely overtopped its Verde Valley origin, then Horseshoe basin and finally the site of today's Bartlett Dam.

All three rivers appear to have originated in vast basins that filled up and eventually overflowed or burst.

"Water from higher in elevation spilled over low parts in mountain ranges, and the river then started cutting through those hard bedrock pieces extending their reach down," said Reynolds.

The Salt River's birthplace is preserved today as Roosevelt Lake, which overflowed across surrounding mountains and into the next lowest place: the East Valley.

"It amazingly made it through the Superstition Mountains, cutting the gorge, made its way south of Fountain Hills out into the Valley, probably originating near Granite Reef Dam," said Skotnicki.

This high-energy torrent, loaded with cobbles and boulders, followed quite a different path than today.

When this track became untenable, the Salt swung west from the Papago Buttes, assumed its modern course and began downcutting. This process formed a series of terraces, each marking a former level of the river.

"As you come out of the Salt River, and as you go either to the south or to the north, you rise up through this series of levels, each one of which is an old terrace deposited by the river," said Reynolds.

Today, from where it emerges from the union of the Black and White Rivers southwest of Fort Apache, the Salt River runs roughly 200 miles westward through Phoenix to near Estrella Mountain Regional Park, where it joins the Agua Fria River and adds its waters to the Gila.

The Gila River, which today drains half the state, also once pursued a different path.

Today, the river's headwaters lie near the Gila Hot Springs and Gila Cliff Dwellings National Monument in southwestern New Mexico. From there, its waters mingle with those of the San Francisco, San Pedro and Santa Cruz Rivers as it runs 630 miles to link up with the Colorado River at Yuma.

But the ancient Gila likely arose in Safford Basin, located in and around the San Carlos Indian Reservation.

A row of rolling linear hills (middle of image) composed of pebbles and cobbles deposited by a river that flowed through the area prior to the Salt River. Saguaro Lake is visible in the background. (Steve Skotnicki)

"That system appears to have ended around 3 million years ago. And then we see the Gila River deposits in Florence abruptly arrive," said Gootee.

Not long ago, great lengths of the Gila used to flow year-round. Today, the river is dry for much of its length, depending on runoff and demand, because Coolidge Dam — like Roosevelt and other dams on the Salt River — stores much of its water.

However, a riparian conservation area near the New Mexico border, where it receives influxes from the San Francisco River and various springs, retains water year-round. So does a zone near the San Carlos River confluence and an area downstream of where the Gila joins the Salt, where Phoenix-area treatment plants discharge treated wastewater. White limestone still marks the birthplace of the Verde: a vast lake that once stretched from Chino Valley to Strawberry.

Today, the Verde River originates from a series of springs 20 miles north of Prescott in the Big Chino Valley. A number of tributaries, most notably Oak Creek, join the river as it plunges thousands of feet over its 185-mile journey to join the Salt River in the northeast corner of the Salt River Reservation.

The Verde, which flows freely before reaching Horseshoe and Bartlett Dams, is one of only two Arizona watercourses to receive the "Wild and Scenic River" designation. The other is Fossil Creek, which feeds into the Verde.

Arizona's rivers are chronicled in the geology of its land and the history of its peoples, from the Verde's Sinagua cliff dwellings to the Salt's Hohokam canals and the Mogollon Culture of the Gila headwaters. It is a saga we are still reading and, through our dams, diversions and the depredations of climate change, rewriting. 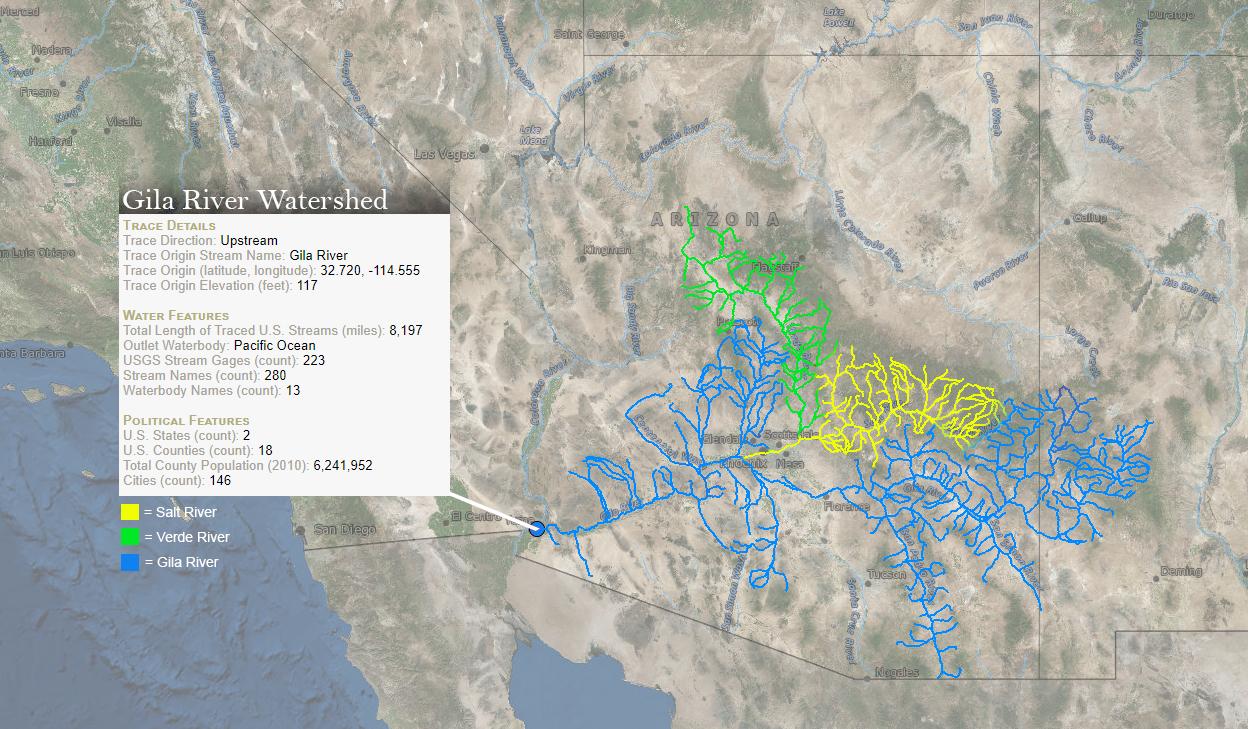